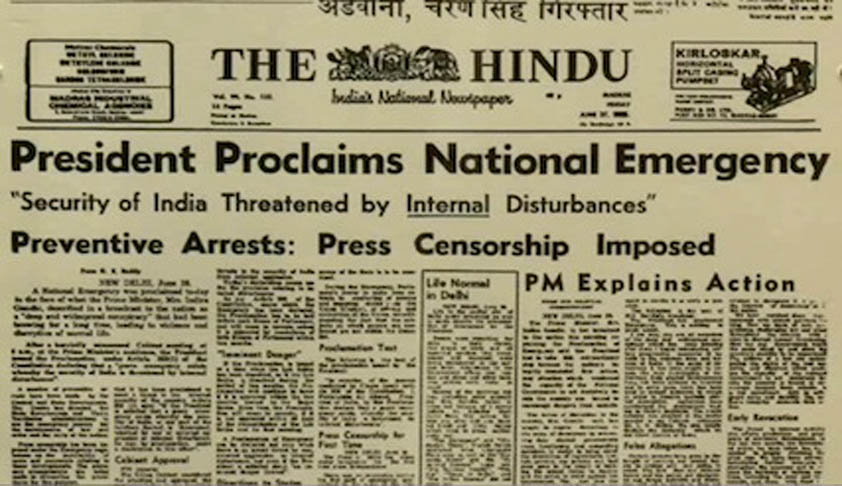 It has been 39 years since the ill-fated day in the Indian history, when political expediency presided over rule of law and emergency was declared. It was that period of free India which exists as the biggest blotch on democracy.It all began with the High Court of Allahabad declaring Indira Gandhi’s election to the Lok Sabha, void on grounds of electoral malpractice. Indira Gandhi had won...

It has been 39 years since the ill-fated day in the Indian history, when political expediency presided over rule of law and emergency was declared. It was that period of free India which exists as the biggest blotch on democracy.

It all began with the High Court of Allahabad declaring Indira Gandhi’s election to the Lok Sabha, void on grounds of electoral malpractice. Indira Gandhi had won her 1971 election from Rai Bareilly against the Socialist Leader Raj Narain. Raj Narain had filed an election petition in the Allahabad High Court challenging the validity of Mrs. Gandhi’s election. His lawyer in the Allahabad High Court was Shanti Bhushan. On June 12, 1975, Justice Jagmohan Lal Sinha found the sitting Prime Minister of India Mrs Indira Gandhi guilty. He declared her election “null and void” and forbade her from fighting elections for six years.

In his brilliant essay, Justice with a Fine Balance, the noted lawyer AG Noorani discloses the concluding words of Justice Sinha: “I regret my inability to accept her evidence, on one point; her plea has no legs to stand on, on another; and that it does not bear any scrutiny, on a third.”

“Justice Sinha”, wrote Noorani, “was heir to the older tradition – dispensing justice according to the law, not personal whim or political philosophy. They do not make men like him anymore.”

She then got surrounded by appeals from all corners to resign. On June 24, 1975, Justice Krishna Iyer granted a conditional stay of the order on the usual terms. Indira Gandhi could not vote or participate in the proceedings as a Member of Parliament but could sign the Register of Attendance to save the seat. She could participate in the proceedings as Prime Minister, but without a vote. “There will be no legal embargo on her holding the office of Prime Minister,” Justice Krishna Iyer pointedly added. He referred to the dharma of politics and insisted that equal protection of the law could not make a difference in favour of the Prime Minister, the great proposition being ``Be you ever so high, the law is above you.'' Justice Krishna Iyer recalls the darkest hour of the Supreme Court when except Justice (H R) Khanna, the other four judges of the Bench upheld the Emergency with all its macabre implications. That was the darkest hour of the Supreme Court. Justice Krishna Iyer rightly stated that if the Dred Scott case decided by the US Supreme Court upheld slavery, our court was in soulful company when upholding the Emergency.

The very next day, in the dead of night, Indira Gandhi imposed Emergency, imprisoned leaders of the Opposition and imposed press censorship.

On August 5-6, the Election Laws (Amendment) Act was enacted to amend the law retrospectively and power to disqualify an elected candidate was solely vested in the President, excluding even the Election Commission. On August 7-8, Parliament enacted the Constitution 39th Amendment Act, 1975. Its effect was to exclude the court’s jurisdiction on disputed elections to higher offices, including the Prime Minister’s, but without setting up an alternative forum. At about 11pm she, accompanied by Siddhartha Shankar Ray, West Bengal’s chief minister and a leading lawyer, went to Rashtrapati Bhavan to get President Fakhruddin Ali Ahmed’s signatures on the Emergency proclamation. Ray explained to him that the prime minister’s word was enough. No cabinet resolution was needed. The president complied.

Within a matter of minutes, people standing in opposition, including Morarji Desai and JP Narayan were awaken from their sleep and arrested.

The Government was suddenly  became all-powerful, mighty with absolute powers without checks. As John Grigg wrote in The Spectator, “Nehru’s ‘tryst with destiny’ seemed to have been turned into a tryst with despotism — and by his own daughter”. Others commented that with a single stroke of a “pliant president’s pen”, the world’s largest democracy was reduced to a “tin-pot dictatorship”, the likes of which then thrived in the Third World.

All the newspapers were subjected to pre-censorship. No news critical of the Government could be published. The right to oppose the Government was taken away. No protests were allowed anywhere in the country.

The Supreme Court in the habeas corpus case ruled that even though political detainees have been illegally detained, they have no right to approach the court and seek relief. The Government took the position that even if a detainee was physically killed, he could not approach the court.

Civil rights stalwart Rajni Kothari describing this period, states that, “It was a state off-limits, a government that hijacked the whole edifice of the state, a ruling party and leader who in effect treated the state as their personal estate. It was the imposition of a highly concentrated apparatus of power on a fundamentally federal society and the turning over of this centralized apparatus for personal survival and family aggrandizement. It was one big swoop overtaking the whole country spreading a psychosis of fear and terror with the new upstarts (Sanjay and all) storming away through whatever came their way, pulling it all down and calling boo to it all. And it happened in this country after 28 years of democratic functioning”.

July 1975 Review paper by the Government explained: “The declaration of Emergency and the various actions taken by the Government to restore discipline, order and stability in the country have been welcomed by people from various strata of Indian society. The Prime Minister has said that the attempt of the Government is to put democracy back on the rails.”

But the citizens weren’t impressed. They asserted their mandate in early 1977, after the end of the Emergency and dethroned the Congress government, an Opposition combine came to power with near two-third majority.

Even after 39 years since the darkest hour of Indian democracy, the remnants of such a situation have still been evident. When the state threatened Maoist sympathizers with imprisonment under the repressive Unlawful Activities (Prevention) Act, civil rights activists retorted: “We consider this as an attack on civil society reminiscent of ‘Emergency’ era.’

In the gruesome Bhopal episode, those faulting Rajiv Gandhi for the ‘escapade’ of Union Carbide chief Warren Anderson were dubbed as ‘unpatriotic’ by Congress minions, reminiscent of Emergency days when anyone criticizing Indira Gandhi was imprisoned.

The disgraceful amendments to the election law survive to this day. The revised definition of “candidate” survives. He becomes one only when he files his nomination papers (Section 79 b), even if he has spent a fortune earlier on his campaign or committed other abuses. Under a new Explanation 3 in Section 123, resignation of a government official takes effect on its publication in the official gazette.

There have been several promises since then. On September 12, 1979, Chief Election Commissioner S.L. Shakhdhar called for their repeal. In June 1977, Parliament passed a Bill restoring to the Supreme Court the power to decide disputes relating to presidential and vice-presidential elections. The Bill was supported by all sections of the House, including the Congress. Law Minister Shanti Bhushan said that he proposed to bring forth a comprehensive measure on the reform of the election law. His article on Independence Day cited the amendments to the election law and the Constitution, among “the more glaring distortions” of the former regime.

In his address to Parliament on March 28, 1977, acting President B.D. Jatti said that the government would take steps to secure the repeal of the amendments which “defined corrupt practices and afforded protection to electoral offences by certain individuals by placing them beyond the scrutiny of the courts”. Such a measure was promised in the Janata Party’s manifesto as well. The pledges were listed along with others for the repeal of the repressive laws. They were broken.

Even after 4 decades, the future course of action is muddled with remnants of the hour that was. The blotch on the world’s biggest democracy remains, as do the survivor antiquities of the era. Winston Churchill’s famous quote “Those who fail to learn from history are doomed to repeat it” sums it up our situation well. The popular mandate brought Mrs. Gandhi to power, and the same overthrew her, reinstating their power. This will be done whenever a similar power rises to destroy the country’s democratic makeup, that is if the lessons are still unlearnt.

The controversial supersession of Justice Hegde was another unfortunate episodes in the history of Indian judiciary. On April 25, 1973 the then Prime Minister, Indira Gandhi, superseded three senior Supreme Court judges- J.M. Shelat, A.N. Grover and K.S. Hegde and appointed A.N. Ray as Chief Justice of India. Hegde resigned in protest.

The reason for this supersession was that when Mrs. Gandhi appealed in Supreme Court against the admission of certain evidence in the Indira Gandhi election case from Allahabad High Court, the SC had ruled that the evidence is admissible. The judge who led the bench was K.S Hegde. The PM and her advisers didn't want a similar fate in her appeal to the Supreme Court. Next to have a similar fate was Justice Grover. Even he did not have a pro-government record, so he too was superseded.

This time it’s Mr. Gopal Subramanium who has been denied his due, the post of a Supreme Court judge which he rightly deserved. He blames his independence and integrity for the denial. Differences between the organs of the Constitution cannot be trounced. It is in fact, the core theme of democracy to debate on the debatable issues and determine them in the best interests of the people. However independence of the Judiciary cannot be trumped for achieving the same.
TagsArticle 352 of the Constitution Election Laws (Amendment) Act Former Prime Minister Indira Gandhi Justice (H R) Khanna Justice Krishna Iyer Justice Sinha Lok Sabha National Emergency in India President Fakhruddin Ali Ahmed Socialist Leader Raj Narain Unlawful Activities (Prevention) Act
Next Story
Similar Posts
+ View more
Law Firms
+ More