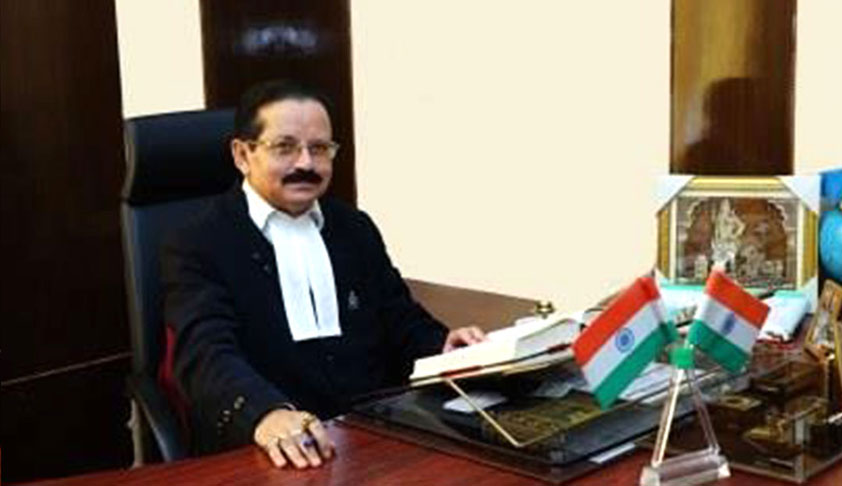 The Division Bench of Meghalaya High Court on Monday stayed the proceedings before Justice S R Sen for enhancing the post-retirement benefits for judges. This was after Justice Sen had served contempt-notice on Chief Secretary and other officials of the Government for failing to comply with his orders within time.Justice Sen was in news last week following his controversial observations in...

The Division Bench of Meghalaya High Court on Monday stayed the proceedings before Justice S R Sen for enhancing the post-retirement benefits for judges. This was after Justice Sen had served contempt-notice on Chief Secretary and other officials of the Government for failing to comply with his orders within time.

Justice Sen was in news last week following his controversial observations in a judgment that India should have been declared a Hindu nation and that only PM Modi can stop India becoming an Islamic nation.

"Government is directed to revise the said rule as follows:“Retired Judges/Spouse/Children”. So, it means that they should include Spouse and Children also for medical treatment", he ordered.

Justice Sen also wanted protocol service and guest rules to be extended to retired judges. He noted in the order of December 5 that protocol service and guest rules covered retired judges initially. It was further noted that they were "suddenly withdrawn" by an amendment passed on October 4, 2018.  "It is unfortunate that such amendment was made without consultation with the High Court. Accordingly, the Notification dated 4th October, 2018 is hereby set aside", said the order.

He issued directions to the GAD Department to make Protocol Service as well as the Meghalaya State Guest Rules at the same tune and equal facilities to be provided as is applicable to sitting Judges including Spouse/Children.

Further, Justice Sen observed that the Full Court resolution passed on February 20, 2018 had made the demand for enhanced domestic help. But, the resolution was sent back by Government for reconsideration by the Full Bench. Justice Sen said that he was leaving the matter to the discretion of the Government. However, he ordered that domestic allowances should include spouse and children of the retired judges.

Justice Sen also made a reference to reimbursement of phone bills. The Full Court resolution had fixed the limit of phone bills for retired judges as Rs.10,000/-. He directed the Government to issue a notification with immediate effect in that regard. "That means Retired Chief Justice and Judges will be entitled for Rs. 10,000/- (Rupees ten thousand) only per month for Mobile bill, Landline and Internet bills etc., as well as to fix Mobile @ Rs. 80,000/- (Rupees Eighty thousand) only for the Judges", the order said.

It was further mentioned that one and a half month ago, the Chief Justice had convened a meeting comprising of Chief Secretary, Addl. Chief Secretary, GAD and Law Secretary, Govt. of Meghalaya. But, nothing further happened after that. Justice Sen ordered that the whole exercise should be completed within a week. He warned that failure of contempt will attract contempt proceedings.

On December 13, when the matter was posted next, Justice Sen noted that nothing was done within the period of one week granted as above. This led the judge to issue show-cause notice against the Chief Secretary, Additional Chief Secretary in charge of GAD and Law Secretary for contempt action. They were directed to be personally present before the Court on December 17.

In this backdrop, the Government rushed to the Division Bench by filing appeal.  The appeal was considered by the bench of Chief Justice Muhammad Yaqoob Mir and Justice H S Thangkhiew on Monday. The Advocate General undertook before the Division Bench to carry out necessary amendments to cover the spouse and children of retired judges under medical benefits within a month. With regard to other directions passed by Justice Sen on December 5, the Advocate General sought for a month's time for having clear instructions.

Taking note of the submissions, the Division Bench stayed the proceedings before Justice Sen.

The directions by Justice Sen for hiking post-retiral benefits came under criticism of a local daily, Shillong Times. In a report published on December 10 tiled "When judges judge for themselves" , Shillong Times commented that "the recent order of Justice Sen to provide facilities for retired judges and their families is reminiscent of the order passed by former Chief Justice of Meghalaya Uma Nath Singh and former judge justice TNK Singh".

Shillong Times was served with show-cause notice by Justice Sen for contempt action for the above report. The newspaper's editor Patricia Mukhim and publisher Shoba Chaudhari were asked to appear before Justice Sen on December 13.

According to The Scroll,  the notice stated that it was “shocking that the publisher and editor of said newspaper without knowing the law or background of the case is making comments which is definitely derogatory to a judge who is handling the case as well as the entire judges’ community”. It further said that the “media is no one to dictate the court what the court should or should not do”.

As per a report in The Wire, Mukhim was asked by Justice Sen about her educational qualifications. On being told that she is BA (Hons) and B.Ed, the judge in the open court said, ‘you are not fit to be a journalist, not qualified.’ She was also asked who appointed her. On being told that the newspaper’s management did, the judge retorted, ‘The management should also be put in jail.’

The matter was then referred to the bench of Chief Justice. It stands posted to February 5, 2019.

Justice Sen had observed in a judgment last week "I make it clear that nobody should try to make India as another Islamic country, otherwise it will be a dooms day for India and the world. I am confident that only this Government under Shri. Narendra Modiji will understand the gravity, and will do the needful as requested above and our Chief Minister Mamataji will support the national interest in all respect”

He also observed that "…Pakistan declared themselves as an Islamic country and India since was divided on the basis of religion should have also been declared as a Hindu country but it remained as a secular country.”

The observations came in a case relating to grant of domicile certificate to an army recruit. Justice Sen exhorted that regulations should be eased to grant citizenship to Hindus immigrating to India from other countries.

After these observations drew widespread criticism, Justice Sen issued a clarification on December 14 stating that he was not a religious fanatic and that he had no political affiliations.