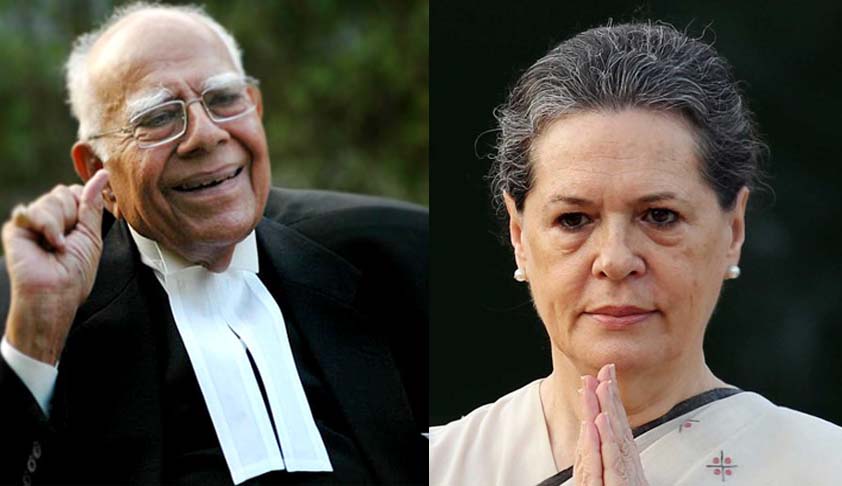 Mr. Ram Jethmalani's blog has brought to light letters exchanged between him and Congress Chief Sonia Gandhi.In the letter dated December 10, 2015, Mr. Jethmalani had expressed disappointment with the disruptions in the Rajya Sabha. "As a senior practicing Counsel and Parliamentarian I am not happy with what has been happening in the Rajya Sabha for the last few days. The institution...

In the letter dated December 10, 2015, Mr. Jethmalani had expressed disappointment with the disruptions in the Rajya Sabha. "As a senior practicing Counsel and Parliamentarian I am not happy with what has been happening in the Rajya Sabha for the last few days. The institution of Parliament is suffering total loss of public respect. This does not augur well for Indian democracy," he wrote.

He then wrote that while he had "no reason" to doubt Mrs. Sonia Gandhi's stand that the prosecution against her and her son was false and malicious, he felt that the same needs to be established in Court and "not by tumult and disorder in the Rajya Sabha".

He had then offered his services to her, and wrote, "Make no mistake; I neither need any fees not any other favour from you. My services will be service to the nation. I am an expelled member of the BJP and you know my role in the recent Bihar elections. I hope you will allow the Parliament to function the normal way."

The disruptions however continued, and Mrs. Gandhi failed to acknowledge his letter. He then wrote to her again on December 12, stating, "I hope I stand relieved from my promise to you."

Incidentally, the blog also has a letter from Mrs. Gandhi dated December 11, acknowledging his communication and stating, "I appreciate your kind offer of assistance".

Mr. Jethmalani's letter was written days after the Delhi High court dismissed the petitions filed by Congress President Sonia Gandhi and Vice President Rahul Gandhi challenging the summons issued by a Trial Court on a Criminal Complaint filed by Dr. Subramanian Swamy. The Court also dismissed the plea to dispense with the personal appearance of the Accused before the Trial Court.

Mr. Subramanian Swamy had alleged that they had fraudulently acquired Associated Journal Ltd. (AJL) that used to publish the now redundant National Herald newspaper, and transferred its assets worth crores of rupees to another company, Young Indian. You may read the LiveLaw story here.

In one of the letters written to the Times of India, Mr. Jethmalani has slammed the article published by the news house on the issue. He wrote, "I am both shocked and confirmed in my growing conviction that you can stoop very very low in your reporting news about people whom you do not like by the manner in which you have reported the contents of my letter dated 10th December, 2015 to Mrs. Sonia Gandhi."

In its article titled, Ram Jethmalani offers Herald help, Sonia Gandhi yet to accept it, TOI had failed to publish the first two paragraphs of Mr. Jethmalani's letter, which he condemned as being driven from their "diabolical motivation".

Justifying his stand, he wrote, "I did not give a certificate of innocence to the lady, it is not the role of a lawyer. A lawyer is not entitled to refuse to defend any one merely because he believes him to be guilty. This is prohibited by express statutory rules of Professional Conduct framed by the Bar Council of India and known to everyone who claims to be educated. I hope you will have the decency to publish this letter without any subtractions or additions."