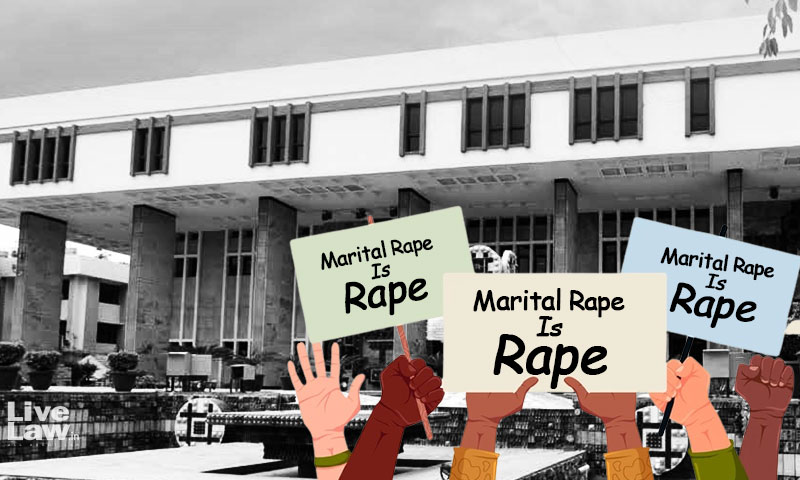 The Delhi High Court on Monday reserved it's judgment in a batch of petitions challenging the exception to Section 375 of the Indian Penal Code, which exempts forceful sexual intercourse by a man with his own wife from the offence of rape. A bench of Justice Rajiv Shakdher and Justice C Hari Shankar reserved the order while asking the counsel for the parties to file their respective...

The Delhi High Court on Monday reserved it's judgment in a batch of petitions challenging the exception to Section 375 of the Indian Penal Code, which exempts forceful sexual intercourse by a man with his own wife from the offence of rape.

A bench of Justice Rajiv Shakdher and Justice C Hari Shankar reserved the order while asking the counsel for the parties to file their respective written submissions and convinience compilations by March 2, if any.

The development came after Solicitor General of India Tushar Mehta apprised the Court that the Central Government was awaiting the response of other State Governments and stakeholders seeking their comments on the issue.

Mehta argued that hearing in the matter should be deferred till such time the inputs are recieved from State Governments and stakeholders.

He apprised the Court that the Centre had written a letter earlier this month to Chief Secretaries of all the States as well as the Chairman of National Commission of Women.

Mehta submitted while the Central Government has reiterated it's stand that it is committed to maintain and protect the dignity and liberty of every woman, he added that the question involved in the petitions is not merely a constitutional question relating to regular statutes but the same has far reaching consequences.

He added "There are several constitutional challenges but there are very few which impact social life, family life etc. Generally when a statute is under challenge, we take one position or other depending on statements of object and reasons or the settled law. There are very few cases where such wide implication is found. Therefore it's our stand, it's for your lordships to consider, that our stand we will be put only after consultation. We find it to be not prudent without consulting stakeholders."

Accordingly, the Court recorded the following in the order:

"We have indicated during the course of hearing to Mr. Mehta that in an ongoing matter that may not be possible as there is no terminal date when consultation process will get over. Since counsel for the parties have addressed arguments, judgment is reserved."

"List for directions on March 2. In the meanwhile, counsel for the parties will file written submissions and convinience complication."

In an additional affidavit filed dated February 3, 2022, the Centre had submitted that marital rape issue needed a comprehensive approach wherein a consultation process is undertaken with all stake holders including all the State Governments, rather than taking a strict legal approach.

Centre had said that while it is committed towards protection of liberty, dignity and rights of every woman who is the fundamental foundation and a pillar of a civilized society, however, it has been said that the question involved in the petitions "may not be treated merely as a question concerning constitutional validity of a statutory provision as the subject matter has and will have very far reaching socio-legal implications in the country."

"In the most respectful submission of the Central Government, considering the social impact involved, the intimate family relations being the subject matter and this Hon'ble Court not having the privilege of having been fully familiarised with ground realities prevailing in different parts of Society of this large, populous and diverse country, taking a decision merely based upon the arguments of few lawyers may not serve the ends of justice."

"The Deponent, therefore, reiterates that the hearing be deferred providing for a stipulated time line within which the Central Government would conduct an effective consultative process after which it will be in a position to assist this Hon'ble Court."

The Centre had earlier informed the Rajya Sabha that a process for comprehensive amendments to criminal laws in consultation with all stakeholders has been initiated by the government.

Accordingly, in the affidavit, Centre stated that:

"It is respectfully reiterated that if the matter which is pending since 2015 awaits such fruitful exercise for some time, no prejudice would be caused and it will be possible for the Central Government to assist the Court meaningfully and would be possible for this Hon'ble Court to take holistic view rather than deciding such a sensitive issue as a mere legal question based upon the submission of few lawyers."

Accordingly, Centre had said that matter needs a comprehensive approach rather than a strictly legal approach.

"As already pointed out on earlier occasions, the provisions of Section 375 and the socio-legal implications of grant of prayer made needs an exercise of a meaningful consultative process with various stake holders on several aspects. The State Governments are not before this Hon'ble Court. No other stake holders are before this Hon'ble Court other than few affected parties and the Central Government," the affidavit read.

Reports of previous submissions by parties can be read here:

Leave It To Trial Courts To Decide How Marital Rape Is Proved : Colin Gonsalves To Delhi High Court