Office Of Profit Row: Here Is What The Delhi HC Said While Setting Aside Disqualification Of 20 AAP MLAs [Read Judgment] 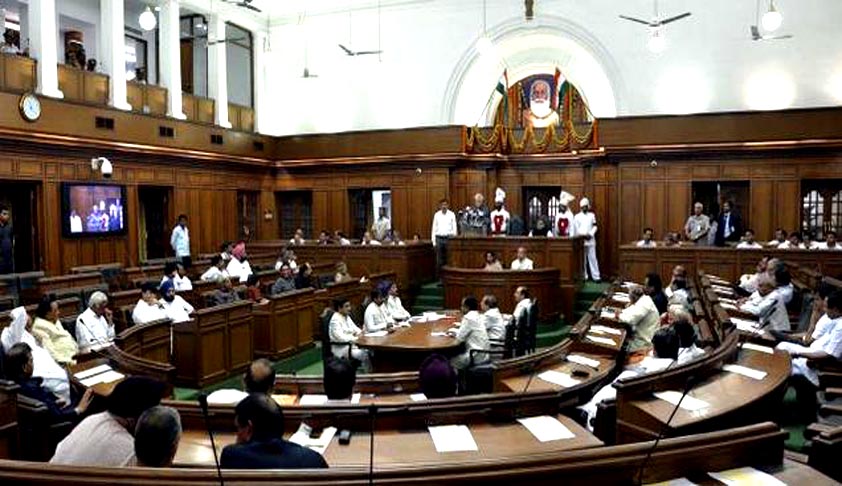 In a major relief for the Aam Aadmi Party (AAP), the Delhi High Court has set aside the Election Commission of India's (ECI) recommendation for disqualification of 20 Aam Aadmi Party (AAP) MLAs for holding office of profit.The Bench comprising Justice Sanjiv Khanna and Justice Chander Shekhar directed the ECI to take another look at the allegations, observing that the MLAs were not given an...

The Bench comprising Justice Sanjiv Khanna and Justice Chander Shekhar directed the ECI to take another look at the allegations, observing that the MLAs were not given an oral hearing before the ECI recommended their disqualification.

The Court noted that the ECI had pronounced its order more than six months after its last order, which had stated that the next date of hearing would be intimated. However, no such date was intimated to the Petitioners, and neither were they informed about the recusal and rejoining of Chief Election Commissioner, Mr. O.P. Rawat. This, the Court opined, vitiated the entire proceedings.

The MLAs had been appointed as Parliamentary Secretaries to the Ministers in March, 2015. The question of their disqualification had then been brought up by a petition filed in June, 2015 before the President. The Petition, filed by Mr. Prashant Patel, had sought their disqualification under Section 15 of the Government of National Capital Territory of Delhi Act, 1991. While the initial complaint was against 21 MLAs, Rajouri Garden MLA Jarnail Singh resigned from his post to contest elections against former Punjab Chief Minister Parkash Singh Badal in 2017 state election.

Around the same time, the Delhi High Court struck down the posts of Parliamentary Secretaries. The MLAs had then approached the ECI, contending that it shouldn't entertain the Petition against them, claiming that the High Court had already set aside their appointment as Parliamentary Secretaries. The ECI had, however, rejected this reasoning in June, 2017 and had recommended their disqualification.

Thereafter, the MLAs had scurried to the High Court for interim protection. The Court, however, refused to grant them relief and expressed displeasure over their conduct for the two years during the pendency of the proceedings before the ECI.

Justice Rekha Palli had rapped the MLAs for using their Petitions before the High Court as a shield to avoid participating in the ECI proceedings. However, during the pendency of the petition, President Ram Nath Kovind had approved their disqualification.

The Court, however, opined that the contention that Secretary to the President had acted on her own without the President's direction was "rather far-fetched and unconvincing". While noting that the letter could have been better worded, the Court asserted that such shortcomings would not negate the letter.

The Court further relied on the notification passed by the President approving the disqualification of the MLAs in January this year. It noted that the notification had clearly stated, "Whereas a reference dated 10th November, 2015 was made to the Election commission of India under Section 15 (4) of the Government of National Capital Territory of Delhi Act,1991."

The Court agreed with the ECI's reasoning that the Delhi High Court order would not matter as the de facto effect of the order appointing the Petitioners as Parliamentary Secretaries to the Ministers "would not be undone or erased merely because subsequently the appointment order was held to be wrong and illegal".

It explained, "Appointment of the petitioners as Parliamentary Secretaries vide order dated 13th March, 2015 is not disputed. If the petitioners had worked and performed their duty as Parliamentary Secretaries on appointment with effect from 13th March, 2015, the Court order more than a year thereafter dated 8th September, 2016 would not nullify or pardon the legal ill-effect and consequences thereof. No doubt, order dated 13th March, 2015 was struck down by the Delhi High Court vide order dated 8th September, 2016 as it was issued without concurrence or views of the Lt. Governor under Article 239AA of the Constitution, the Court order would not in any manner affect the factum that the petitioners were appointed as Parliamentary Secretaries."

Violation of principles of natural justice

Considering the contentions raised, the Court made reference to various provisions of the Representation of People Act, 1951 to assert that while ECI had the freedom to regulate its own practice and procedure, this procedure could involve sittings in which “hearings” would be held.

It then ruled that the inquiry proceedings for disqualification of members were, in fact, quasi-judicial proceedings. The procedure, it therefore said, should be "reasonable, fair and just", observing,

"The offshoot of the aforesaid discussion is that ECI exercises wide discretion, latitude and flexibility on the matter of procedure to be followed when examining whether an elected member has incurred disqualification, yet the procedure adopted and followed must be just, fair and equitable. This is inherent and forms the edifice and cornerstone of the discretion vested."

The Court, however, opined that an oral hearing need not be given where an opinion in favor of the elected member could be given at the initial stage itself. It then asserted that this might not be the case where opinion is rendered against the member.

It then noted that neither were the Petitioners provided with an oral hearing, nor were they informed about Mr. Rawat's recusal and rejoining. Thereafter, referring to the various judgments on the interpretation of the expression "office of profit under the Government", the Court asserted that the issued was a complex one and needed oral arguments and elucidation of the legal position and factual matrix.

The Court summarized its conclusions as follows:

"(i) Reference made by the President to the ECI is valid.

(ii) Order dated 23rd June, 2017 passed by the ECI is valid and in accordance with law.

(iii) Opinion of the ECI dated 19th January, 2018 is vitiated and bad in law for failure to comply with the principles of natural justice. Accordingly, Writ of Certiorari is issued quashing the said opinion dated 19th January, 2018 and the consequent order/notification dated 20th January, 2018 for violation of principles of natural justice, namely, failure to give oral hearing and opportunity to address arguments on merits of the issue whether the petitioners had incurred disqualification and also on account of failure to inform that Mr. O.P. Rawat had expressed his intention to rejoin proceedings after his recusal and lastly because Mr. Sunil Arora had not participated and no hearings were held before him.

(iv) Order of remand is passed to the ECI to hear arguments and thereafter decide the all-important and seminal issue; what is meant by the expression "office of profit held under the Government" and re-examine the factual matrix to decide whether the petitioners had incurred disqualification on appointment as Parliamentary Secretaries, without being influenced by the earlier order or observations on the said aspect in this order."