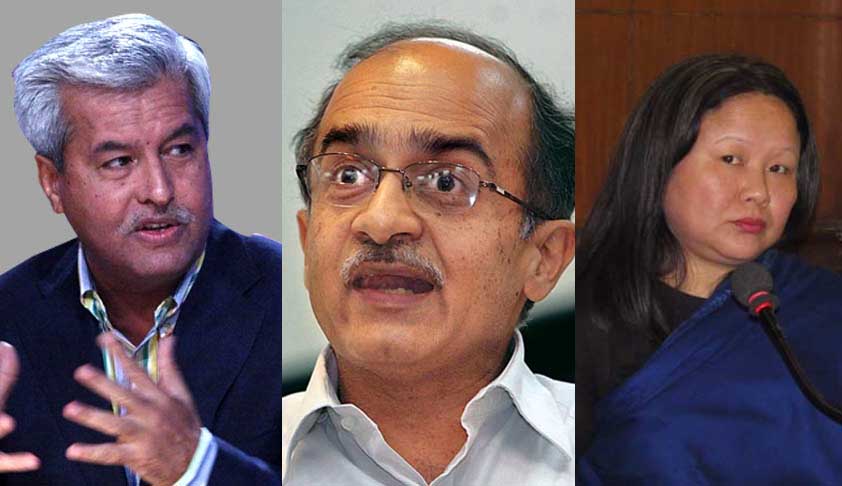 The Supreme Court has rejected a petition seeking contempt action against senior lawyers Dushyant Dave and Prashant Bhushan; and former chief minister of Arunachal Pradesh Kalikho Pul’s wife Dangwimsai Pul.Advocate Manohar Lal Sharma, who had filed the plea, alleged that the two lawyers forged documents with regard to Kalikho Pul's suicide and, hence, contempt action should be initiated...

Advocate Manohar Lal Sharma, who had filed the plea, alleged that the two lawyers forged documents with regard to Kalikho Pul's suicide and, hence, contempt action should be initiated against them.

Senior advocate Dushyant Dave had appeared for Dangwimsai Pul in a proceeding before the Supreme Court on February 23, when the court considered her letter to the Chief Justice of India as a letter petition. Dave criticised the bench and had withdrawn her letter.

Prashant Bhushan had participated in a press conference with Dangwimsai Pul and accompanied her to the office of the Vice-President of India for submitting a petition to him seeking his interference in the matter.

A division bench of Justice Adarsh Kumar Goel and Justice UU Lalit rejected the petition, holding that the petitioner has no locus standi.

"Contempt proceedings are our jurisdiction and no one should tell against whom the contempt action should be taken. The plea is dismissed,” it said.

On March 3, the apex court had refused to grant an urgent hearing on Sharma's PIL seeking an independent probe into the alleged suicide.

He had sought an urgent hearing of the plea, saying "a criminal conspiracy" was on to defame the highest judiciary of the country.

The plea also sought investigation into the role of lawyers who were allegedly espousing the cause of Pul's wife Dangwimsai Pul.

On February 23, Pul's wife withdrew her letter for CBI or NIA probe into the allegations leveled in her husband's purported suicide note against some former and serving persons holding constitutional posts and politicians.

Pul had committed suicide on August 9 last year. His body was found hanging in the official residence of the chief minister in Itanagar.

After months of intense political developments, Pul had taken over the reins of Arunachal Pradesh on February 19 last year, but had to relinquish the post five months later following a Supreme Court order in July.