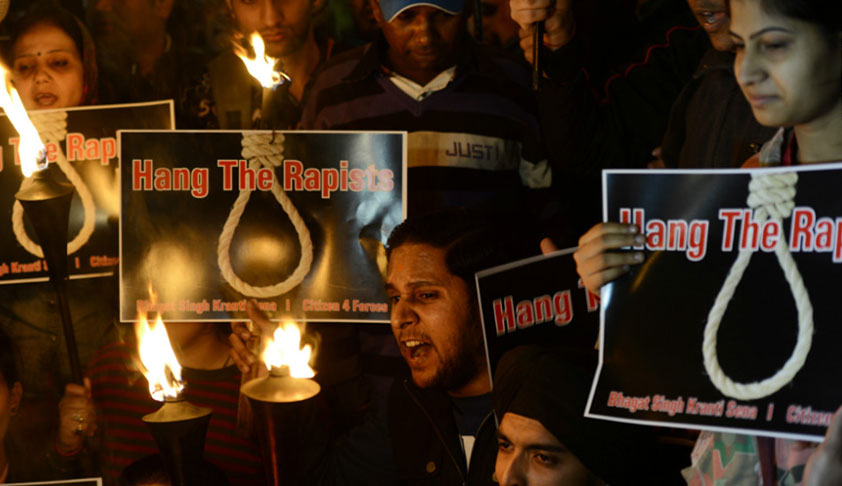 “Apart from the death penalty, a specific legislation providing for additional punishments like chemical castration of the offenders in the rarest of rare cases is the need of hour in such cases”, Supreme Court Women Lawyers Association representation to PMO At a time when anger over rape of minors across the across the country is at its peak, accentuated by the incidents in Kathua...

“Apart from the death penalty, a specific legislation providing for additional punishments like chemical castration of the offenders in the rarest of rare cases is the need of hour in such cases”, Supreme Court Women Lawyers Association representation to PMO

At a time when anger over rape of minors across the across the country is at its peak, accentuated by the incidents in Kathua and Unnao, the Supreme Court Women Lawyers Association (SCWLA) has filed a representation to the Prime Minister’s Office for bringing about chemical castration as an additional punishment for the offence.

It said further the term “child” requires to be defined, regard being had to the situation obtaining in the resent day society. “Definition of child must include both small girls and boys between age group of 0 months-12 years. Because in the recent past there have been uncountable incidents wherein small boys have also been sexually exploited and raped and have suffered untold pain and agony”, it said.

The PMO has forwarded the representation to the Woman and Child Development Ministry for “appropriate action”.

“Apart from the death penalty, a specific legislation providing for additional punishments like chemical castration of the offenders in the rarest of rare cases is the need of hour in such cases”, it said. The representation has been signed by senior advocate Mahalakshmi Pavani,  Bhakti Pasrija Sethi and Prerna  Kumari, the President, Vice President and General Secretary of the SCWLA respectively.

Castration is any action, surgical or chemical by which testicles of a male is made defunct. Surgical castration is bilateral orchiectomy (removal of both testes), and chemical uses pharmaceutical drugs to inactivate the testes. Castration causes sterilisation (i.e., prevents them from reproducing); it also greatly reduces the production of certain hormones, such as testosterone

“All the members of the Supreme Court Women Lawyers Association (SCWLA), Supreme Court of India are immensely appalled by the sudden rise of incidents of child rapes which is increasing alarmingly. These are atrocious, inconceivable and brutal sexual offences where certain psychologically and possibly psycho graphically perverted culprits have not even spared small babies, girls, and boys.

Recently the horrendous case wherein a little eight-year-old girl was abducted, raped, tortured and murdered in Rasana village near Kathua in the Indian state of Jammu and Kashmir in January, 2018 has come as a rude shock and the Unnao rape incident where even father of the victim was killed in police custody for raising a voice is equally atrocious”, it said.

“In a society which is civilized and replete with cultural values of thousand years old and respects child and human rights, child abuse and the rape of a girl child can never be tolerated, and the culprits deserve to be dealt with iron hands of law. The punishment is provided under Section 376 of the Indian Penal Code (IPC), 1860 in respect of a woman who is minor but there may be circumstances where more specific attention may be necessitous for dealing with the rapist of a small girl child”, it said.

It is to be noted that on January 13, 2016 on a similar plea by SCWLA, the Supreme Court had refused to direct the Centre to consider castration as an additional punishment and termed it as “unacceptable”.

Nevertheless, it asked the Centre to consider re-defining the term “child” considering that nowadays children between the ages of two and ten are increasingly becoming victims of sexual abuse.

SC had concluded stating that a law cannot be “based on emotions or sentiments” and thus, castration cannot be recommended.

The representation seeks introduction of new legislative provisions by the Parliament in addition to the recently introduced death penalty and other existing penal provisions in view of the alarming increase in sexual abuse of small girls and boys.

“The cases of child abuse and rape are increasing at an alarming speed and appropriate legislation in this regard is, therefore, urgently required. The law-making is in the domain and wisdom of the Legislature. We pray that parliament may kindly give serious attention to the points highlighted above and make an appropriate legislation at the earliest including chemical castration apart from Death Penalty”, said the representation.

“A representation received in this office from Supreme Court Women Lawyers Association is forwarded herewith for action as appropriate. Reply may be sent to the petitioner and a copy of the same may be uploaded on the portal”, the PMO said in its reply.

NOT THE FIRST TIME

In October 2015  Madras High Court had asked the Centre to mull castration as a punishment for those who rape children in order to deter sexual assaults on minors.

Justice N Kirubakaran of the court had also acknowledged that its recommendation could seem "barbaric, retrograde, stone-aged and inhuman," but said traditional laws were not enough to cope with such crimes.

The Madras HC was not the first to demand castration.

In 2011, Delhi sessions court judge Kamini Lau while suggesting chemical castration as punishment for rape had called for a nationwide debate on the issue. The judge had suggested the measure as an alternative sentence to imprisonment.

But in 2013, the Justice Verma Committee rejected the demand for castration, noting the punishment "fails to treat the social foundations of rape".

Justice Verma also said it would be unconstitutional and inconsistent with human rights treaties to expose citizens to the potentially dangerous medical side effects of castration without their consent.