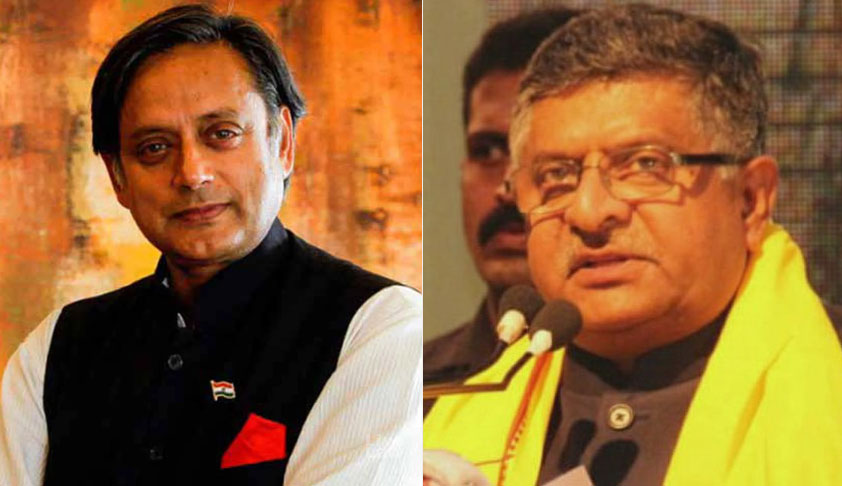 Alleging that the statements made by Union Law Minister Ravi Shankar Prasad in twitter are defamatory, a legal notice has been issued to him by Dr.Shashi Tharoor, MP of Thiruvananthapuram.

The controversy pertains to a tweet made by Prasad in the micro blogging site on October 28 in which Tharoor was termed as "accused in a murder case". The Law Minister also posted a voice clip of his press conference in which he had stated that Tharoor was "charge sheeted in a serious allegation of murder".  He alleged that Tharoor had insulted Hindus with his comments likening Prime Minister Modi to a "scorpion on a shiv linga".

In the legal notice by Tharoor issued through Advocate Suraj Krishna, Prasad's statements were denied as "untrue, false, scandalous and malicious". It was stated that Tharoor was neither charge sheeted for the offence of murder nor he was an accused in a case of murder.  "Being an eminent lawyer, yourself(Prasad) is well aware, when a Criminal Court frames Charge against an accused and yourself is well aware that in the ongoing criminal case against Dr. Shashi Tharoor in relation to the death of his late wife Sunanda Pushkar, the offence alleged by prosecution against him is not that of murder and the Hon'ble Court, which trying his case, is yet to frame any charge against him. Even the police charge sheet against Dr. Shashi Tharoor does not contain any allegations of murder", stated the legal notice.

The notice further stated that the comments were made with "some oblique motives" and that the intention was to "harm, tarnish and malign his reputation and to destroy his impeccable image that he enjoys among the public especially in view of the oncoming Lok Sabha elections".

The notice also clarified that Tharoor merely quoted the metaphor of "scorpion in a shiv linga" as told by an unnamed RSS member to journalist Vinod K Jose, which was reported in Caravan magazine in 2012.  "He(Tharoor) was just referring to the content of an old article which is documented and there in the public domain for nearly six years.The comment was not that of his and he was plainly quoting a journalist by clearly referring to the person who penned the lines that were published in a magazine".

The notice proceeds to state that the Law Minister has committed the offence of defamation, as he had "misused the content of Dr.Shashi Tharoor's speech and distorted it and deliberately and with a mala fide intnetion picked it out of context and misapplied it in your condemnable act to tarnish his reputation". The notice calls upon Prasad to tender unconditional apology within 48 hours and to delete the tweet and voice clips of the press conference to avoid legal consequences in civil and criminal proceedings.