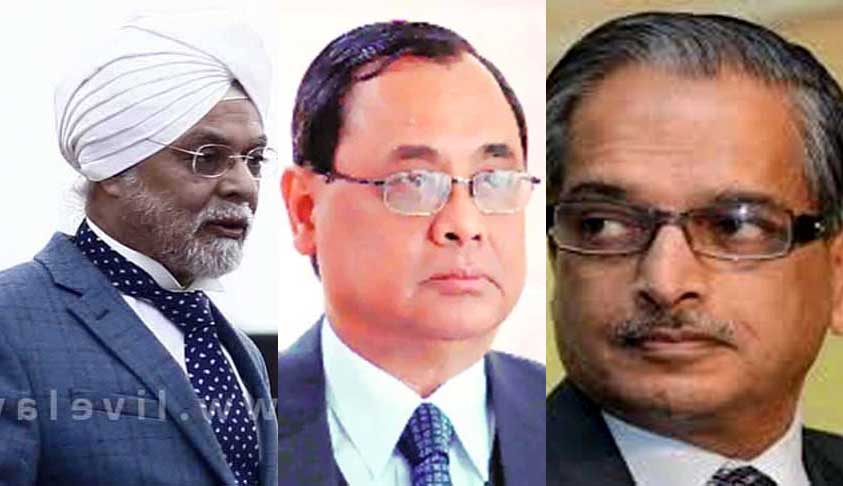 The French sociologist, Alexis de Tocqueville, who visited America in the 1830s had remarked: “Scarcely any political question arises in the United States that is not resolved, sooner or later, into a judicial question.”

The unravelling of the political situation in Goa, following the hung verdict in the assembly elections, could lead one to make a similar observation about the role of the Indian Supreme Court in it.

The Supreme Court, on March 14, was confronted with the question whether the Goa Governor, Mridula Sinha, was correct in appointing the BJP’s Manohar Parrikar as the Chief Minister, without consulting the leader of the single largest party, the Congress, which secured 17 seats in the assembly.

Although the BJP finished second by securing only 13 seats, it managed to secure the support of ten other MLAs, some of whom are independents or belong to the two regional parties.

The Supreme Court skirted the issue before it, and instead granted the petitioner, the Congress Legislature Party leader, Chandrakant Kavlekar, some relief by requesting the Goa Governor to advance the date of the assembly session for the floor test, to March 16th.

“The only agenda for the day would be, the holding of a floor test to determine whether the Chief Minister administered the oath of office, has support of the majority. The floor test shall be held on 16.03.2017, as early as possible, but surely during the course of the same day”, says the order issued by the Court on March 16.

The peaceful conduct of the Goa assembly session on March 16, and the result of the vote of confidence may vindicate both the Governor’s action and the Supreme Court’s decision on March 14.

But the Supreme Court’s order requesting the Governor to hold the assembly session on a particular day, and determine the day’s agenda, is deeply problematic.

If the members of the assembly or its presiding officer want a discussion to precede the vote of confidence, what is wrong with it? Considering that it is a hung assembly, and that some members may be unsure of whom to support for the formation of the Government, a free debate in the House, begun by the speeches of rival candidates, could have made a meaningful contribution to the decision of the MLAs. The vote of confidence sought by Atal Behari Vapayee in 1996 was preceded by such a day-long debate in the Lok Sabha. Therefore, to deprive the Goa MLAs such a debate to precede the vote, was meaningless, and the Court had no explanation to offer, why it denied them the opportunity to debate the mandate and the vote on the floor of the house, before the floor-test.

As it happened, the Congress was not keen to have a debate in the House before the vote of confidence either. Had it been keen on a debate, it would have requested the Court to modify its order suitably.

Instead, it tried to debate the subject of mandate with the bench itself. Kavlekar’s counsel, Abhishek Manu Singhvi, tried to convince the bench that mandate is an essential facet of democracy, which is a basic feature of the Constitution, and therefore, as the mandate in the elections was against the BJP, the court could not permit the hijacking of the mandate by the BJP.

Attractive though the argument is, it failed to persuade the bench, which kept asking the petitioner, what prevented the Congress, from staking its claim, if it had the majority support in the assembly. It was essentially a political argument, which was given the legal colour by the bench. Show us the numbers, we will give the order suitably, the bench told Singhvi, oblivious of the fact that it was not for the bench or the Governor to decide who has the numbers.

Kavlekar’s senior counsel, Abhishek Manu Singhvi told the bench that his party waited for the invitation from the Governor for consultations, but was caught unawares by the unexpected invitation to the second largest party in the assembly, the BJP.

After all, between Parrikar’s appointment as the Chief Minister on March 12, and his swearing-in on 14th, there was no Government, and it would have hardly mattered, if that situation continued till March 16, when the floor-test was advanced under the directions of the Court.

It is incorrect to infer from the proceedings on March 14, as most Supreme Court correspondents have reported, that the Court ‘refused’ to stay the swearing-in of Parrikkar’s ministry. The court was not faced with a prayer for stay; therefore, its decline did not arise.

Had the Court quashed the Governor’s appointment of Parrikar as the Chief Minister, as prayed for by the petitioner, there would have been no need for a prayer for stay of the swearing-in. Therefore, a separate prayer for the stay of swearing-in of the new ministry did not make sense.

But it was obvious from the court proceedings that the Court advanced the date of vote of confidence, overruling the 15-days window granted by the Governor to Parrikar, to just two days, because it shared the concern of the petitioner that the Chief Minister might use the huge time gap between his appointment and the confidence vote to adopt unfair means to influence the voters.

Similar concern would have prevailed, if the respondents, the BJP and the Central Government explicitly sought the Court’s permission for the swearing-in ceremony. They didn’t and that explains the silence of the order on this issue.

It could be argued that offering posts of Ministers to the very MLAs, whose support to the BJP is contested, and swearing-in them as Ministers even before the confidence vote, cannot be called as unfair, as participation in the Government could be a legitimate negotiable issue between post-poll allies. But the Congress may have reasons to be aggrieved that this disturbed the level-playing field on the eve of the confidence vote.

Although the Court did not stay the swearing-in of the Ministry before the confidence vote, it is reasonable to suggest that had Parrikar refrained from it, it would have been appreciated by the Court. After all, Parrikar did not allot portfolios to the Ministers, before the vote. Therefore, it was not as if, these Ministers would have begun to focus on governance from day one.

The bench took note of the Congress’ demand for a composite floor-test on the lines of the precedents the Court itself set in Uttar Pradesh in 1998 and in Jharkhand in 2005. Although the Court didn’t agree to the party’s oral prayers in this regard, it did acknowledge its concern for ensuring free and fair vote of confidence, by directing the holding of floor-test as early as possible.

The bench’s concern to maintain a level-playing field on the eve of the confidence vote could be gleaned from another observation. It specifically sought from the petitioner and the respondents whether they could agree on the name of a Pro-tem Speaker to conduct the proceedings, to ensure smooth swearing-in of the new Members, and to complete the only agenda, the floor-test. Senior Counsel, Harish Salve, told the bench that the senior-most member would be chosen as the Pro-tem Speaker, to which Singhvi agreed.

But what happened was exactly the opposite: Siddharth Kukalienkar was chosen as the Pro-tem Speaker, even though the senior-most member in the assembly, belonging to the Congress, Pratapsingh Rane was available. Although the Supreme Court’s order does not record the undertaking of the respondents to choose the senior-most member as the Pro-tem Speaker, it was one issue on which there was agreement, but it was broken.

During the March 14 hearing, Singhvi kept referring to his contention that extending invitation to the largest single party was part of the Constitutional Convention, if there is no pre-election coalition, in the case of a hung electoral verdict. This was disputed by the bench, which argued that the convention would apply only if the single largest party had the requisite numbers to form the Government. The bench also suggested that if there is a post-poll coalition claiming the requisite majority strength in the assembly, it would be unreasonable to expect the Governor to invite the single largest party to form the Government.

The bench probably had in mind the 13-day Atal Behari Vajpayee Government, which could not muster majority support in the Lok Sabha in 1996, despite being a single-largest party, and therefore, fell, only to be replaced by a post-poll coalition, supported by the Congress from outside.

Indeed, the question whether the President or the Governor, should go on inviting leaders of political parties in the order of their strength in the House, in the event of hung electoral verdicts, has been a vexed one, to which there are no clear answers applicable to all the times. Perhaps the question of mandate has an answer to this dilemma. In 1996, would it have been appropriate for the Congress, to stake its claim to form the Government, despite having lost the mandate? Backing the United Front Government from outside, seemed the most expedient course then.

The question can be posed in a different manner. Had the Supreme Court been convinced on March 14 that the Congress did not have the numbers and that was why it did not deserve the invitation from the Governor to form the Government, why did it ask the Parrikar Government to go for the floor-test at the earliest?

The Supreme Court’s judgment in Bommai makes it clear that the floor-test is required only when the incumbent Government loses its majority due to rebellion or withdrawal of support; not otherwise.

The Court held so in Bommai because it was aware that for the immediate post-election situations, the Sarkaria Commission’s Report (1988) has prescribed the list of options in the order of preference to be taken by the Governor/President faced with hung verdicts. In this list, the option of considering post-poll coalition comes after the option of inviting a single largest party.

No doubt, the President or the Governor invariably asks the person invited to prove his or her majority on the floor of the house, even in the case of hung verdicts, in order to clear any possible uncertainty, but the order of preference to be followed as laid down in the Sarkaria report is sacrosanct.

Perhaps the order of preference of options was insisted by the Sarkaria Commission and reiterated by the Punchhi Commission in 2010, in order to protect the mandate, from being hijacked in the manner it has happened in Goa and Manipur.