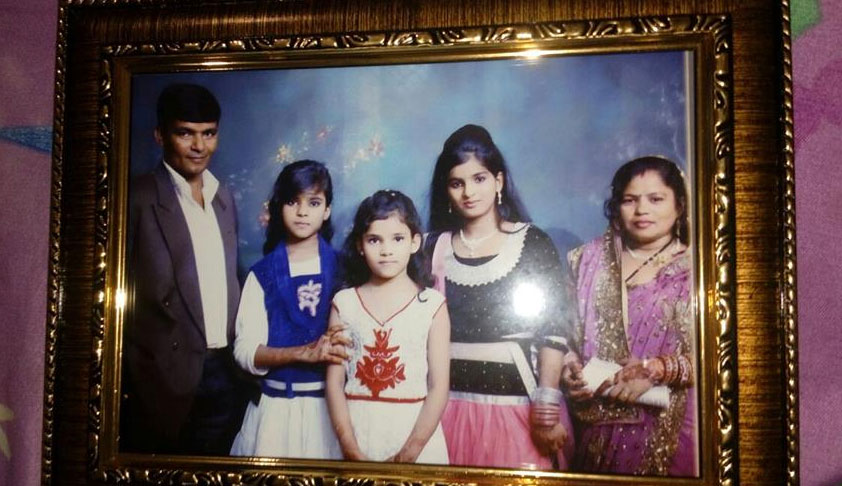 On September 13, acting on his PIL, Delhi High Court Acting Chief Justice Gita Mittal directed the government to “notify an effective policy” within three months to check the culturally-accepted menace of celebratory gunfire after considering the suggestions put forth by his advocate Akash Vajpai who borrows from a poster campaign against air firing in Macedonia to say, “Bullets are not greeting cards. Celebrate weddings without weapons”.

His 17-year-old daughter Anjali Kaushal, along with her two younger sisters, was standing in the balcony of their house in Pathar Bazaar, Mangolpuri Kalan in north-west Delhi enjoying the sight of marriage procession of their neighbour Aman.

Their mother had gone out briefly to the local market while Shyam was busy at his tea stall when a boy from their neighbourhood came racing to him saying Anjali has been hit by a cracker.

Anjali was rushed to the hospital where a CT-scan revealed that she was hit by a bullet. Two days later, Anjali passed away.

The police told Shyam somebody in the “baraat” fired in the air and the bullet hit Anjali.

A year after the unfortunate event, Shyam’s WhatsApp status gives away the void created in his life. The profile picture says, “Justice for Anjali Kaushal”.

While the police “prepared” an FIR naming a history-sheeter Vicky alias Vikrant as an accused in Anjali’s case, Shyam refuses to bow down to pressure tactics from the family in whose marriage procession the gun was fired in the air or from the police.

“It has been over a year but Anjali has been waiting for justice. We wrote to the NHRC, to the Prime Minister, the case was transferred to the Crime Branch but in vain,” he says.

All he is being told is to name “Vikrant” as the accused.

“Should I teach my daughters that lying will fetch them justice?” he asks rueful.

Sometime after the death of his daughter made news last year, advocate Akash Vajpai was moved and extended a helping hand to the family.

Late last year, while the police failed them, another incident of celebratory gunfire made news. This led them into moving a PIL in the high court.

“We are running from pillar to post for justice for our daughter. Only we can feel the pain. So, I along with advocate Akash, decided that no one else should suffer like us and approached the high court,” says Shyam.

Advocate Vajpai says the person having the licenced arms uses it in public gathering, religious places, marriage parties and likewise other functions where the licensee intends to show his authority and status in the guise of joy. This amounts to causing terror in general public.

“Right to life guaranteed under Article 21 of the Constitution of India, includes the right to live with dignity. Dignity would stand compromised if one is not allowed to live a terror-free life,” he says.

In the PIL, he has suggested several measures which the State can take to check what he calls “civilian militia”.

“Therefore, escalation of this trend has to be arrested,” he says.

It is to be noted that in July, the Delhi High Court, while dismissing a petition for arms licence, had said, “Possession of arms today has become a status symbol. Individuals seek to possess arms mostly for the purposes of showing off that they are influential people. Arms are even being used indiscriminately for celebrity firing at marriages etc.”

The Allahabad High Court, in Rajiv Kumar vs State of UP & amp; Others (2011 (88) ALR 140), held that a gun/arms licence, issued to a person for personal security/safety, cannot/could not be used during wedding ceremony/procession or for other ceremonial affairs.

Some Of The Suggested Measures


Some Incidents Of Celebratory Firing

May 31, 2010: A 40-year- old electronics appliances shop owner was shot dead in a celebratory firing at a marriage ceremony in west Delhi.

June 30, 2010: A 12-year- old boy was injured during firing at a marriage ceremony in Shahabad village in Outer Delhi when some people started firing in the air when a marriage procession arrived at the village from Jhajjar, Haryana.

December 17, 2011: Shivam, a class-V student was hit in the neck by a bullet when some members of a marriage party fired 25 rounds in air in an inebriated state at Jafarpur Kalan in west Delhi. He was declared brought dead when rushed to the hospital.

November 26, 2012:  A 12-year- old girl was accidentally shot at when her cousin started celebratory firing from his uncle’s pistol. They both were attending their cousin’s wedding at Mundka.

Read the Petition and Rejoinder Here