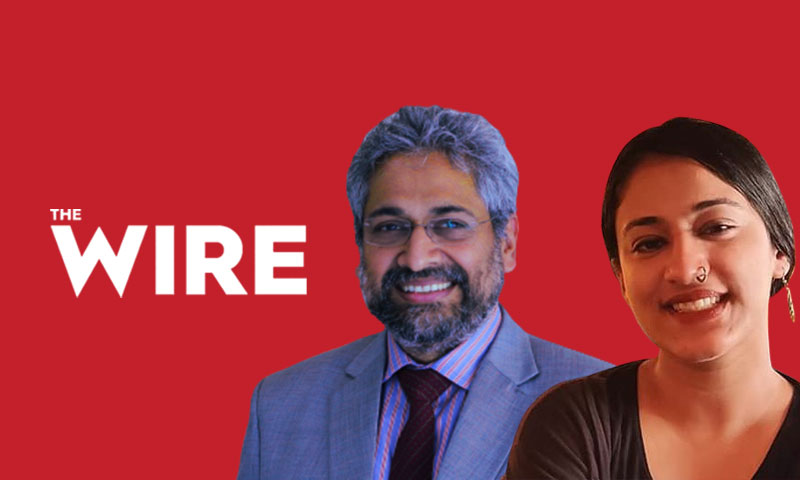 The Allahabad High Court has quashed the FIR registered against The Wire's founding editor Siddharth Varadarajan and reporter Ismat Ara in Rampur over a report on the death of a protester in New Delhi during the farmers protest on Republic Day 2021.The FIR was lodged under IPC sections 153B (imputations, assertions prejudicial to national integration) and 505(2) (statements creating or...

The Allahabad High Court has quashed the FIR registered against The Wire's founding editor Siddharth Varadarajan and reporter Ismat Ara in Rampur over a report on the death of a protester in New Delhi during the farmers protest on Republic Day 2021.

The FIR was lodged under IPC sections 153B (imputations, assertions prejudicial to national integration) and 505(2) (statements creating or promoting enmity between classes) for tweets of the report on Navreet Singh Dibdibiya (farm law protestor who died during the protest in Delhi) and alleging that they misled the public.

The Court noted that the report was giving the version of the family of the victim that he had died of bullet injuries. The Rampur police lodged the FIR alleging that the petitioners by publication of the report and the tweets sought to "provocate the masses, spread riot, tarnish the image of medical officers by proving wrong to the panel of Medical Officers".

"Perusal of the publication made by the petitioners indicate that it mentions the fact of incident,thereafter the statement of the family members regarding incident and alleged information given by the doctors, denial of the U.P. Police and the fact as to what happened that day. This publication was made on 30.01.2021 at 10.08 A.M. and on the very same day a clarification of the three doctors was issued by Rampur Police at 04:39 PM, immediately thereafter at 04:46 PM, the same was also published by the petitioners.

Nothing was also brought before this court to indicate that there was any disturbance or riot which may have any bearing on public disorder on account of the publication of news/ tweet of the petitioners."

Reliance is placed on Supreme Court's decision in Patricia Mukhim Vs. State of Meghalaya and Others; 2021 SCC Online SC 258, where it was held that only where the written or spoken words have the tendency of creating public disorder or disturbance of law and order or affecting public tranquillity, the law needs to step in to prevent such an activity.

The Bench stated that for constituting an offence against a person under Section 153-B IPC there should be words either spoken or written or signs or visible representations by a person on account of which any class of persons can not by reason of their being members of any religious, racial, language or regional group or caste or community, bear true faith and allegiance to the constitution of India or uphold the sovereignty and integrity of India or on account of various factors mentioned therein be denied or deprived of their rights as citizens of India or such assertion, counsel, plea or appeal causes or likely to cause disharmony or feelings of enmity or hatred or ill will between such members and other persons

Similarly, for constituting an offence under Section 505 (2) IPC, it refers to a person making, publishing or circulating any statement or report containing rumour or alarming news. Thereafter, it refers to the intent of the person which should be to create or promote and then refers to the harm-based element, that is, likely to create or promote on the ground of religion, race, place of birth, residence, language, cast, etc., feeling of enmity, hatred or ill-will between different religions, racial language, religious groups or castes or communities, etc.
"Unless the aforesaid ingredients are fulfilled the offences under sections 153-B and 505 (2) can not be made out," it said.

In the story (written by Ismat Ara) tweeted by the petitioners, it was claimed that the grandfather of the protestor, Hardeep Singh Dibdibiya had said that he was told by one of the doctors from the panel of doctors who conducted the post-mortem that the youth had died due to a bullet injury and since his (doctor's) hands were tied, he could not do anything.

However, later on, the Rampur police had tweeted a statement saying that the doctors involved in Navreet Singh's post-mortem had denied the fact that they had spoken "to the media or any other person" or had provided any such information as is being attributed to them in the media.

Further, an FIR was registered on the complaint of a Rampur resident, Sanju Turaiha. In his complaint, he had claimed that The Wire quoted the doctor to mislead people and this article had led to anger among the common people in Rampur and had given rise to tension.

It may be noted that the Supreme Court had, in September 2021, asked 'The Wire' and three of its reporters to approach the High Court for quashing the FIR registered against them over news reports published/written by them (including the instant article tweeted by Siddharth Varadarajan and Ara).

It may be noted that Allahabad High Court, while granting them the protection from coercive action, also took into account the September 8, 2021 order of the Supreme Court in which two months of protection was granted to the "The Wire" and three of its reporters from three FIRs registered against them by the Uttar Pradesh Police over some of the reports published by the portal.

However, the Supreme Court said that entertaining the matter directly will open a "Pandora's Box" and asked them to approach the High Court for quashing the FIRs.

Case title - Siddharth Varadarajan And Another v. State Of U.P. And 2 Others