'Animals Are Sources Of Livelihood, You Can't Take Them Away, Either You Change It Or We Will Stay' : CJI On 2017 Cattle Protection Rules 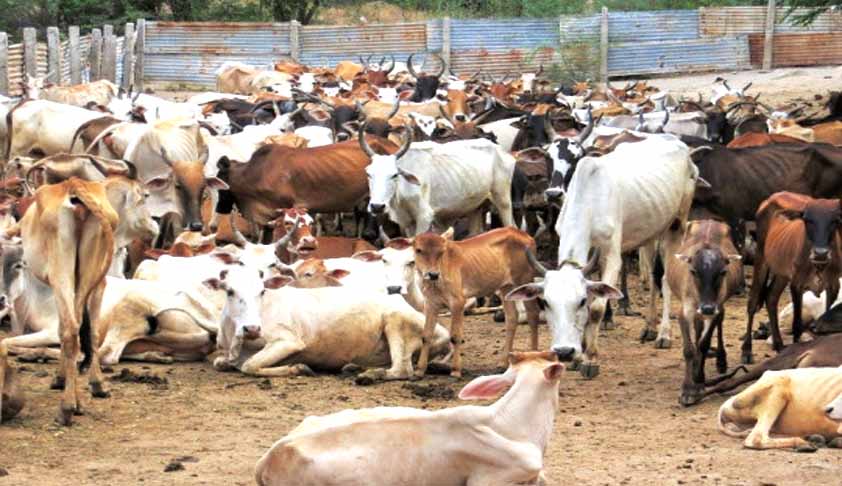 "Either you change it or we will stay it", noted CJI Bobde while considering a plea challenging the validity of 2017 Rules under Prevention of Cruelty to Animals Act, which allow authorities to seize vehicles used in cattle transportation and send the animals to gaushalas or cow shelters.A Bench headed by Chief Justice of India SA Bobde heard the matter and directed the Centre to...

"Either you change it or we will stay it", noted CJI Bobde while considering a plea challenging the validity of 2017 Rules under Prevention of Cruelty to Animals Act, which allow authorities to seize vehicles used in cattle transportation and send the animals to gaushalas or cow shelters.

A Bench headed by Chief Justice of India SA Bobde heard the matter and directed the Centre to consider withdrawal of the Rules within a week. ASG Jayant Sood submitted to the Bench that he would seek instructions and file a short Affidavit by next Monday.

In today's hearing, Senior Advocate Sanjay Hegde, appearing for the Petitioner, informed the Court that on the last hearing on 17th August, 2020, ASG Sood was supposed to inform the Court about the position of the Rules.

Sood then submitted to the Court that the Rules had already been notified. To this, CJI Bobde stated, "Animals, not cats and dogs, are a source of livelihood. You cannot take this away, and it is also against Section 29 of the Act. Your Rules are contradictory. You either change it or stay it".

Sood attempted to inform the Court that the there had been increasing instances of torture against animals, and accordingly, the Rules had been notified.

CJI Bobde responded that the Supreme Court could not "countenance a situation where the Rules are running contradiction to the objective of the Act".

In light of the above, Sood sought for time to seek instructions and to file a short Affidavit on the issue.

The matter will now be taken up next Monday.

The plea, filed by Buffalo Traders Welfare Association, states that the provisions of the Prevention of Cruelty to Animals (Care and Maintenance of Case Property Animals) Rules, 2017, and the Prevention of Cruelty to Animals (Regulation of Livestock Markets) Rules, 2017, were notified by the Ministry of Environment, Forest and Climate Change, on May 23, 2017, and are unconstitutional in nature.

It has further been stated that, while running contradictory to the Act itself, the Rules result in "frequent looting of the animals in violation of the Rule of Law. Certain groups get emboldened to take the law into their own hands. Moreover, these incidents are acting as triggers for communal polarization of society, and if not halted effectively and immediately, those will have disastrous consequences on the social fabric of the country".
In 2017, the Centre had told the Court that it was considering the withdrawal of these rules.
"It is also the contention of the Union of India, that a large number of representations depicting the allegedly unworkable and unacceptable provisions of the Rules have been received, and anumber of writ petitions have been filed in different High Courts,besides those which have been filed before this Court. It is pointed out, that the issues of challenge raised in the representations and writ petitions are the subject matter of afresh consideration by the Government of India. It is pointed out,that the Ministry of Environment and Forests, is presently seized of the matter, and after an appropriate determination, changes ifany, as may be considered appropriate will be introduced afterwhich the amended Rules, shall be re-notified. We record the abovestatement made to this Court on behalf of the Government of India", a bench headed by the then CJI had recorded in the order.
Observing thus, the bench had then disposed of a bunch of pleas challenging the rules observing that the stay orders passed by the High Courts are applicable throughout the country.
Subsequently, on August 11, 2017, the Supreme Court clarified the above order to state that the stay was limited only to the Livestock Rules and vacated the stay in relation to the Care and Maintenance of Case Property Animals Rules.
"Having heard learned counsel for the rival parties weare satisfied, that the directions passed by this Court on11.7.017 should be limited to Rules 22(b)(iii), 22(d)(ii) &(v) and 22(e)(i) & (iii) of the Prevention of Cruelty toAnimals (Regulation of Livestock Markets) Rules, 2017.Ordered accordingly.
We are also satisfied, that the direction containedwith reference to the Prevention of Cruelty to Animals(Care and Maintenance of Case Property Animals) Rules,2017, deserves to be vacated. Ordered accordingly", the SC ordered.