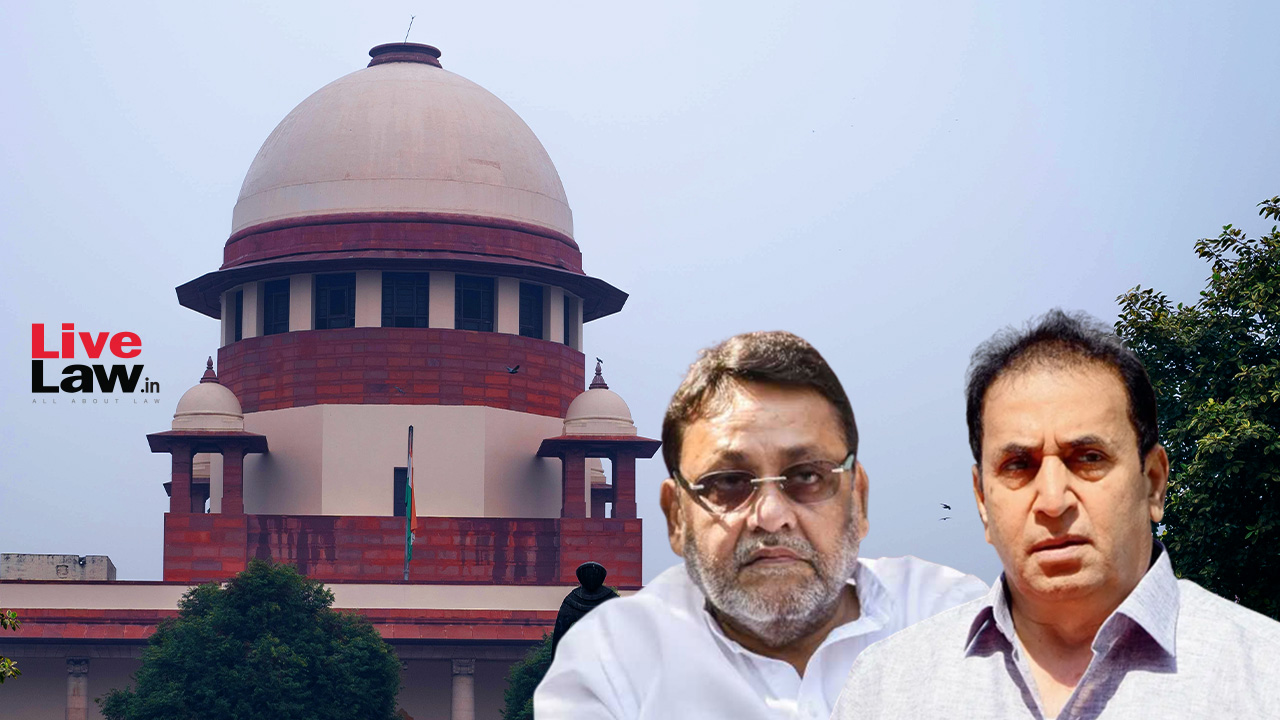 The Supreme Court on Monday refused to allow the temporary release of Maharashtra MLAs Nawab Malik and Anil Deshmukh from the prison for casting vote in the Maharashtra Legislative Council elections, which is going on today.

A vacation bench comprising Justices CT Ravikumar and Sudhanshu Dhulia refused to grant interim relief in the Special Leave Petition filed by the legislators against the order passed by the Bombay High Court on June 17 refusing to grant them temporary release for casting vote in MLC polls.

However, the bench agreed to examine the issue relating to the interpretation of Section 62(5) of the Representation of the People Act 1951, which bars a prisoner from voting.

The bench refused interim relief taking note of the fact that constitutional validity of Section 62(5) was upheld by the Supreme Court in the Anukul Chandra Pradhan(1997) case and S Radhakrishnan cases.

While Malik is the Minority Development Minister, Deshmukh is the former Home Minister of Maharashtra. Both members of the Nationalist Congress Party are lodged in a prison in Mumbai in two separate cases under the Prevention of Money Laundering Act.

The High Court cited the bar under Section 62(5) of the Representation of the People Act 1955 against allowing prisoners to vote and said that the bar is applicable to undertrials as well.

"If a full play is given to the provisions contained in section 2(d) and Section 62(5) of the RP Act 1951, an inference becomes inescapable that a person in custody, either post conviction or during the course of investigation or trial, is prohibited from casting vote in any election", a single bench of Justice NJ Jamadar held.

Further, the High Court observed that permitting a person in prison to vote, who is otherwise barred from voting, wouldn't strengthen democracy.

Hearing before the Supreme Court

Senior Advocate Meenakshi Arora, appearing for the petitioners, submitted before the vacation bench that they are seeking to exercise their rights in the capacity of the representatives of their constituencies to cast their votes to the legislative council.

"By closing my right to vote, what is deprived is the right of the all constituency to cast their vote in the council", she submitted. In this regard, reference was made to Article 171 of the Constitution which deals with the

She referred to the PUCL judgment to state that right to vote is recognized as a constitutional right. Reference was made to the Supreme Court's order in MP Mohammad Shahabuddin's case, in which he was granted release from prison to vote in the election of Vice President.

The bench said that the only exception to Section 62(5) is preventive detention. As regards the order in Shahabuddin case, the bench said it was stated in the order that it was being passed in the special facts and circumstances relating to Vice President election.

"Regarding the entitlement of vote, the question is whether you are in prison or not. If you are in prison, in connection with Preventive Detention, there's no bar at all but this is falling under Money Laundering which doesn't fall into exception. Prima facie Section 62(5) applies", Justice CT Ravikumar observed.

"No person shall vote at any election...", Justice Ravikumar read out Section 62(5) emphasizing on "no person" and "any election". The judge observed that the status of the person or the type of election is immaterial for the bar under Section 62(5) and the only relevant consideration was whether the person is confined in a prison.

"It is something which is harsh..but law is harsh, what to do?", Justice Dhulia added.

"Law is the only thing we can look at", Justice Ravikumar said.

"Tomorrow you may say that release me because my constituency is not being represented on the floor", Justice Ravikumar observed.

The bench also said that to consider the issue of bail, the twin-conditions under Section 45 of the Prevention of Money Laundering Act will also have to be considered.

Arora also referred to the recent Supreme Court judgment in Ashish Shelar case in which the suspension of MLAs for over one year from the legislative assembly was set aside on the ground that it will amount to a punishment on the constituency as well, which goes unrepresented.

The bench said that Ashish Shelar case was in the context of suspension from the house and not applicable to a situation where a legislator is imprisoned in a criminal case.

Solicitor General of India Tushar Mehta submitted that the word "election" has been defined under Section 2(d) of the RP Act as election to both houses. Therefore, the election to the Legislative Council is also coming under the purview of Section 62(5). The SG further submitted that elections to the office of Vice President is not covered under the RP Act and hence the order in Shahabuddin case is not applicable in the instant case.

The SG informed the bench that the constitutional validity of Section 62(5) RP Act was upheld by the Supreme Court in Anukul Chandra Pradhan case.

At this juncture, the bench made a prima facie observation that this provision might be "slightly undemocratic".

"A prisoner has the right to get voted, but he cannot vote. We have not made up our mind, but we feel that this provision is..slightly undemocratic", Justice Dhulia observed.

The SG pointed out that the petitioners have not challenged the constitutionality of Section 62(5) and that the validity of the provision is not an issue in the present case.

Arora submitted that the interpretation of the provision has to be revisited in the context of indirect elections to Rajya Sabha or Legislative Councils. She said that some "line has to be drawn" when the rights of the constituency are also involved.