Office of Attorney General is a public authority under the Right to Information Act: Delhi HC [Read the Judgment] 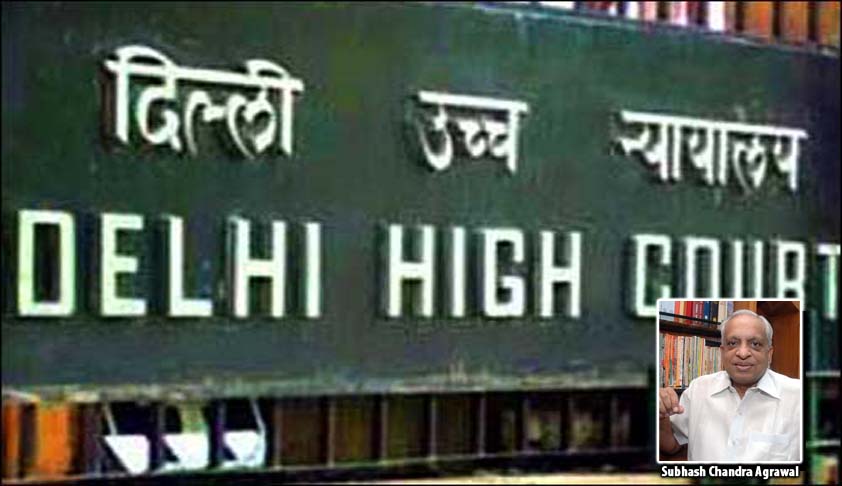 The Delhi High Court today pronounced that the office of the Attorney General of India is a public authority under the Right to Information Act. The Court decided the same while hearing a writ petition filed by RTI Activist Mr. Subhash Chandra Agrawal, which was against the order passed by full bench of CIC wherein the Central Information Commission had held that the office of Attorney...

The Delhi High Court today pronounced that the office of the Attorney General of India is a public authority under the Right to Information Act. The Court decided the same while hearing a writ petition filed by RTI Activist Mr. Subhash Chandra Agrawal, which was against the order passed by full bench of CIC wherein the Central Information Commission had held that the office of Attorney General was not a public authority under the RTI Act.

Before the High Court, it was contended by the Mr. Agrawal, "office of the AGI is established by virtue of Article 76 of the Constitution of India and, therefore, AGI would be answerable to the people of India." The petitioners also submitted, "The right to information is a fundamental right under Article 19(1) (a) of the Constitution of India and, therefore, the RTI Act must be interpreted in furtherance of the said fundamental right."

On the other hand, counsels appearing for office of the Attorney General submitted, "the AGI does not have the necessary infrastructure to support the applicability of the RTI Act inasmuch as, the AGI is a single person office and, therefore, would have to act as a CPIO as well as the Appellate Authority. Since the same is not feasible, the AGIcannot be held as 'Public Authority."

However, the arguments made by the office of the Attorney General failed to find favour with the Court and Justice VibhuBhakru in his judgment said, "The expression "authority" would also include all persons or bodies that have been conferred a power to perform the functions entrusted to them. Merely because the bulk of the duties of the AGI are advisory, the same would not render the office of the AGI any less authoritative than other constitutional functionaries. There are various bodies, which are entrusted with 'staff functions' (i.e. which are advisory in nature) as distinct from 'line functions'. The expression "authority" as used in Section 2(h) cannot be read as a term to exclude bodies or entities which are, essentially, performing advisory functions." The judgment also notes, "The expression "authority" as used in Section 2(h) of the Act would encompass any office that is conferred with any statutory or constitutional power. The office of the AGI is an office established under the Constitution of India; the incumbent appointed to that office discharges functions as provided under the Constitution. Article 76(2) of the Constitution expressly provides that the AGI would perform the duties of a legal character and also discharge the functions conferred on him under the Constitution or any other law in force. Indisputably, the appointee to that office is, by virtue the constitution, vested with the authority to discharge those functions."

The Court also negated the reliance placed by office of the Attorney General on certain cases by observing, "The decisions of the Supreme Court in Sukhdev Singh and Som Prakash Rekhi are rendered under Article 12 of the Constitution of India and it may not be apposite to apply them for interpreting Section 2(h) of the RTI Act."

Regarding the administrative difficulties the office of the Attorney General may face, the Court observed, "It has been contended that there would be a practical difficulty as the office of the Attorney General is only a skeletal office which only consists of the appointee and the appointee's is personal staff. In my view, this cannot be considered as a reason for excluding the applicability of the Act on a public authority."

Accordingly, the Court directed the office of the AGI to reconsider the application filed by Shri R.K. Jain, who was another petitioner in the matter.

Reacting to the judgment, Mr. Subash Chandra Agrawal told, It is significant that most of the CIC-verdicts deciding certain bodies as public-authorities under RTI Act are challenged at High Courts and/or Supreme Court most of which are because of indirect funding through land-allotment, public-private-partnerships, multi-state-cooperative-societies (MSCS) etc. Lot of public-interest is involved in such bodies which require these to be transparent and accountable also because of massive irregularities, corruption, scams, scandals etc involved in such bodies. Union government in larger public interest should bring all such bodies under RTI Act through amendment in legislation. Several sectors like banking, telecommunication etc are dominated now-a-days by private sector victimising their consumers through wrong doings. It is time that in interest of consumers at large, private sector above some specified turn-over may also be brought under RTI Act.

Since political parties which also happen to be law-makers are playing role of being law-breakers by continuously defying full-bench CIC-verdict dated 03.06.2013, all indirect government-funding like allotment of land and bungalows at highly subsidised rates, Income-tax-exemptions, free timings of All India Radio and Doordarshan, free voter-lists etc should be abolished. Our political parties are rich enough to afford all such facilities presently being unnecessarily provided by the government at cost of public-exchequer. Utilisation of all such government-resources and generation of extra revenue by stopping all such indirect government-funding to political parties will be used for national development and public welfare which is much more important than providing facilities to self-affording political parties.

You may read more of our coverage regarding efforts of Mr. Subhash Chandra Agrawal regarding Right to Information here.