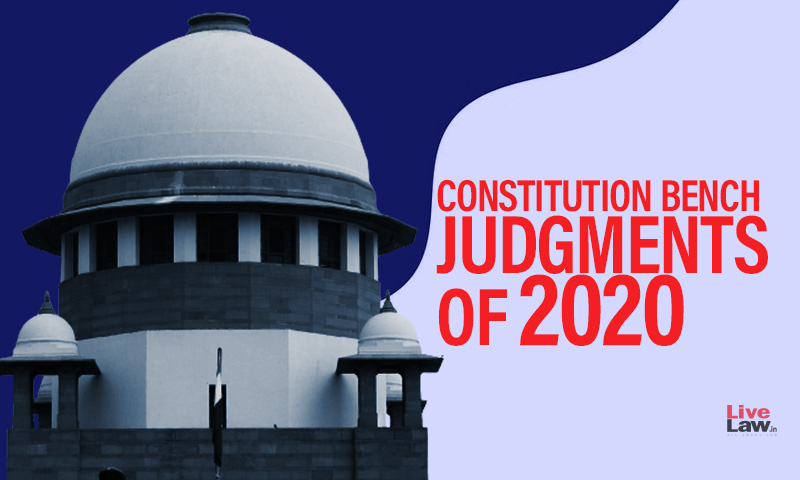 There were 11 Constitution Bench judgments/orders of the Supreme Court in 2020. Due to the advent of Covid-19 pandemic, many of the hearings took place through video conferencing mode.

[Sushila Aggarwal And Others V/S State (NCT Of Delhi)]

The Supreme Court held that anticipatory bail should not invariably be limited to a fixed period. But if there are any special or peculiar features necessitating the court to limit the tenure of anticipatory bail, it is open for it to do so, the five judge bench headed by Justice Arun Mishra has held. The Court also held that life or duration of an anticipatory bail order does not end normally at the time and stage when the accused is summoned by the court, or when charges are framed, but can continue till the end of the trial except in special and peculiar cases.

Justices MR Shah and Justice S. Ravindra Bhat penned separate judgments agreeing with each other. Justices Arun Mishra, Indira Banerjee and Vineet Saran concurred with the conclusion reached by both the judges. The judges said that the judgment in Shri Gurbaksh Singh Sibbia and others v. State of Punjab 1980 (2) SCC 565 needs reiteration. It overruled the judgment in Salauddin Abdulsamad Shaikh v. State of Maharashtra 1996 (1) SCC 667 which restricted the scope of Section 438 of the Cr.PC. It also overruled Siddharam Satlingappa Mhetre v. State of Maharashtra & Ors. 2011 (1) SCC 694, to the extent it held that no conditions can be imposed while granting an order of anticipatory bail, is incorrect.

Land Acquisition : No Lapse Of Proceedings Under Old Act If Compensation Is Deposited In Treasury

The Supreme Court held that proceedings under the Land Acquisition Act 1894 will not lapse if the compensation has been tendered by deposit in treasury. The Court held that land owners cannot insist that the amount should be deposited in Court so as to sustain the land acquisition proceedings under the old Act on the commencement of the new land acquisition law with effect from January 1, 2014.

The bench affirmed the view in the 2018 Indore Development Authority case, overruling the 2014 judgment in Pune Municipal Corporation case. A bench comprising Justices Arun Mishra, Indira Banerjee, Vineet Saran, M R Shah and Ravindra Bhat had heard the matter. The case involved the interpretation of Section 24(2) of the Right to Fair Compensation and Transparency in Land Acquisition, Rehabilitation and Resettlement Act 2013. As per this provision, compensation proceedings under the Land Acquisition Act 1894 will lapse on the commencement of the 2013 Act, if "compensation has not been paid".

In Mohanlal, it was held by a three judge bench that the trial of cases under NDPS Act will be vitiated if the informant and the investigating officer is the same person. "It is therefore held that a fair investigation, which is but the very foundation of fair trial, necessarily postulates that the informant and the investigator must not be the same person. Justice must not only be done, but must appear to be done also. Any possibility of bias or a predetermined conclusion has to be excluded. This requirement is all the more imperative in laws carrying a reverse burden of proof.", it was held in the said judgment.

Medical Council Of India Has No Power To Make Any Reservation For In-Service Candidates; States Have

[Dr. Shah Faesal and Ors. Vs. Union of India (UOI) ]
A five judge bench held that there was no need to refer to larger bench the petitions challenging the Presidential Orders issued under Article 370 on August 5 and 6 to repeal the special status of Jammu and Kashmir. This issue was considered by the Court in view of the contention that there was a conflict in the judgments between the judgments delivered by 5-judge benches in the cases of Prem Nath Kaul v. The State of Jammu and Kashmir [1959 AIR 749] and Sampat Prakash v. State of Jammu and Kashmir [1970 AIR 1118]. ""The Constitution Bench in the Prem Nath Kaul case (supra) did not discuss the continuation or cessation of the operation of Article 370 of the Constitution after the dissolution of the Constituent Assembly of the State. This was not an issue in question before the Court, unlike in the Sampat Prakash case (supra) where the contention was specifically made before, and refuted by, the Court. This Court sees no reason to read into the Prem Nath Kaul case (supra) an interpretation which results in it being in conflict with the subsequent judgments of this Court, particularly when an ordinary reading of the judgment does not result in such an interpretation", the bench comprising Justices N V Ramana, S K Kaul, Subhash Reddy, B R Gavai and Surya Kant held.

A Constitution bench comprising Justices Arun Mishra, Indira Banerjee, Vineet Saran, M.R. Shah and Aniruddha Bose held that 100 per cent reservation of teachers belonging to the Scheduled Tribe category at schools situated in "Scheduled Ares" is constitutionally invalid. The Bench also quashed the Government order issued under the hand of Governor of State of Andhra Pradesh which had affirmed absolute reservation for ST teachers and imposed costs on both Andhra Pradesh & Telangana Government's, seeking reasons from the Government's for breaching the 50% ceiling in reservations.

[ State of Punjab vs Davinder Singh ]

A five-judge bench of the Supreme Court on Thursday held that the decision of a coordinate bench in E V Chinnaiah vs State of Andhra Pradesh requires to be revisited and referred the matter to the Chief Justice for placing it before an appropriate larger bench. The bench expressed the view that once a State Government has the power to make reservation, it also has the power to make sub-classifications and that such sub-classification will not amount to tinkering with the reservation list. A bench comprising Justices Arun Mishra, Indira Banerjee, Vineet Saran, M R Shah and Aniruddha Bose delivered the verdict in the case State of Punjab vs Davinder Singh and others and connected cases.

Sabarimala: Questions Of Law Can Be Referred To Larger Bench In A Review Petition

A 9 judge bench headed by CJI SA Bobde dismissed the objections regarding the maintainability of reference in Sabarimala Review Petitions. On that occasion, the bench had stated that it will give reasons for the conclusion later. In May, the bench passed an order detailing the reasons for holding that it can refer questions of law to a larger bench in a review petition. The Court held as follows: (1) Limitations in Order XLVII of the Supreme Court Rules are not applicable to Orders/Judgments in Writ Petitions; (2) Reference can be made in a pending Review Petition; (3) No matter is beyond Jurisdiction of Superior Court of Record; (4) Article 142 justifies the Reference; (5) Not necessary to refer to facts to decide pure questions of law; (6) Article 145(3) Proviso that reference to a larger bench can be made only in Appeals and not in any other proceedings is not applicable to references made by a bench of five or more Judges.

Earlier, on November 14, 2019, a 5-judge bench headed by the then CJI Ranjan Gogoi observed by 3:2 majority that certain issues in the Sabarimala review were common to the pending cases concerning women entry in Mosques, validity of the practice of Female Genital Mutilation among Dawoodi Bohra community and the right of Parsi women who had married outside community to enter Fire Temples. On that count, the majority decided to keep the review petitions in Sabarimala matter pending until a larger bench determined questions related to essential religious practices.

State & Centre Have Concurrent Power To Fix Sugarcane Prices; No Conflict If State's Price Is Higher Than Centre's 'Minimum Price'