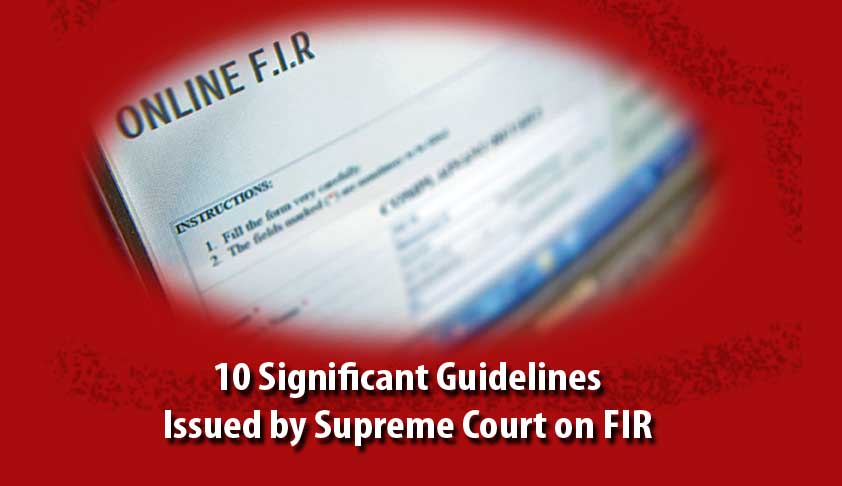 The Supreme Court of India Today in Youth Bar Association of India Vs Union of India and Others has issued 10 important Guidelines on First Information Report.The Bench comprising of Justices Dipak Misra and C.Nagappan has issued the following Guidelines(a) An accused is entitled to get a copy of the First Information Report at an earlier stage than as prescribed under Section 207 of...

The Supreme Court of India Today in Youth Bar Association of India Vs Union of India and Others has issued 10 important Guidelines on First Information Report.

The Bench comprising of Justices Dipak Misra and C.Nagappan has issued the following Guidelines

(a) An accused is entitled to get a copy of the First Information Report at an earlier stage than as prescribed under Section 207 of the Cr.P.C.

(b) An accused who has reasons to suspect that he has been roped in a criminal case and his name may be finding place in a First Information Report can submit an application through his representative/agent/parokar for grant of a certified copy before the concerned police officer or to the Superintendent of Police on payment of such fee which is payable for obtaining such a copy from the Court. On such application being made, the copy shall be supplied within twenty-four hours.

(c) Once the First Information Report is forwarded by the police station to the concerned Magistrate or any Special Judge, on an application being filed for certified copy on behalf of the accused, the same shall be given by the Court concerned within two working days. The aforesaid direction has nothing to do with the statutory mandate inhered under Section 207 of the Cr.P.C.

(d) The copies of the FIRs, unless the offence is sensitive in nature, like sexual offences, offences pertaining to insurgency, terrorism and of that category, offences under POCSO Act and such other offences, should be uploaded on the police website, and if there is no such website, on the official website of the State Government, within twenty-four hours of the registration of the First Information Report so that the accused or any person connected with the same can download the FIR and file appropriate application before the Court as per law for redressal of his grievances. It may be clarified here that in case there is connectivity problems due to geographical location or there is some other unavoidable difficulty, the time can be extended up to forty-eight hours. The said 48 hours can be extended maximum up to 72 hours and it is only relatable to connectivity problems due to geographical location.

(e) The decision not to upload the copy of the FIR on the website shall not be taken by an officer below the rank of Deputy Superintendent of Police or any person holding equivalent post. In case, the States where District Magistrate has a role, he may also assume the said authority. A decision taken by the concerned police officer or the District Magistrate shall be duly communicated to the concerned jurisdictional Magistrate.

(f) The word 'sensitive' apart from the other aspects which may be thought of being sensitive by the competent authority as stated hereinbefore would also include concept of privacy regard being had to the nature of the FIR. The examples given with regard to the sensitive cases are absolutely illustrative and are not exhaustive.

(g) If an FIR is not uploaded, needless to say, it shall not enure per se a ground to obtain the benefit under Section 438 of the Cr.P.C.

(h) In case a copy of the FIR is not provided on the ground of sensitive nature of the case, a person grieved by the said action, after disclosing his identity, can submit a representation to the Superintendent of Police or any person holding the equivalent post in the State. The Superintendent of Police shall constitute a committee of three officers which shall deal with the said grievance. As far as the Metropolitan cities are concerned, where Commissioner is there, if a representation is submitted to the Commissioner of Police who shall constitute a committee of three officers. The committee so constituted shall deal with the grievance within three days from the date of receipt of the representation and communicate it to the grieved person.

(i) The competent authority referred to hereinabove shall constitute the committee, as directed herein-above, within eight weeks from today.

(j) In cases wherein decisions have been taken not to give copies of the FIR regard being had to the sensitive nature of the case, it will be open to the accused/his authorized representative/parokar to file an application for grant of certified copy before the Court to which the FIR has been sent and the same shall be provided in quite promptitude by the concerned Court not beyond three days of the submission of the application.

(k) The directions for uploading of FIR in the website of all the States shall be given effect from 15th November, 2016.