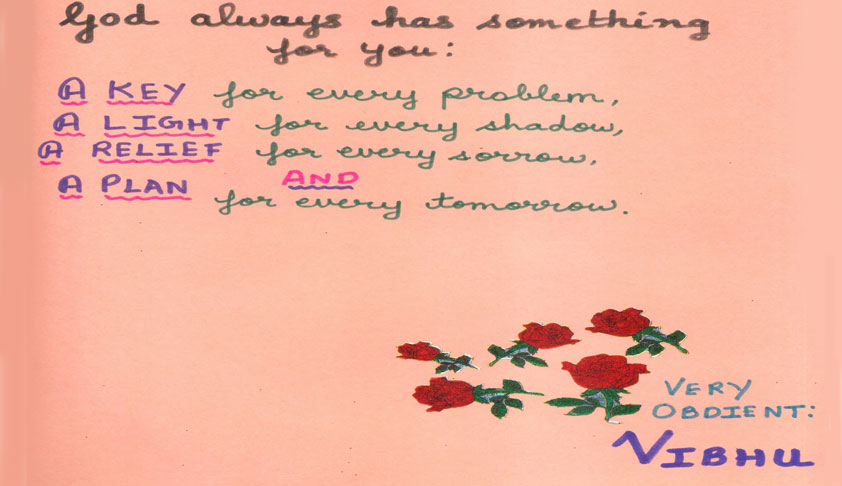 A ten-year-old boy recently rushed towards the Supreme Court bench of Justice Kurian Joseph and Justice Mohan M Shantanagoudar while they were disposing of an appeal related to a matrimonial dispute.The boy was one of the children of the couple who were on the two sides of matrimonial litigation. As the mediation attempts failed, the bench was ordering the dissolution of marriage between...

A ten-year-old boy recently rushed towards the Supreme Court bench of Justice Kurian Joseph and Justice Mohan M Shantanagoudar while they were disposing of an appeal related to a matrimonial dispute.

The boy was one of the children of the couple who were on the two sides of matrimonial litigation. As the mediation attempts failed, the bench was ordering the dissolution of marriage between the couple.

The boy then handed over to the Bench a handmade note which reads: “God always has something for you: A KEY for every problem, A LIGHT for every shadow, A RELIEF for every sorrow and A PLAN for every tomorrow.”

Surprised with the gesture, the order delivered by the Judges records, "This is the rich encomium paid to the Court by Master Vibhu, the ten-year-old son of the appellant and respondent. The little one present in Court today is exuberantly happy and sought liberty to present a handmade card expressing his joy on the settlement of all the disputes and litigations between his mother and father."

While the couple tied the knot in May,1997, they have been living separately since March, 2011, with a total of 23 cases pending between them in various courts. Noting that the parties had reached a settlement, the Court now quashed seven cases, dismissed six others and disposed of seven cases in view of the agreed terms between them.

It then went on to dissolve the marriage between them without making them wait for six months, which is the statutory cool off period, observing, "What survives is only the Application filed by the parties under Section 13B of the Hindu Marriage Act, 1955. As we have settled all disputes, we do not think it necessary to relegate them for another litigation before the Family Court. The parties are present before us. Having regard to the background of the litigation and having regard to the long separation between the parties, we are convinced that the parties have taken a conscious decision, uninfluenced by any extraneous factors. Therefore, it is not necessary for them to wait for a further period of six months."

The parties were further directed to strictly abide by the terms of settlement and restrained them from instituting any fresh litigation in respect of the subject matter without leave of the Apex Court.

Before parting with the judgment, the Court also emphasized on the duty cast on Courts to make an endeavour to guide the parties through a settlement, observing, "Under Section 9 of the Family Courts Act, 1984, the Court has a duty to make an endeavour to assist and persuade the parties in arriving at a settlement. Unlike many other legislations, the Legislature has cast a duty on the Court in that regard. The jurisdiction is not just to decide a dispute, on the contrary, the court also has to involve itself in the process of conciliation/mediation between the parties for assisting them not only to settle the disputes but also to secure speedy settlement of disputes. Such timely intervention of the court will not only resolve the disputes and settle the parties peacefully but also prevent sporadic litigations between the parties."