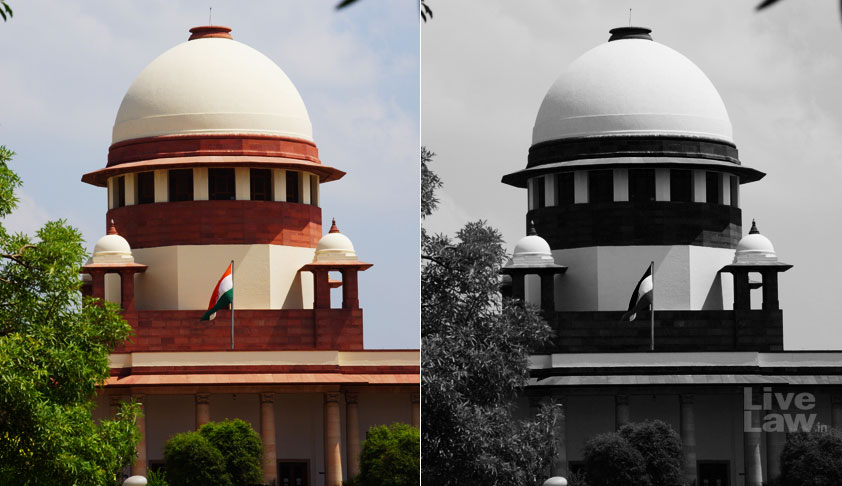 The events that unfolded in the Supreme Court of India on Friday, the 10th of November 2017, were unbecoming of it. While some would call it a ‘constitutional crisis’, it was in reality, a public display of loss of faith amongst brother Judges.The constitution of an extraordinary Constitution Bench took the lawyers by surprise as the proceedings were unprecedented in the history of...

The events that unfolded in the Supreme Court of India on Friday, the 10th of November 2017, were unbecoming of it. While some would call it a ‘constitutional crisis’, it was in reality, a public display of loss of faith amongst brother Judges.

The constitution of an extraordinary Constitution Bench took the lawyers by surprise as the proceedings were unprecedented in the history of the Supreme Court.

It was Friday, a miscellaneous day in the Supreme Court and most of the lawyers had left the Court by noon. Around 2.55pm, the lawyers and media personnel were surprised to hear about the sudden constitution of an extraordinary Constitution Bench scheduled at 3pm. The lawyers were in fact eagerly waiting for the Constitution Bench comprising of the first five senior Judges which was constituted and scheduled to sit on 13.11.2017, the coming Monday, as per the order of Chelameswar,J. and Abdul Nazeer,J.

“What was the urgency for such a sudden constitution of a new bench? What are the issues? Why such a Constitution Bench with different set of Judges, when a Bench comprising of five senior most Judges was already constituted, whether rightly or wrongly?  What if the same issue would be considered again by the forthcoming Constitution Bench on Monday?  If Justice Chelameswar’s order is improper, why couldn’t that issue also be considered by the Monday Bench?  Is there any disqualification for the Chief Justice to constitute the Bench?” were some of the questions that perplexed the lawyers.

It was later revealed that the office bearers of Supreme Court Bar Association (SCBA) and Advocate Prashant Bhushan, who are parties to the Writ Petition in matter, were informed as late as at 2:40 pm about the sitting of the Constitution Bench. A good 20 minutes before!

There also existed some confusion about the number of Judges on the extraordinary Constitution Bench. The first list released by the registry showed that it comprised of seven judges, including A.K Sikri,J. and Ashok Bhushan,J. who heard the same Petition in the forenoon as item 60 in Court no.6. Later, however, another communication came up, excluding the names of these two Judges While hearing the petition, Sikri,J. had given an impression that the matter would be tagged along with the case already posted before the Constitutional Bench scheduled on Monday. However, the order was to place the writ petition before the Chief Justice of India. The exact wordings of the order came to light when the CJI handed over a copy of Justice Sikri’s order to Mr. Bhushan during the course of the hearing.

Mr. Bhushan, who rushed to the Court on receiving the news of the new Bench, requested the Bench for time to respond. His request was however turned down.

Thus started the proceedings of the fastest ever constituted Constitutional Bench in the history of Supreme Court. Right from the start, any experienced lawyer could sense the mood of the Bench as if it had already decided to nullify the order rendered by Chelameswar,J. and S. Abdul Nazeer,J.

The CJI spent the initial few minutes explaining the orders that he had passed and directed the Additional Solicitor General P. S. Narasimha to read the orders passed in the Medical College matters. He then asked the ASG to point out the illegality in those orders. The CJI added that he had initiated in-house proceedings against one High Court judge regarding an order passed based on the letter of Advocate General.

The Chief Justice of India soon raised his tone much above the normal and challenged Mr. Bhushan to point out any corruption in the orders. In response Mr. Bhushan requested the CJI to recuse himself from hearing. The group voice of SCBA officers was heard saying “ No one can compel a judge to recuse himself.” Mr Bhushan told the CJI that an FIR is lodged against him. The Chief Justice of India then challenged Mr. Bhushan to show the FIR against him. Mr Bhushan began reading the FIR and the persons named therein.There was no mentioning of the CJI in it, but Mr.Bhushan began to explain. CJI told Mr Bhushan that he was liable for contempt to which Bhushan retorted that “This will bring disrepute to the institution”.

The Centre was duly represented by Additional Solicitor General Mr. P.S.Narasimha, revealing the position of the Union of India in this ‘constitutional crisis’. Though initially the ASG tried to persuade the Court to take contempt against the middlemen involved in bribery, he did not to persuade it further. Mr. P.S. Narasimha introduced an interesting legal proposition arguing that” Administrative power of Chief Justice of India should be treated as Constitutional power”. The ASG and the office bearers of the SCBA seemed well-prepared to argue, as if this was a regular pre-notified Constitution Bench. They were not short of judgments, precedents and provisions of the Supreme Court Rules. The CJI appeared to be enjoying the support that he was receiving from the SCBA office bearers.

Justice Arun Mishra referring to the FIR stated that, it cannot be presumed that it was against any Judge and “if someone presumes, Court can’t help it”. One senior SCBA member was loudly heard commenting ‘Chelameswar can’. The Court though heard the comment by a designated senior counsel representing SCBA naming the second senior most judge, sadly it ignored that comment at that moment.

At this juncture, Justice Arun Mishra defended the Chief Justice. He said “we are against corruption, your bar council should take action against such persons who are involved in corruption”. Arun Mishra,J. continued stating that Judges and other dignitaries cannot be placed under a Sub-inspector and that there are constitutional mechanisms to deal with such a situation. He said, “ We are in a constitutional crisis”.

One senior office bearer submitted that the order passed by Chelameswar,J. and S. Nazeer,J. amounted to forum shopping. The CJI then immediately sought a clarification for usage of the term 'forum shopping’. The lawyer duly explained stating that it would be ‘forum-shopping’ if the petitioners managed a listing before Chelameswar,J. When the office bearer started naming Chelameswar,J. multiple times, Arun Mishra,J. intervened and directed him to talk about the procedure and not the Judge.

In fact, the Constitution Bench leisurely heard several known and unknown lawyers who rose to support the Chief Justice's supremacy regarding the power to constitute the Benches in Supreme Court. The SCBA Secretary declared his blanket support with repeated assurance to the Court that the entire executive was strongly behind him.

Mr. Bhushan, many a time, rose to explain his side, he even complained for not being given a chance to respond. He was however interrupted on many occasions. Mr. Suri, the SCBA President, requested the Court to initiate contempt proceedings against Mr. Dave, Mr. Bhushan and Mrs. Jaiswal. The question whether the incident amounted to contempt was also debated by the Bench and SCBA Office bearers. Arun Mishra,J. observed that casting aspersions in the petition itself is contempt.

When SCBA Secretary submitted that the entire SCBA, a body of 16000 members, was strongly behind him, one young AOR stepped to the front and contested the claim. The supporters of SCBA leaders, however, raised uproar against him. Justice Mishra told the young lawyer that this was not the way to protest. The young lawyer then asked, “What is the basis for constitution of this extra ordinary Constitution Bench?”. When he slightly raised his pitch, Justice Amithava Roy, who was silent till then, raised his voice to a higher pitch and questioned the lawyer. “Are you supporting a cause against the Chief Justice of India? It is shocking.”

Mr. Bhushan also rose to support the young lawyer. A few SCBA members, however, began interrupting again. At this moment, the CJI informed the Court that Justice A.K Sikri in his order order required the CJI to lay down the law.

Another Senior Counsel, Mr Ranji Thomas who introduced himself as former Secretary of SCBA came forward and requested the Bench to constitute a full court to decide the issue, which was rejected by all the Judges with a smile, shaking heads.

Arun Mishra,J. then invited the attention of the Court to come to the issue and said ‘ Issue is whether the Constitution Bench  should be constituted based on today’s ( Justice Sikri’s) order or yesterday’s( Justice Chelameswar’s ) Order. Prashant Bhushan responded by saying that he had not seen the order passed by Sikri,J. Arun Mishra,J. directed to hand over the Order to Mr. Bhushan. While Mr Bhushan was reading the order, the Chief Justice  stated  “ This order directs me to lay down the law” .

At this point, Mr. Bhushan, lost his temper and raised his voice and said “You pass whatever order” and stormed out of the Court room.

The Chief Justice then asked Mrs. Jaiswal to respond. She responded, informing them that her case is not on board and was to be listed on Monday.

It was now the turn of the Advocates-on-Record Association to respond. The President of the Association was called by the CJI to address the Court. The Association President supported the SCBA view, and also suggested the need for a gag order to be passed disallowing the press to report the Court proceedings. The CJI, however, did not agree to this.

The CJI then proceeded to dictate the order. The SCBA and the ASG were seen helping the CJI in dictating the order, supplying him with precedents emphasizing on the supremacy of the CJI. One executive member of SCBA came rushing to the front with a Supreme Court Report and invited the attention of the CJI to one paragraph supporting legal view. Mr Ankul Chandra Pradhan, Senior Counsel and Senior Member of SCBA also argued in support of the view of SCBA. Since Mr. Prashant Bhushan, the lawyer for the petitioner had left court room; the proceedings remained as exchanges between the Judges and SCBA office bearers, President of AOR Association and ASG Mr. P S Narsimha.

Mrs. Jaiswal stepped in to remind them that Mr. Bhushan was not allowed to argue. The ASG, however, stepped in, requesting the CJI to list the other matter as well.

The CJI proceeded to dictate the reason for constitution of the Bench and observed that "any order passed contrary this order shall be annulled", clearly annulling Justice Chelameswar's order. The CJI concluded the dictation of the order and posted the Writ Petition after two weeks, informing Mrs. Jaiswal that she would be heard.

There was also a plea for passing a gag order by the President of AOR Association. This was, however, objected to by the CJI, observing that the freedom of press should be protected.

When the plea for initiating contempt proceedings was pressed again, Justice Mishra, who was advocating for the same during the earlier part of the hearing, said that “contempt is a small issue.”

Additional Solicior General P.S. Narasimha was quick enough to respond "That is an example of your lordships’s tolerance".