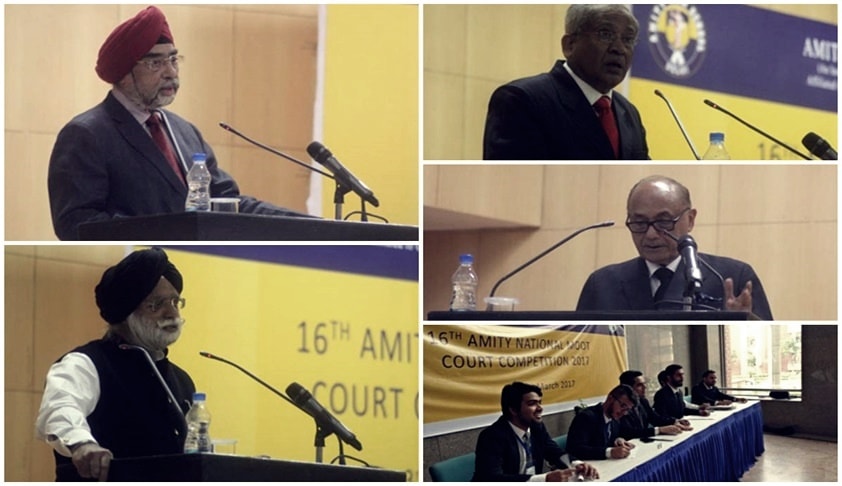 Subscription starts from
₹ 599+GST
(For 6 Months)
View Plans
Premium account gives you:
Subscribe Now
Already a subscriber?
Login
One of the important features of Amity Law School, Delhi has been the Amity National Moot Court Competition, which they have been organising for the past 15 years and it has seen participation in large numbers, from students of reputed law schools/colleges/universities.

This year, they are pleased to announce the 16th Amity National Moot Court Competition, scheduled to take place from March 03, 2017 to March 05, 2017.

The teams battling out in this competition are from 28 different schools/colleges/universities from all over India.

The inaugural event begins with the lighting of the Lamp, by the Chief Guest, Hon'ble Mr. Justice Sunil Gaur, Judge, Delhi High Court following which Chairman, Amity Law Schools, welcomed the guests and the participants.

Guest of Honour, Sh. Lalit Bhasin, Honorary President Amity Law School, Delhi, who addressed the gathering, and appreciated the efforts that Amity Law School, Delhi puts in promoting legal education amogst students, of not only their own college, but also, institutuions across the country, through its annual event. He ended his address, by reminding all the students, that lawyer must know beyond the law & enlarge their vision.

Guest of Honour, Sh. K.T.S Tulsi, Senior Advocate and Member of Parliament, Rajya Sabha said that “a fair hearing is difficult because certain people will plant a fake weapon or plant a fake witness so it is the responsibility of the lawyers to find the truth and do justice to the society.” Further, he talks about the excitement of a criminal trial and hopes students will get to experience it one day. According to him, 'it's a fantastic journey, where the scales change every day.' Overall, he emphasises on the path of candour and righteousness that a lawyer should walk on. He concluded by unraveling the amount of charisma involved in the participation of the law students in the moot courts and that once they fall in love with the moot court they ultimately fall in love with advocacy as well.

Guest of Honour, Sh. A.S Chandhiok, Senior Advocate, Supreme Court of India, addressed the gathering next. While talking on the importance of mooting, he stated that "moot court is just your beginning, as law students, we should spend our first few years in the real world in a courtroom since that will be the foundation, and we will base our career on. He emphasises on the importance of interpretation; a skill every lawyer must utilise in his everyday life.”

The Chief Guest, Hon'ble Mr Justice Sunil Gaur, Judge, Delhi High Court, was presented with the momento, therafter, He wished all the participants luck for the competition.

Dr. Sanjana Sharma, Convener, ANMCC, 2017, presented the vote of thanks to end the Ceremony.

The details of the Event are also available on their Facebook page.
Next Story
Similar Posts
+ View more
Cartoons
+ More