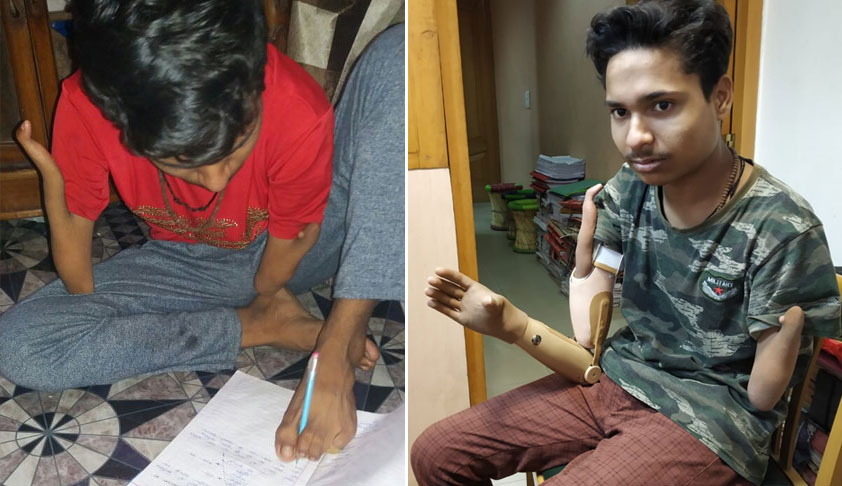 Sixteen-year-old Ritik is ecstatic about his prosthetic right arm and gleefully responds, “Thank you”, to all the congratulatory messages.For the 12th grader and his family, it is nothing less than a special occasion to celebrate with the teenager getting a prosthetic right limb in compliance of the Delhi High Court order from last year.Delhi HC Orders Govt To Give Prosthetic Arms...

Sixteen-year-old Ritik is ecstatic about his prosthetic right arm and gleefully responds, “Thank you”, to all the congratulatory messages.

For the 12th grader and his family, it is nothing less than a special occasion to celebrate with the teenager getting a prosthetic right limb in compliance of the Delhi High Court order from last year.

“I am very happy. I can now write, draw, paint and do whatever I could not do before without being dependent on anybody,” says Ritik, a student of Heera Lal Jain Senior School in Old Delhi, who till some days ago used his feet to draw and paint.

The prosthetic arm was fitted at VIMHANS four days ago and needs a little practice for Ritik to get used to it.

“I have to practice a little to use this hand, but I am very happy,” he says as he writes down his name using the prosthetic limb which is fitted with machinery (bilateral elbow disarticulation myoelectric hand prosthesis and myoelectric system with silicone glove; battery and charger).

The prosthetic limb sends a signal through his nerves above the elbow to his brain and thus works closely like a human limb.

Advocate and social activist Ashok Agarwal, who is instrumental in making Ritik overcome his disability, says, “It is one of the cases where a disabled poor boy has got what was rightfully his. It was not some organisation doing away charity. Here, the Delhi High Court ensured that the government gives him what was his right. This would ensure that he lives a life of dignity.

“One has to see that it was his right as the Rights of Persons with Disabilities Act, 2016 mandates the Governments to provide assistive devices to students with benchmark disabilities free of cost up to the age of 18 years,” adds Agarwal.

Ritik was born with congenital deficiency called bilateral elbow disarticulation. His parents ran from pillar to post to get prosthetic limb for him but the cost of the equipment ran into lakhs of rupees and was too much for his father, a small-time confectioner, to bear.

A chance meeting with Ashok Agarwal at Tis Hazari court provided hope to the parents who had been doing the rounds of the court in connection with a dispute with their landlord.

Agarwal informs that Ritik will soon be fitted with a left prosthetic limb too.

It was a long battle for Ritik, his family and Agarwal who had even written to the Chief Minister before finally moving the high court.

On November 1, a bench of Acting Chief Justice Gita Mittal and Justice C Hari Shankar had directed the Delhi government to ensure that he is fitted with the prosthetic in two months.

Though a little late than the court’s deadline, the compliance of the order has brought cheers on many faces.