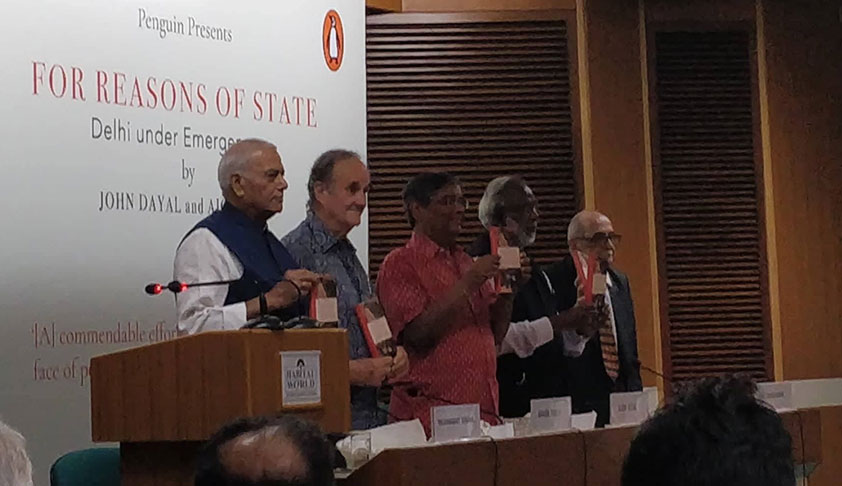 Indians should always remember June 26 and ponder ‘what did we do about it’, said NarimanRecalling the dark days of 1975 Emergency, Senior Advocate and constitutional jurist Fali S Nariman on Tuesday said that while the world today knows about what Indira Gandhi, the then Prime Minister, did and how the judiciary had failed to its duty, the most important thing is what has been done...

Indians should always remember June 26 and ponder ‘what did we do about it’, said Nariman

Recalling the dark days of 1975 Emergency, Senior Advocate and constitutional jurist Fali S Nariman on Tuesday said that while the world today knows about what Indira Gandhi, the then Prime Minister, did and how the judiciary had failed to its duty, the most important thing is what has been done about it.

He was speaking at a discussion on ‘The Emergency: Then and Now’ held by publishing stalwart Penguin at the India Habitat Centre in New Delhi to commemorate the 42nd anniversary of the proclamation of the Emergency in 1975.

The event also marked the re-launch of the book ‘For Reasons of State Delhi under Emergency’ by Ajoy Bose and John Dayal, with the Foreword by veteran BBC broadcaster Mark Tully.

Jurist Nariman emphasised that “we should always remember June 26, just like the people of England ‘Remember, remember! The fifth of November’ as the Guy Fawkes Day”.

“The most important thing is what did we do about it? The MPs congratulated the Speaker and the PM, saying that they could now pass all Bills without any opposition...Chandrashekhar was the sole individual in dissent...we have to talk about it and see the reaction of the people...yesterday there was a documentary on the letter written by the PM to the President for the dispensation of a prior Cabinet meeting to declare the Emergency...this was very important...someone has said that the President, after signing the proclamation, took a sleeping pill and went to sleep soundly...I say if he had done it before (laughter)...when asked what he had to say about the proclamation, Babu Jagjivan Ram (a member of Indira Gandhi’s Cabinet) had replied, ‘Madam, what can be said now that you have already imposed the Emergency’...”

Elaborating on the role of the judges, Nariman iterated, “The judges failed us...the Supreme Court failed us...this is one of the unspoken things...in ADM Jabalpur (1976), four of the senior most judges let us down...Justice HR Khanna, by reason of his brave dissent, was superseded in the appointment as the CJI...”

“There was vacation judge Justice Krishna Iyer’s order [in Indira Gandhi v. Raj Narain (1975), granting a conditional stay on the Allahabad High Court’s judgment setting aside Ms. Gandhi’s election to the fifth Lok Sabha]...I often told him jokingly that it was he who was responsible for the Emergency and not Ms. Gandhi...(Nani) Palkhivala (appearing on behalf of Ms. Gandhi) had threatened him that if an absolute stay is not granted, the country shall revolt....” he narrated, on a lighter note.

He appreciated Justice S Rangarajan in so much far he had, as a Delhi High Court judge, quashed the preventive detention of journalist Kuldip Nayar- “Justice Rangarajan was marched off to Assam on a transfer order...he did not resign like others and went like a good soldier...Additional judge Justice (RN) Aggarwal (member of the division bench comprising Justice Rangarajan) was reverted to the district judiciary...”

“There was a brave and independent judge, Justice TPS Chawla (of the Delhi High Court) who had drawn up a letter of resignation and asked all judges to sign it...’if it goes from 20 judges, the government will take note’, he had said...however, only two judges had signed the same...”, said Nariman, hailing another former judge.

“Never concede dictatorial power to any one person,” signed off the veteran lawyer.

In his turn, former Cabinet Minister and a senior leader of the BJP until recently, Yashwant Sinha, using PM Narendra Modi’s signature greeting ‘Mitron’ to address the nation, urged that “the time to wake up is now and if we do not wake up, we are all in it for the worse”.

Stating that the “danger today is greater than it was in 1975”, he pressed that to ignore the threats merely because “people have not gone to jail and there is no censorship of the media” would be an “error of judgment”.

“The difference between the 1975 Emergency and the undeclared emergency of today is that while the former was only a political state of affairs, the latter has a huge element of communalism...people can be won based on communal hatred...”, he continued.

He lamented the instances of lynching and cited the recent episode where External Affairs Minister Sushma Swaraj was trolled for having “an Islamic kidney” in as much as she ensured that passports were issued to a Muslim man and his Hindu wife.

“After the 44th Constitutional Amendment by the Janata government, the imposition of Emergency under the Constitution has become impossible...but the fear stalks the land even today...the institutions of democracy have been completely compromised and everyone is scared to raise their voice...it is now well known that the Finance Minister did not know about the move of demonetisation until informed in a brief Cabinet meeting...the Home Minister was not aware that the BJP was withdrawing support to the PDP resulting in the President’s Rule in the J&K...when I was the External Affairs Minister, I could not have imagined (the then PM Atal Bihari Vajpayee) not taking me along on international tours...the seniormost ministers have created a situation that the government does not function on the principle of collective responsibility...,” elaborated Sinha.

“At the last session of the Parliament, a motion of no-confidence was sought to be moved against the government by many parties, but day after day the Speaker said she could not count 50 people and the House kept getting adjourned on account of disruptions...the government is running away from letting the members of the  opposition exercise their say...now when the Lok Sabha Elections take place and the President invites the leader of a political party to prove its majority within 10 or 15 days and the same thing happens on the day of the vote of confidence...that a voice vote is taken or the House is adjourned on account of disruption, can you let there be a minority government for six months,” he asked.

He referred to the January 12 press conference held by the four seniormost judges of the Supreme Court: “They said that the benches are being fixed, but the country continues to be in a slumber...they said that the democracy is in danger, but we continue to insist that everything is hunky dory...”

Sinha remarked that the Election Commission of India is “compromised” and so is the RBI, in the light of the 2016 demonetisation.

“The entire investigative machinery of the government can be let loose on anybody who opposes the government...will any investigative agency inquire into the cooperative bank scam in Ahmedabad and how almost Rs. 750 crores were collected in 5 days? No!,” he advanced.

“The district courts pass the most peculiar judgments...there was the instance where The Wire had published a story on someone’s son (BJP president Amit Shah’s businessman son Jay Shah)...,” he continued.

Speaking on the freedom of the press, he sarcastically commented, “There is no censorship...the media is absolutely free...,” adding, “...free to sing praises of the government of the day...”