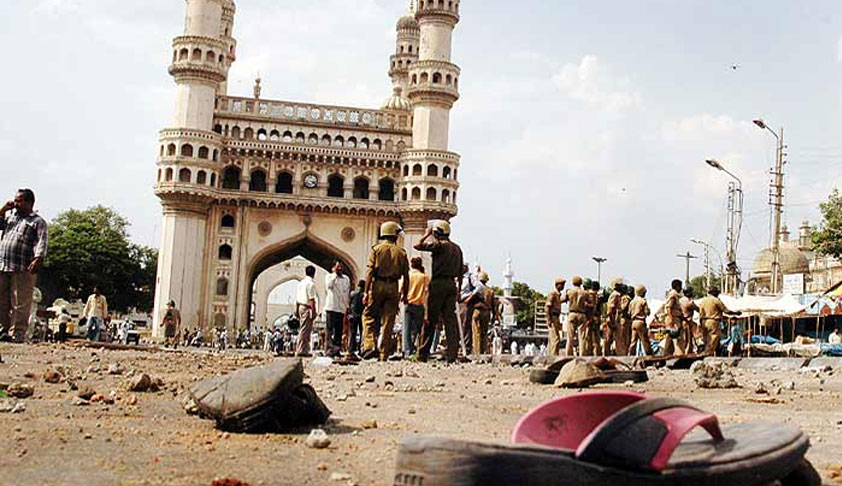 Eleven years after an Improvised Explosive Device (IED) ripped through the heritage Mecca Masjid near Charminar in Hyderabad (now in Telangana) claiming nine lives and injuring 58 persons and with the probe being handed from local police to CBI to NIA, a special court on Monday acquitted Godman Swami Aseemanand and four others accused in the case.

The blast had taken place on May 18, 2007 after the noon prayers on a Friday.

Special NIA court at Namapally delivered the verdict amidst heavy security bandobast after 11 years of trial in which it had examined over 200 witnesses. Over 40 had retracted from their statements.

The NIA has accused Devendra Gupta and Lokesh Sharma of procuring the SIM card while others had assembled the explosive device.

It had said the Masjid, an ASI-protected heritage, was recced twice before the blast.

Originally, 10 accused had been charge-sheeted in the case. One of the accused, Sunil Joshi of Madhya Pradesh, a former Rashtriya Swayamsevak Sangh (RSS) man, was murdered while the case was being investigated.

Two other accused, Sandeep V Dange, former RSS pracharak, and Ramchandra Kalsangra, electrician-cum-RSS activist, also from Madhya Pradesh, are still eluding the investigators. Investigation against another two from the same state, Tejram Parmar and Amith Chowhan, is still on.

Five persons died on the scene while four succumbed to the injuries later.

The blasts had also led to riots and massive uproar which had also claimed at least five lives.

An unexploded IED was also recovered from the Masjid and the modus operandi of detonating the IED using a SIM card matched with the blasts that were triggered in Ajmer Dargah.

Initially, the police probed the case believing it to be a handiwork of Pakistan’s ISI and Harkat-ul-Jihad-al-Islami (HuJI).

At least 24 Muslim youth and men were picked up for alleged role in the blast and accused of having received training in Pakistan but were let off for lack of evidence.

With the local police making no headway in the case, the probe was handed to CBI in 2010.

The CBI then found the involvement of right-wing group in the attack and arrested Devender and Lokesh.

The Centre handed the case to NIA in 2011 which arrested others and revealed that the accused wanted to retaliate to the various terror attacks executed across India since 1998 believing them to have been planned by Muslim outfits.

Aseemanand had in December, 2011 in his confessional statement before a magistrate in Delhi’s Tis Hazari court owned up to planning terror attacks on Ajmer Sharif, Mecca Masjid and Malegaon blast but later retracted from his statement.

In his confessional statement, Aseemanand had said he and other Hindu activists were involved in bombings at Muslim religious places because they wanted to answer every Islamist terror act with “a bomb for bomb’’ policy.