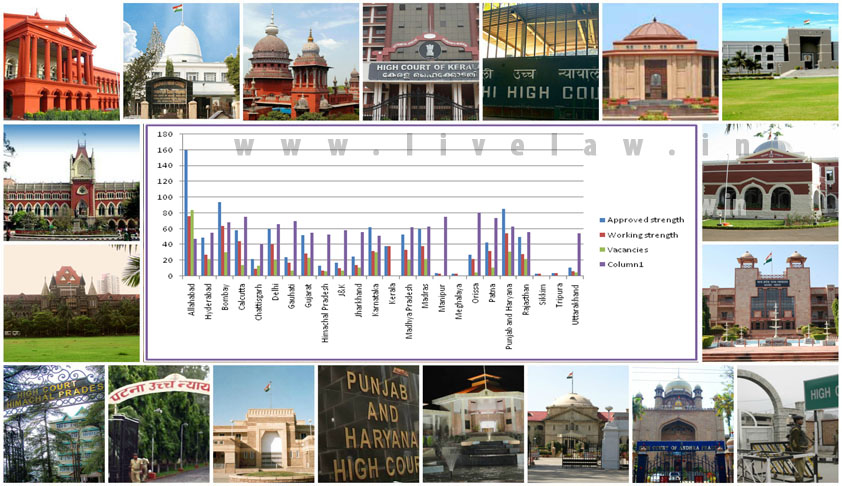 With verdict on the National Judicial Appointments Commission still pending, a total of 384 posts in 24 High Courts of the country are vacant, being a clear indicator of the lack of manpower in the sentinels of justice across the country. The apex Court has 3 vacancies currently.

The following graph shows the approved strength, the working strength and the vacancies in the High Courts across the country, as on 1st August, 2015:

Out of the 24 High Courts, 13 are working on less than 65% of its approved strength, considerably waning the working capacity of the Judiciary.

Madhya Pradesh, Sikkim and Tripura High Courts are the only ones functioning on 100% of its strength. Manipus High Court is functioning with 1 vacancy. Even though Punjab and Haryana High Court has the second largest approved strength, it is working with 63% of that strength.

With the High Courts functioning at 62% of their approved strength, the dream for reducing the pendency of cases is unlikely to materialize in the near future. The condition is aggravated by the absence of any mechanism to appoint or elevate Judges to the High Judiciary.

The Supreme Court had last month reserved its judgment in the National Judicial Appointments Commission (NJAC) case and stated that the interim order would continue to be in effect till the verdict is finally given. You may read the LiveLaw story here.

With the decision still pending, the dismal straits for High Courts is likely to worsen in the near future as there are already large number of vacancies in High Courts which is the main cause for backlog of cases in the country.