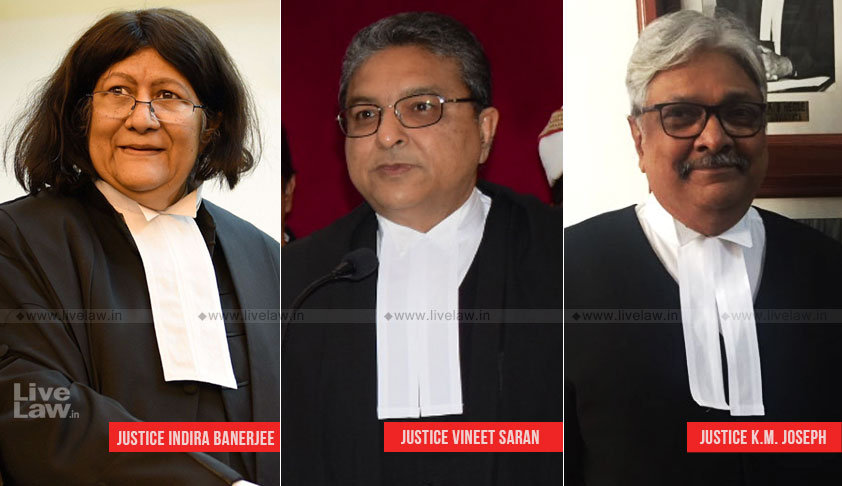 Three new judges— Justice Indira Banerjee, Justice Vineet Saran and Justice KM Joseph were sworn in on Tuesday at 10:30 am in the Chief Justice’s Court, raising the total number of judges to 25, as against the sanctioned strength of 31 judges. A few of the notable judgments delivered by these judges during their tenure at High Court are presented below.Justice Indira Banerjee.Justice...

Three new judges— Justice Indira Banerjee, Justice Vineet Saran and Justice KM Joseph were sworn in on Tuesday at 10:30 am in the Chief Justice’s Court, raising the total number of judges to 25, as against the sanctioned strength of 31 judges. A few of the notable judgments delivered by these judges during their tenure at High Court are presented below.

Justice Banerjee enrolled as an Advocate in July, 1985, and practiced extensively on the Original and Appellate Sides of Calcutta High Court. She was appointed as a Permanent Judge of the High Court in February, 2002, and was transferred to Delhi High Court in August, 2016. She was, thereafter, elevated as the Chief Justice of Madras High Court, a post of which she took charge in April, 2017.

One notable judgment of Justice Banerjee in Calcutta High Court dealt with the issue of consent of woman for sexual intercourse. It was a case where a man was convicted of abducting and raping a woman. The accused had defended himself stating that he and the woman were in a relationship who had willingly came out with him, and that there was no resistance from her against sexual intercourse. The brother judge of Justice Banerjee in the bench, Justice Indrajit Chatterjee, acquitted the accused holding that he had consensual sex. The fact that the woman did not attempt to run away from his company, and the absence of external injury marks in her body persuaded Justice Chatterjee to hold so.

Explaining the nature of free consent for sex, Justice Banerjee succinctly held : "The consent should be spontaneous, stemming from the victim's own desire to sexually unite with the accused. A mere act of helpless resignation in the teeth of compulsion whether by reason of threat of physical violence, emotional blackmail, fear, coercion or duress cannot be consent, as understood in law. In this context it may be pertinent to note that there is a difference between submission and consent and mere non - resistance and / or passive giving in cannot be consent as understood in law. In my view, even emotional blackmail that might reasonably be perceived as a veiled threat to end an existing relationship by calling off an engagement or a marriage proposal would also vitiate the consent".(Laxmi Kantha Kamath v. State of West Bengal 2015 CriLJ 2220)

Her judgment in Srei Equipment and Finance Pvt Ltd v. Khyoda Apik and others AIR 2016 Cal 293 is noteworthy for the clinical analysis of different provisions of Arbitration and Conciliation Act 1996. It was held that an arbitration award can be executed only by a court which could exercise jurisdiction under Section 34 of the Act , and that Court cannot refuse to execute award on ground that assets of judgment debtor were located beyond its jurisdiction.

As the Chief Justice of Madras High Court, Justice Banerjee had to deal with several prominent and contentious issues like the disqualification of AIADMK MLAs by by the Speaker of Tamil Nadu Legislative Assembly. There too Justice Banerjee delivered a dissenting opinion. While Justice Banerjee upheld the decision of the speaker to disqualify the MLAs, her brother judge Justice Sundar disagreed. As the Chief Justice, she referred the matter to be heard by the next senior judge. Her act of nominating the next senior judge to hear the matter, instead of naming any specific judge, was commended by many in the legal circles as an act of fairness and propriety.

Justice Banerjee delivered yet another dissenting judgment in the case concerning the validity of TRAI Regulations. In October 2017, she authored a  judgment, laying down detailed guidelines for recording of statements under Section 164 CrPC and conduct of test identification parade.

During her tenure, the Madras High Court witnessed the rarity of having an all-women bench. Shortly after her appointment as CJ, she sat in combination with Justice Bhavani Subbaroyan. Later, she  sat with Justice R. Hemalatha. Towards the end of her tenure in Madras High Court, she shared bench with recently appointed Justice P.T Asha. Presiding this bench, she authored the judgment holding that arrest of an accused from a court room is illegal, and punished the policemen who carried out such arrest for contempt of court.

As a judge of Allahabad High Court, Justice Vineet Saran authored a judgment, while presiding a Division Bench, holding that the High Court can order CBI enquiry in exercise of powers under Article 226 of the Constitution of India even without consent of the State Govt if the investigation by State Police is demonstrably biased and incompetent(Ravi Kant Gupta v. State of UP 2011 CriLJ 4482).

In Sandhya Goni v.State of Karnataka 2016 CriLJ NOC 30, as a presiding judge of the Division Bench of the Karnataka High Court, Justice Saran held that habeas corpus petition was maintainable at the instance of a mother, from whom custody of a child was illegally taken away by the father. Justice Saran was also part of the Bench which quashed the decision of the Governor of Karnataka to grant sanction to prosecute ex-CM B.S Yeddyurappa. It was held there that the decision of the Governor was not based on relevant materials(B.S Yeddyurappa v. Princpal Secretary to His Excellency Governor of Karnataka 2016 CriLJ 778).

As the Chief Justice of Orissa High Court, the Division Bench headed by Justice Saran held that the High Court can impose restrictions on news-reporting by print and electronic media to prevent interference with criminal trial. The matter pertained to media reporting an alleged incident involving with some advocates misbehaving with a lady inspector.  There, directions were issued to restrain media from publishing the name and photographs of the accused persons and informants, on the basis of finding that exaggerated reporting of the incident tend to interfere with administration of justice (High Court Bar Association, Odisha v. State of Odisha AIR 2017 Ori.62)

The legalistic fervour of Justice Saran is manifest from the judgment Mohapatra Binders and others v. Innprint and others AIR 2017 NOC 2015 which held that precedents which were not based on legal principles but misplaced sympathy cannot be regarded as binding. In Manuel Antonio Da Anunciaco Parkasch v. Republic of India, AIR 2017 NOC 444, Justice Saran held that a foreigner cannot complaint of infringement of fundamental rights due to denial of citizenship.

Justice K M Joseph carries the rich legacy of his illustrious father Justice K.K Mathew. Justice Joseph enrolled as an Advocate in January, 1982, and was appointed as a Permanent Judge of the Kerala High Court in October, 2004. He was then transferred to the Uttarakhand High Court and assumed charge as the Chief Justice in July, 2014.

The most debated judgment of Justice Joseph is the one which quashed the imposition of presidential rule in Uttarakhand in 2016. The judgment - delivered on sharing bench with Justice V.K Bist-  held that it was not open for the Governor to control the exercise of discretion vested with another constitutional authority, the Speaker. The imposition of presidential rule was termed "unwarranted". The judgment was rendered despite noting the allegations of corruption against the then incumbent CM Harish Rawat. It was held that the issue had to be addressed at a more fundamental level of federalism and constitutional democracy.

As a judge of Kerala High Court, the bench presided by Justice Joseph ordered the demolition of several resorts built encroaching the backwaters of Kerala, in Ratheesh K R v State of Kerala. The constructions were found to have flouted CRZ Regulations. The judgment expressed anguish and concern at the alarming rate of environmental depradation, which was described as “ecocide”.

“The threat of global warming has assumed alarming proportions. In matters relating to the protection of the environment, a short sighted and myopic approach, may satisfy some and may be many in the short run. But, the Court when it enforces laws in protection of the environment becomes the custodian of the interests of not only the present generation, but also of posterity. While it is convenient and even may sound as just to overlook the mandate of a cumbersome or seemingly oppressive law, both the law giver and the Courts have to enforce the law and cannot but act with vision. Prompt and effective enforcement of such laws will in due course result in the inculcation of the values embedded in the law as habits which will be followed by the future generations”,Justice Joseph observed in the judgment.

In Alexander CC v. Jacob Antony , the bench headed by him held that illegitimacy was no bar for a minor child to claim maintenance from biological father,as the claim was based on paternity and not legitimacy. It was also held that Family Court has jurisdiction determine the issue of paternity.

In Pavithran v. District Superintendent of Police, Justice Joseph, as a single judge, ruled that loudspeakers cannot be used beyond midnight, even for religious and cultural functions.

Justice Joseph is known to have a penchant for constitutional law and jurisprudence. He has a special eye for details, and perceives legal issues in his own unique manner.  Legal principles, which are not commonly known and used, are often invoked in his judgements.  In once case, he expounded the obscure principle of "Desuetude", which states that law, which has not been in use for a considerable long time, is deemed to have been repealed by consistent usage to the contrary( Davis B.O v. B.T Martin and another, Kerala HC)

A direction issued by Justice K.M Joseph regarding prison reforms had earned him encomiums from veteran Justice V. R Krishna Iyer.  Justice V.R Krishna Iyer wrote him a letter, congratulating him.  The letter, which has been accessed by Live Law, reads as follows

I respect you for many reasons beyond being the sublime son of my dearest brother Justice Mathew. I was once a minister in charge of prisons meant to implement the fundamental duty of compassion towards all living creatures I had reformed the prisons of Kerala from its British barbarity to humane divinity. Today, a friend of mine pointed out that the philistinic barbarity still lurks in our prison and a prisoner was badly beaten in Aleppey Sub Jail. And you a humane justice with compassion ordered an enquiry compelled in your soul by a sense of love and kindness.

Your are truly a great Chairman of Kerala Legal Services Authority. The rule of law serves its purpose only when it ennobles life in all its dimensions.

I congratulate you on the order you have passed and hope the Legal Services under your supervision will make humanism and justice in Kerala prisons undergo a transformation. The newspaper report about your direction also mentions about the inhumanity in the jail where people who are prisoners freely smoke which will cause cancer mortality. In a room of 14, says the Mathrubhumi report, there are 40, which in itself is a condemnation of suffocation and suffering. O, the pity of it!'