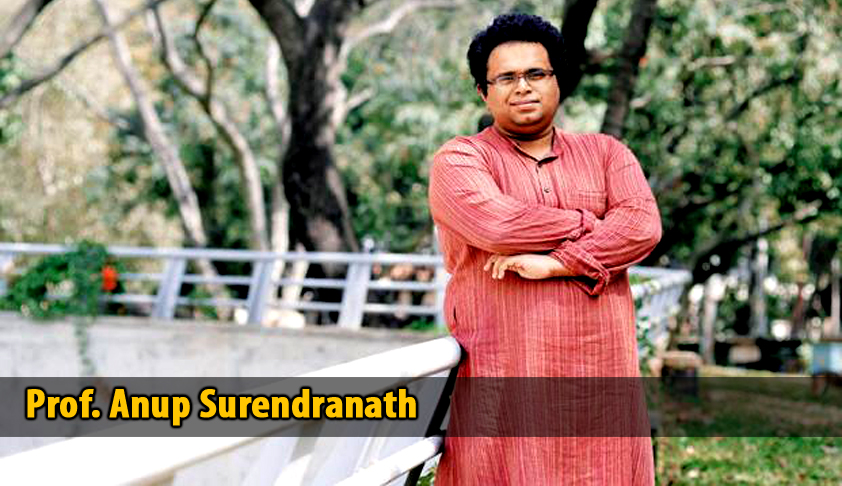 On 7 March, 2017 NALSAR Lecture Series on Constitutionalism hosted its eighth speaker, Dr. AnupSurendranath. Dr. Surendranath, a NALSAR alumnus, heads the Centre on the Death Penalty which has been credited with the seminal Death Penalty India Report, the first-ever empirical work on the administration of the death penalty in India. The topic of the lecture was closely related to his...

At the outset, he cautioned that the topic he has chosen to speak on is not a pleasant one and involves complex questions with uncomfortable answers. His lecture was significantly influenced by his empirical work and direct engagement with prisoners on death row. He started off by highlighting the dichotomy of opinions that exists with respect to death penalty byreading excerpts from the US Supreme Court decision of Callins v. Collins. Justice Blackmun, in his dissent, poignantly describes the process of taking away someone’s life through a mechanical judicial process and the uncertainties surrounding the same. On the other hand, Justice Scalia, in his concurring opinion, emphasized the heinous nature of certain crimes and the acceptability of death penalty in such cases.

Dr. Surendranath began by mentioning that the uniqueness of death penalty, contrary to popular belief, does not lie in its irreversibility. Had that been the case, death penalty would be problematic only in scenarios of wrongful conviction. Instead, he believes that its uniqueness lies in the looming uncertainty about one’s future and not knowing if and when one would be killed.Such uniqueness affects the very institution of death penalty, regardless of whether the conviction is right or wrong.

He then exposed the abstractness of the debate surrounding capital punishment and the large distance from which this reality is viewed. The unpleasant details thereof, such as eyes popping out, tongue falling, involuntary excrement, etc. are hidden from us by the state which makes for a hollow debate merely about argumentation and divorced from questions of emotions, pain and sympathy. He brought forththe fact that extra-judicial killings are legitimized in India. When such killings go unchallenged, the guarantees of procedural rights, which are otherwise a bare minimum, come to be seen as a luxury. Further, groups such as Muslims and Dalits, who have statistically been found to be subjected to death penalty the most, often argue for stricter punishment, for instance in the Kherlanji massacre and Laxmanpur Bathe massacre. This seems paradoxical, since such beliefs tend to legitimize state inflicted violence which eventually affects these very groups.

Having outlined the bases and the context for his arguments, he moved to the legalprovisions surrounding capital punishment. The Supreme Court can and has dismissed death penalty SLPsin limine.Justice Nariman, speaking for majority in the Supreme Court case of Mohammad Arif, stated that death penalty review petitions must be heard in open court given that different judges might come to different conclusions about the same facts. There is thus a clear inconsistency that exists- if SLPs can be dismissed in limine, what is the court expected to review in open court? Although the constitutional discretion vested in the court in admitting SLPs cannot be done away with, but the court can develop practice where death penalty petitions are not dismissed in limine.

In India, the right to legal aid has a limited scope and does not extend to the right to consult a lawyer during police custody. This limitation, coupled with the draconian Section 27 of the Indian Evidence Act, facilitates police tortureand makes for a dangerous admixture. The existence of Section 27 has been justified on the pretext of enhancing the ostensibly low rates of conviction in India. Dr. Surendranath clarified that a high conviction rate is not a desirable end in itself. Instead, how such convictions are achieved is something that should be relevant in a democracy that follows rule of law.Another important observation made was that the court has shown undue deference towards special legislations passed on the grounds of national security to prevent terrorist activities.Many of the abovementioned problems, he recognized, plague the entire legal system and not just capital punishment. However it is incumbent to see the broader context and contours of the criminal justice system in which such death penalty is administered.

A tempting measure that could be taken to remedy the procedure in death penalty cases is to require that the prosecutor give notice to the court and the defense lawyer that death penalty would be sought at a later stage. In doing so, the defense lawyer would get sufficient time to prepare a defense for the sentencing phase, which ordinarily the lawyer has about one day to do. Further, this would ensure that the judges are more careful and scrutinize the evidence more rigorously at the initial stages of the trial. However, this proposal could be counter-productive since prosecutors could then start claiming death penalty for all crimes.

He touched upon the evidently inconsistent practice of courts in applying the rarest of rare doctrine.Even the mitigating circumstances as listed in Bachan Singh are looked at by the courts in a piece-meal fashion. The fact of poverty or existence of a family is nota mitigating circumstance in itself. Mitigation requires a reconstruction of the entire life of the prisoner so as to not reduce her/ his identity to one event. However, this never happens in any sentencing decision. Often the sentencing proceedings happen in the absence of the lawyer or the accused or don’t even happen at all.The Supreme Court’s response in such cases isto ask for arguments to be presented before it. In such a scenario, the accused would have missed out on presenting the case before other judges from the lower courts. He buttressed this by Justice Nariman’s statement in Mohammad Arif that different judges may come to different conclusions in death penalty cases. Therefore, Dr. Surendranath proposed that the determination of death penalty must be unanimous across all judicial levels.

Socio-economic factors and the identity of the accused do show a systemic trend against marginalized populations. Such discrimination cannot have any bearing on an individual case and is only something that can be invoked in strategic litigation or challenging the constitutionality of certain provisions.Dr. Surendranath went on to describe problems with mercy petitions. Jails have a standard format for mercy petitions, which he aptly remarked to be “death by templates”. The only role played by the mostly illiterate prisoners in these petitions is affixing their thumb impression on the petition.The Presidential power to grant mercy has been accepted as a constitutional power subject to review on limited administrative law grounds. The President, however, is not required to give any reasons for the decision.

Before concluding the lecture he said that a lot of abolitionists have found the idea of life imprisonment without the possibility of review desirable. But to him this amounts to “handpicking cruelty”. He stated that the possibility of a review cannot be precluded even if the sentence extends to the natural life of the prisoner.