[Exclusive] : A true Account by Anoop Kumaran , who slayed draconian 118(d) of Kerala Police Act, along with 66A IT Act; Why our ruling class panic of the democratization of communication space? 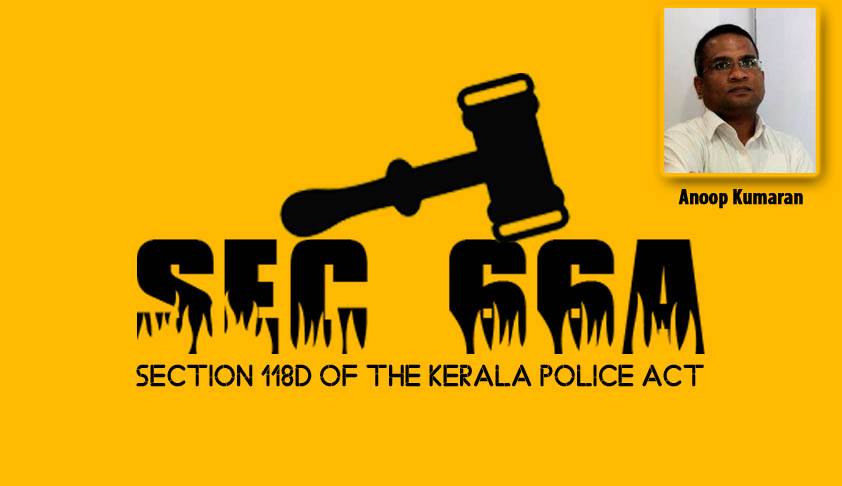 The recent judgment of the Honourable Supreme Court of India in Shreya Singhal v. UoI [Anoop.M.K v. UoI] is a milestone in the history of fights for rights and freedom in India. It will be hailed for years to come for upholding the freedom of speech and expression. In this case, the Supreme Court declared section 66A of the Information Technology Act and Section 118d of the Kerala Police Act...

The recent judgment of the Honourable Supreme Court of India in Shreya Singhal v. UoI [Anoop.M.K v. UoI] is a milestone in the history of fights for rights and freedom in India. It will be hailed for years to come for upholding the freedom of speech and expression. In this case, the Supreme Court declared section 66A of the Information Technology Act and Section 118d of the Kerala Police Act as unconstitutional. This decision raises important questions as to what prompted the central and the state legislature to enact such laws and what is happening at the ground level when these laws are implemented?

I was one of the petitioners in the case that challenged the controversial provision of the IT Act. In addition to that, Section 118d of the Kerala Police Act was also challenged by me. In fact, I was the only petitioner who drew the attention of the Supreme Court to the issue of unconstitutionality of Section 118d of the Kerala Police Act. This is not an elaborate and in-depth analysis of the Supreme Court judgment. Instead, my attempt is to narrate the series of events that led me to understand and personally experience the oppressive way in which these laws were implemented and how it eventually prompted me to legally challenge their constitutionality.

I am a member of an organization namely “Manushyaavakaasha Koottaayma” that intervenes in human rights and environmental issues in Kodungallur in Trissur district of Kerala. The saga of events that led to the case began with one of my actions in “facebook” that cannot be depicted as a punishable offence by any stretch of imagination. In January 2014, I, “liked” a comment on “facebook” related to an agitation for wages by nurses at the CRAFT Hospital, Kodungallur. The hospital responded to the “facebook” post by filing a police complaint against those who ‘liked’ it. The retaliatory approach of the Hospital was evident from the fact that it cherry picked its ‘enemies’ from more than 1000 persons who “liked” that comment and I was one of their enemies. This indeed exposes the misuse of a law by powerful to suppress critical voices.

The second instance that led me to file the case happened in June 2014 when a local journalist of “Malayala Manorama”, a Malayalam Daily, received an award. I commented on a facebook post on this award by asking a question ‘Is this the post-modern model of fatherless journalism?’.

I was arrested on the basis of these two responses made by me on “facebook”. The two laws mentioned above provided ample opportunity to the executive in the State to curtail my constitutionally guaranteed freedom. How can my expression of support to a lawful protest by nurses for their legitimate rights could be a punishable offence? How can my expression of sarcasm and cynicism to a specific award can be a reason to confine me in jail? Unfortunately, the provisions of IT Act and the Kerala Police Act authorised such extreme actions. The misuse of the IT Act was so rampant in the recent times that a number of petitions were filed in the Supreme Court from different parts of the country. I am privileged that my participation in this justice administration process led to the striking down of one of the draconian provisions in the Kerala Police Act.

The only sensible explanation to the disproportionate reaction by the police is that many powerful groups in Kodungalloor including the police department found my interference with different social and environmental issues against their interests and ego. The legal actions against me were initiated three weeks after I obtained a stay from a civil court against felling of a tree in front of a local police station, and it speaks volumes about their malafide intention. The police presumably developed a grudge against me and they were apparently more than happy to act upon a complaint filed by the journalist of Malayala Manorama against whom I allegedly posted a comment. I was arrested under Section 118D of the Kerala Police Act and later released on bail. A week later, the police decided to act upon a six months old complaint against me filed by the CRAFT Hospital. This time, I was arrested under section 66A of the IT Act. Again, I was released on bail. Both these cases are now pending trial.

The manner in which I was arrested twice highlights an important aspect where we need to evaluate a law, that is, whatever may be the noble intentions behind a law, the crucial aspect remains how it is implemented at the ground level. My experiences are proof of the fact that the draconian laws were used against those who criticised the government machinery or those who were close to that system.

The genealogy of section 66A of the IT Act of 2009 may be traced back to section 10(2)(a) of the U.K. Post Office(Amendment) Act, 1935, which made it an offence to send any message by telephone which is grossly offensive or of an indecent, obscene, or menacing character. This Section was substantially reproduced by section 66 of the UK Post Office Act, 1953. This Section in turn was replaced by section 49 of the British Telecommunication Act, 1981 and Section 43 of the British Telecommunication Act, 1984. In its present form in the UK, it is Section 127 of the Telecommunication Act, 2003. Punishment under the U.K Act is maximum upto 6 months but in the Indian Act it is 3 years. Our Lok Sabha passed it without any serious discussion. In Rajya Sabha, Sri. P.Rajeev,M.P raised concerns about the law. Nevertheless, the Bill was passed without any amendments.

The Section 118d of the Kerala Police Act, was introduced when Left Democratic Front led by Communist Party of India (Marxist) was ruling Kerala and Mr.Kodiyeri Balakrishnan was the home minister. The rationale behind section 118d was to prevent misuse of electronic media to resort to abusive comments against women. Mr V.D. Satheeshan, M.L.A representing Indian National Congress as a member of the legislative panel on the Bill, said the section was incorporated in tune with the IT Act. He stated that “In Kerala, a large number of women were facing abusive comments, mails and phone calls. Police had informed us that a major chunk of complaints from women pertained to abusive calls. There had been several instances in which morphed images were used to tarnish women. In Kerala, thousands of women live alone while their husbands work abroad. Such women have always been the target of malicious mails or calls. The particular section was added in the Police Act with a good intention. There was no voice of dissent against this section either from the committee or from the members of the Assembly when the draft was discussed.”

Section 118 of the Kerala Police Act deals with penalty for “grave violation” of public order. As per Section 118d, any person who causes annoyance to others in “an indecent manner” by statements, comments, calls or messages by any means shall face, on conviction, jail for three years or a fine of upto Rs 10,000 or both.

We can see that the concerns for protecting women from abusive comments as reflected in Mr.V.D.Satheesan’s statement have not found a place in the provision and there was no express gender sensitive expression in section 118d of Kerala Police Act. A close and careful analysis of the process and intention would reveal the actual politics behind the irresponsible law making by our legislatures. In parliamentary democracy, political parties compete for power and this political class will become a part of the same class(ruling class)eventually, irrespective of the fact that they are following different ideologies or interest. They tend to consider themselves as a different genus and privileged and keep themselves away from the people.

Majority of us could not (or did not) challenge the privilege enjoyed by the ruling class due to the dearth of a forum to express our concerns, opinions and dissent. However, the scenario changed dramatically with the onset of new social medias such as “facebook” and “twitter”. The dramatic developments in the information technology arena have made communication more accessible. It also led to democratization of technology. This process indeed opened up wide opportunity to the common man to question the hegemony of the ruling and political class. These social medias posed a serious challenge to the monopoly and control over information by the political and other influential class. This new development indeed has ‘disturbed’ and ‘annoyed’ the ruling class and even created paranoia on them. Apparently, the criticisms and comments against the political and other influential class through social media by people who are otherwise denied a forum to agitate lawfully had prompted the ruling class to ‘use’ law to gag these voices. To put it in a different way, the ruling class decided to protect their privilege by criminalizing the acts of ‘disturbance’ and ‘annoyance’ by the so called unprivileged citizens.

Needless to say, that the adoption of such laws expose the supreme arrogance, undemocratic attitude, and disrespect to the Constitution by the ruling class. If such laws can be enacted by our legislators and people can be sent to jail under the cover of such laws, it reveals nothing but a dangerous trend in our political system where the ruling class and their allies believe that they have unlimited power to do anything even by violating the constitutional rights of our citizens. Thankfully, the Supreme Court upheld the constitutional rights and freedom and highlighted the message that the ruling class cannot bend the laws to protect their vested interests. Hats off to the honourable Supreme Court, the petitioners, lawyers and supporters. This decision must be celebrated for keeping ablaze the citizen’s flame of hope in Indian democracy and Constitution.