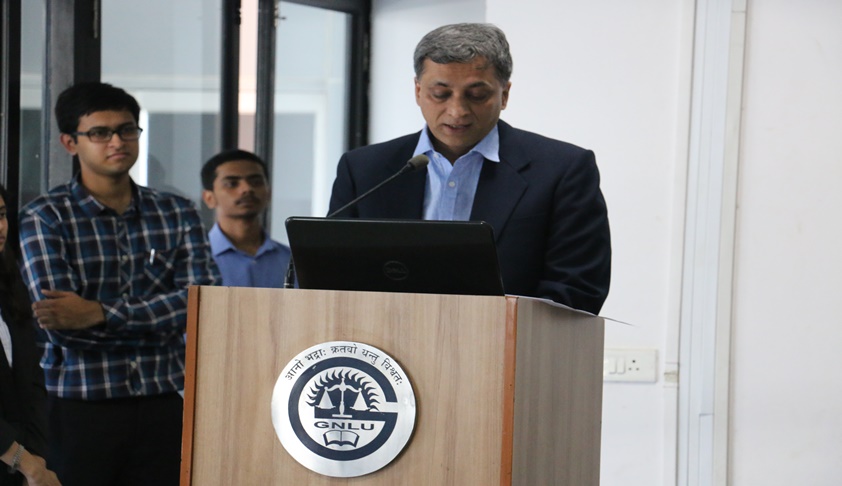 The GNLU Centre for Law and Society organised an Open House session on ‘The Right to Privacy and Aadhaar Scheme’, with Mr. Shyam Divan, Senior Advocate, Supreme Court of India sharing his insights on the topic ‘Liberty, Privacy and Aadhaar: Has the Supreme Court Ushered In A Surveillance Society?’In the course of his address, he shared a personal experience from a visit to a school in...

In the course of his address, he shared a personal experience from a visit to a school in a village in Jharkhand, where failures of the fingerprint authentication system were creating ghosts, against the proclaimed objective of the system being to eliminate false identities.

He expressed concerns with the present system—though the Aadhaar is a seemingly well-organised system, the troubling aspect is the electronic tracking of a person as he progresses through life. The tracking will eventually usher in a surveillance state. The collection of data would enable the State to build profiles of individuals. In this context, he stated: “This will leave an indelible authentication trail which will give the State and its organs tremendous power over individuals.”

Speaking about the linking of Aadhaar to various services, he stated that “while all this is welcome from a convenience perspective we need to ensure that our liberties are intact. If Aadhaar is allowed to grow and expand unchecked…it is possible easily to profile an individual”.

The concerns that the petitioners in the case had raised was that if over time, every service was linked to Aadhaar, “the disabling of Aadhaar would mean civil death.”

Mr. Divan pointed to two affidavits from the petitioners—and an expert report from the UIDAI that all indicated the dangers of the Aadhaar degenerating into a surveillance state, but in the exercise of a veto, the majority judgment did not deal with these affidavits and reports. Instead, reliance was placed on a PowerPoint presentation prepared by the CEO of the UIDAI.

Mr. Divan pointed out that the necessary linking of all services with the Aadhaar manifests a deep distrust of the state towards the citizenry. “The state regards us as a nation of knaves, a tragic distortion of republican government.”

The most severe criticism was reserved for the majority opinion that the Aadhar Act qualified as a Money Bill. On a plain reading of Article 110, in conjunction with all the sections of the Aadhaar Bill, it was evident that there is no manner of interpreting an Act like Aadhar as one that fell within the ambit of Article 110. The Supreme Court nevertheless decreed that it did fall under Article 110 and did not have to pass through the scrutiny of the Rajya Sabha. This aspect of the judgment emphasises the importance of the Rajya Sabha in the legislative process and the Court’s power of judicial review over the decision of the Speaker.

Mr. Divan elucidated the court’s shrinking and containment of the expanse of Aadhaar’s reach. Linking must not be made mandatory for telephone numbers, bank accounts, for children and for the purposes of national examinations.

However, the inherent contradiction in allowing children to opt out of the Aadhaar scheme once they attain majority is that PAN card must mandatorily be linked with Aadhaar. This effectively renders redundant the exercise of an option for all tax-paying citizens. By referring to subsidies and benefits to those drawn out of the Consolidated Fund of India, the court has further circumscribed the potential expansion of the Aadhaar.

The court shrunk the period of storage of metadata from 5 years to 6 months, which dealt a blow to the UIDAI’s aspirations of using the data for fraud detection.

A very pertinent part of the petitioner’s arguments that the courts failed to deal with was the exclusionary effect that the failures of the Aadhaar system engender. Authentication failures exclude persons from subsidies and schemes to which they are entitled. The State becomes blind to individuals, and only recognizes and reduces them to a number. In a democracy, individuals must be afforded a choice of how they can be identified.

Mr. Divan concluded that the Supreme Court draws its legitimacy in the eyes of citizens from its powers of reasoning and analysis. But the majority falls short in reasoning in several aspects. In relation to this, he said, “The Court has faltered and failed to summon the constitutional and institutional courage to decide correctly a case like this.”

Voicing his opinion on the effect of the judgment, Mr. Divan said that the court has “…dramatically scaled down the Aadhaar monster, leaving it a shrunken and relatively skeletal creature”. He went on to say that “the dissenting judgment gives us hope and it is the principles in this that will endure”. He expressed hope that “Inconsistencies in the majority judgment will stand exposed and liable to correction in the future”.

The Aadhaar has been “defanged but not destroyed”, and the corporates and the government are bound to come roaring back with new legislations and strategies. It is the “eternal task of the citizens to remain vigilant”.