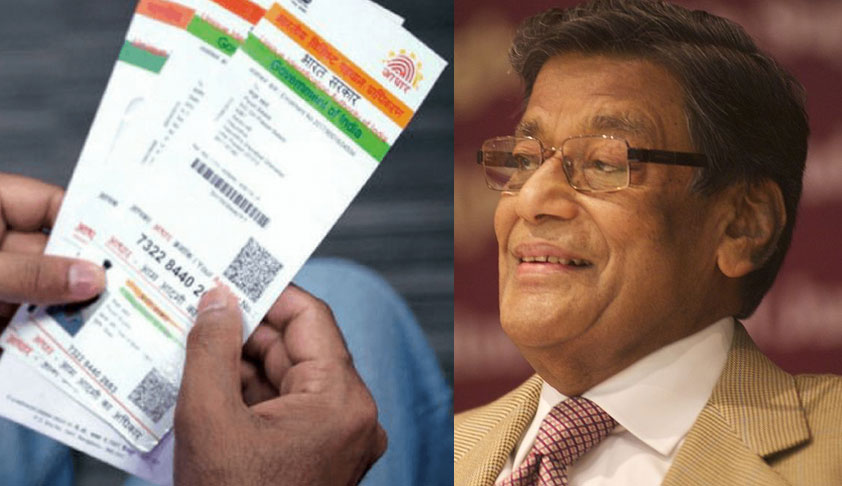 As the Aadhaar hearing resumed post the lunch hour on Wednesday, Attorney General KK Venugopal continued his submissions: “Section 12 of the Food Security Act of 2013 envisages Aadhaar for the PDS scheme... in the 2017 judgment of the apex court in Binoy Viswam (on the linkage of Aadhaar with PAN cards under Section 139AA of the Income Tax Act of 1961), the use of technology in the form...

As the Aadhaar hearing resumed post the lunch hour on Wednesday, Attorney General KK Venugopal continued his submissions: “Section 12 of the Food Security Act of 2013 envisages Aadhaar for the PDS scheme... in the 2017 judgment of the apex court in Binoy Viswam (on the linkage of Aadhaar with PAN cards under Section 139AA of the Income Tax Act of 1961), the use of technology in the form of Aadhaar to ameliorate the concerns of fictitious identity has been appreciated...”

Thereupon, he read out portions of the said judgment: “In book An Uncertain Glory- India and its Contradictions, Amartya Sen and Jean Dreze have noted that the societal reach of economic progress in India has been remarkably limited; the SIT on black money has cited the multiple options of identification as a factor; a committee on money laundering has expressed concerns regarding multiple, bogus identities; as many as 11.35 lakh cases of fake PAN cards have come on record; Linkage of Aadhaar with PAN cards is in compliance with India’s international obligations such as the 2015 Inter-Governmental Agreement with the USA.”

Then, Justice AK Sikri inquired, “How could the Employees Pension Scheme be covered under Section 7 of the Aadhaar Act? Pension is earned by an employee after rendering service. Where is the question of fake ID here?”

“Many pensioners have complained of fake IDs...,” the AG sought to submit.

“The argument of exclusion becomes even more prominent in these cases...say, one’s son is settled in America and he also moves there post-retirement, how will he go through the Aadhaar-based authentication to retrieve his pension,” asked Justice Sikri.

“Say, someone from the Army is staying abroad. The system must be robust to provide for these instances,” added Justice DY Chandrachud.

The AG on Wednesday drew the attention of the bench to the UIDAI circular dated November 15, 2017 on the ‘Applicability of Aadhaar as an Identity Document for NRIs/ PIOs and OCIs’.

“The government shall not deny a rightful entitlement,” he remarked.

In response, the AG relied on sections 2(b) and 3 of the Aadhaar Act to indicate that the project is applicable only to ‘residents’, adding that the government shall provide for all contingencies.

“Pension accounts are all separate; there is no joint pension account...like, after my father passed away, the family pension account was only in my mother’s name...no one but that individual can operate it...where is the question of bogus identity...,” inquired Justice Chandrachud.

“What about an individual who is suffering from Alzheimer’s or dementia? At the age of 85-90 years, individuals do not have fingerprints...where would they go for authentication,” the judge continued his query.

In response, the AG submitted that even individuals suffering from leprosy have been enrolled under the project.

“How do we construe ‘Subsidies, Benefits and Services’? Like there may be LPG subsidy, but pension cannot be said to be a subsidy...,” asked Justice Chandrachud.

In response, the AG submitted that pension is drawn out of the Consolidated Fund of India and hence, is covered under Section 7 as a ‘benefit’.

“Every good scheme has flaws...we would rather the government admit upfront that there is a problem of financial exclusion, instead of saying that no one has come to the court to complain...the fact that the cabinet secretariat has recently dealt with the issue is indication enough...,” remarked Justice Chandrachud.

Thereupon, the AG made submissions on the right under Article 21 of poverty-stricken people: “Human rights are not violated by terrorism alone, but also by financial inequalities...right to security in unemployment, old age, illness is a Fundamental human right...Mahatma Gandhi has said that the world has enough for everyone’s needs but not for everyone’s greed...the Committee on Economic and Social Rights has in 2001 observed that poverty is a state of economic depravation...income poverty, human development poverty and social exclusion together constitute ‘poverty’... UNESCO has observed that poverty becomes a denial of justice if allowed to continue...”

In respect of concerns such as lack of Aadhaar, failure of authentication, extraneous factors like absence of electricity or internet connectivity, the AG indicated notifications, including one of the Ministry of Food, stipulating that till Aadhaar is assigned, ‘Subsidies, Benefits and Services’ shall be provided on alternative ID proof; and that in the event of failure of biometric authentication, Aadhaar card in physical or electronic form shall suffice.

“The Aadhaar Act shall also be amended from time to time,” assured the AG.

Thereupon, he read from the World Bank’s ‘Identification for Development’ report: “Official identification is more than a convenience; it is a fundamental human right... it is indispensable for electoral participation, financial assistance, health and social services, recognition by the government etc; yet over 2 billion people all over the world, particularly women and children in Asia and Africa, lack identification...”

“If the purpose is identification, why is there aggregation and centralisation of data under the Aadhaar scheme,” inquired Justice Sikri, in the light of the question of proportionality.

“There is no question of any aggregation,” responded the AG.

On mention thereof by senior counsel KV Vishwanathan, the bench on Wednesday allowed the petitioners the right to pose questions through the Chief Justice and not as “freewheeling cross-examination”.