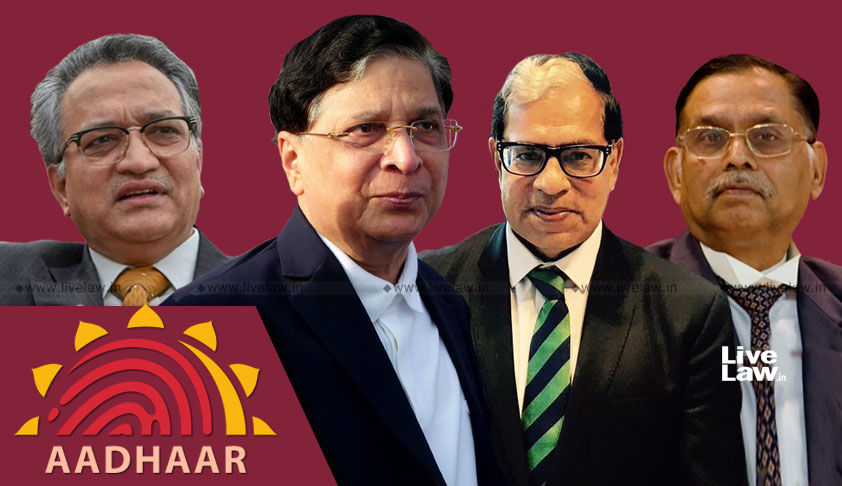 Much awaited Aadhaar Judgment is finally out.The judgment authored by Justice AK Sikri, which has concurrence of Chief Justice Dipak Misra and Justice AM Khanwilkar, has read down some of the provisions of the Aadhaar (Targeted Delivery of Financial and Other Subsidies, Benefits and Services) Act 2016, struck down a few but significant ones (mainly Section 33(2), 47 and 57), and upheld...

Much awaited Aadhaar Judgment is finally out.

The judgment authored by Justice AK Sikri, which has concurrence of Chief Justice Dipak Misra and Justice AM Khanwilkar, has read down some of the provisions of the Aadhaar (Targeted Delivery of Financial and Other Subsidies, Benefits and Services) Act 2016, struck down a few but significant ones (mainly Section 33(2), 47 and 57), and upheld the rest.

* Nov 2013: SC orders all states and Union Territories be impleaded as respondents.

the Centre's decision to treat Aadhaar bill as a money bill.

* Aug 24, 2017: SC nine-judge bench rules that right to privacy is a fundamental right.

* Jan 25: SC asks Chhattisgarh HC to modify in 10 days its order directing all trial courts in the state to mandatorily accept copies of Aadhaar card for releasing an accused on bail.

* Feb 21: SC says the alleged defect that citizens' biometric details under the Aadhaar scheme were being collected without any law, could be cured by subsequently bringing a statute.

* Mar 7: SC says Aadhaar number not mandatory for enrolment of students in all India exams.

* Mar 13: SC extends March 31 deadline of Aadhaar linking till it gives its order.

* Mar 22: UIDAI CEO says breaking the Aadhaar encryption may take "more than the age of the universe for the fastest computer on earth".

* Apr 17: SC raises concerns that there is a threat of Aadhaar data misuse.

* Sep 26: SC upholds constitutional validity of Aadhaar but strikes down certain provisions including its linking with bank accounts, mobile phones and school admissions.

The following summary from the judgment gives clear idea about which all provisions got erased from the statute and which all will remain in a changed form.


Aadhaar Do Not Tend To Create A Surveillance State.

The majority judgment authored by Justice Sikri also holds that the architecture of Aadhaar, as well as the provisions of the Aadhaar Act, do not tend to create a surveillance state. It was observed that this aspect is ensured by the manner in which the Aadhaar project operates. The judges also found that it is very difficult to create profile of a person simply on the basis of biometric and demographic information stored in CIDR and -Insofar as authentication is concerned, there are sufficient safeguard mechanisms.

In this regard, the majority judgment holds as follows.

The Court held that all matters pertaining to an individual do not qualify as being an inherent part of right to privacy. Only those matters over which there would be a reasonable expectation of privacy are protected by Article 21. It also held that the Aadhaar scheme, which is backed by the statute, i.e. the Aadhaar Act also serves legitimate State aim. However, the court clarified-

With regard to enrolment of children, the court held as follows:

The bench which also observed that Aadhaar Act meets the concept of Limited Government, Good Governance and Constitutional Trust, upheld the passing of the Act as a ‘Money Bill’. It said that Section 7 is the core provision of the Aadhaar Act and this provision satisfies the conditions of Article 110 of the Constitution.

The court further held that Section 139AA of the Income Tax Act, 1961 is not violative of right to privacy as it satisfies the triple test (I) existence of a law; (ii) a ‘legitimate State interest’; and (iii) such law should pass the ‘test of proportionality’,

However, the bench held that the move of mandatory linking of Aadhaar with bank account does not satisfy the test of proportionality. It has been also held that Mandatory linking of mobile number with Aadhaar is held to be illegal and unconstitutional as it is not backed by any law.

Following is the summary from Justice Ashok Bhushan’s judgment