Aadhaar Is A Switch Which Can Cause Civil Death Of An Individual: Senior Advocate Shyam Divan Submits Before 5-Judge Constitution Bench [Read Opening Statement] 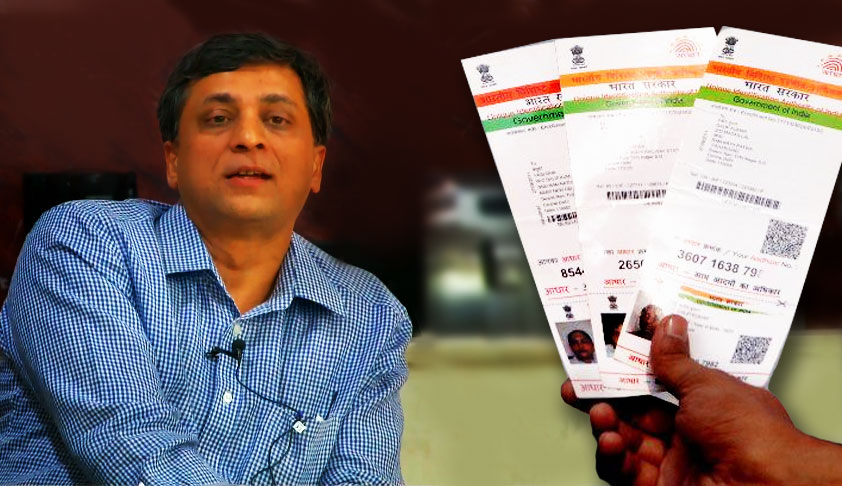 The hearing on the Constitutional validity of Aadhaar cards is currently progressing in the Supreme Court, with Senior Advocate Shyam Divan submitting that the Aadhaar "seeks to tether every resident of India to an electronic leash".As per the opening statement on behalf of the Petitioners as handed over in Court today, Mr. Divan explains, "This leash is connected to a central data base that...

The hearing on the Constitutional validity of Aadhaar cards is currently progressing in the Supreme Court, with Senior Advocate Shyam Divan submitting that the Aadhaar "seeks to tether every resident of India to an electronic leash".

As per the opening statement on behalf of the Petitioners as handed over in Court today, Mr. Divan explains, "This leash is connected to a central data base that is designed to track transactions across the life of the citizen. This record will enable the State to profile citizens, track their movements, assess their habits and silently influence their behavior. Over time, the profiling enables the State to stifle dissent and influence political decision making. As the Aadhaar platform extends to private corporations, the degree of tracking and extent of profiling will exponentially increase. Several State governments have started using the Aadhaar platform to build profiles of residents that is reminiscent of totalitarian regimes."

Mr. Divan has further submitted that Aadhaar "alters the relationship between the citizen and the State", while diminishing the status of the citizen. All rights, he asserts, have now been made conditional on a "compulsory barter", averring, "The barter compels the citizen to give up her biometrics ‘voluntarily’, allow her biometrics and demographic information to be stored by the State and private operators and then used for a process termed ‘authentication’. The State issues an Aadhaar number and then requires the number to be embedded across service providers and agencies -- unless the number is seeded in databases of the service provider, the citizen is denied access to these most essential facilities. Inalienable and natural rights are dependent on a compulsory exaction."

The State, he says, has been handed over a "switch by which it can cause the civil death of an individual". He contends, "Where every basic facility is linked to Aadhaar and one cannot live in society without an Aadhaar number, the switching off of Aadhaar completely destroys the individual.

Could it ever be envisaged that under this Constitution which ‘We the People’ have fashioned after a long freedom struggle steeped in sacrifice, the State can arrogate to itself so much power that it can ‘extinguish’ a citizen or be willfully blind with respect to a citizen who would like to identify himself in a manner other than Aadhaar?"

He finally asserts that Aadhaar, if allowed to roll out unimpeded, will "reduce citizens to servitude". He, thereby, apprises the Court of the demand that an option be given to people who are enrolled with the Aadhaar programme to opt out and to delete the data with suitable certification for compliance. He further contends that even if the Aadhaar Act is  upheld, every person should be entitled to services and benefits through alternative means of identification.

"Negatively, nothing can be withheld from a citizen merely because she/he does not have an Aadhaar card or does not wish to use their Aadhaar card," he submits.

Thereafter, Mr. Divan highlights the following list of key issues that arise in the case: