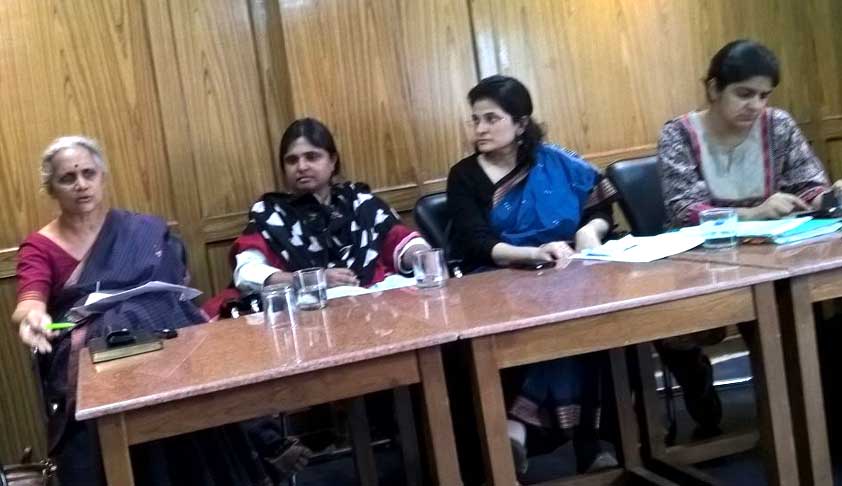 At a press conference held in New Delhi today, activists from different walks of life, condemned the Government’s move to deny legitimate benefits to people, if they do not procure the Aadhaar identity. The speakers included Bezwada Wilson of Safai Karmachari Andolan, Dipa Sinha of the Right to Food Campaign, Anjali Bhardwaj of Satark Nagrik Sangathan, Amrita Johri of Sathark Nagrik...

At a press conference held in New Delhi today, activists from different walks of life, condemned the Government’s move to deny legitimate benefits to people, if they do not procure the Aadhaar identity.

The speakers expressed their anguish that in the last few months there have been a series of notifications making Aadhaar mandatory, in direct violation of the orders of the Supreme Court.

On 28 February, the government has notified that children will not be served their midday meal unless their aadhaar numbers have been embedded in the data base. This is just one in a long list of coercive steps taken by the government.

The activists alleged that this is in flagrant contempt of the orders of the Supreme Court that aadhaar can not be used at all except in six specified schemes and even in those schemes, it can be complied with only voluntarily.

The Government’s recent notifications indicate a callous disregard for the lives and health of the people of this country, especially the poor, the activists alleged.

Thus aadhaar has been made a prerequisite for getting disability scholarships, education stipends, enrolment in adult literacy programmes, registration for career for scheduled castes and tribes, among many many others. It even includes the scheme that is supposedly to assist women rescued from trafficking - and so marking them in data bases for life, the activists lamented.

Several of these notifications impact women directly including the recent one making Aadhaar mandatory for the mid day meal scheme, for the Public Distribution Scheme and for women rescued from trafficking or sex work.

Apart from the blatant illegality of these notifications, their impact on women's lives, individual rights and liberties has not been examined, they pointed out.

Accusing the Government of promoting Aadhaar through these notifications making it mandatory, Usha Ramanathan asked whether it is driven by its ambition to make India, a digital superpower. She explained that the strategy is to first enrol people, and get their data, and weed them out later.

Saying that in the name of Aadhaar, intimate details of people are being shared with corporates, she claimed that business ambitions and philanthropy go hand in hand.

She further pointed out that people are completely insecure in this process, as the Government seems determined to experiment with its own people, who are hapless.

She expressed her concern that different segments of population are getting trapped into Aadhaar, and the objective of the Government is to threaten, and not to reach the benefits of the people.

Anjali Bharadwaj explained that the argument that Aadhaar is required to fight corruption is a bogus one.

Bezwada Wilson, one of the petitioners before the Supreme Court, who has challenged the constitutionality of Aadhaar on the ground of right to privacy, described the scheme as anti-poor. He pointed out that Aadhaar ignores the problem of identity of vulnerable communities. “We want to bury our identity, but the society does not allow us. Aadhaar will be a stigma for us”, said the Magsaysay award winner.

Saying that sanitation workers have a right to conceal their identity, Wilson asked whether Aadhaar would make them brand ambassadors as scavengers.