Adulterous Woman Can’t Be Treated As Victim And The Man, Seducer: Justice Indu Malhotra on Striking Down S.497IPC 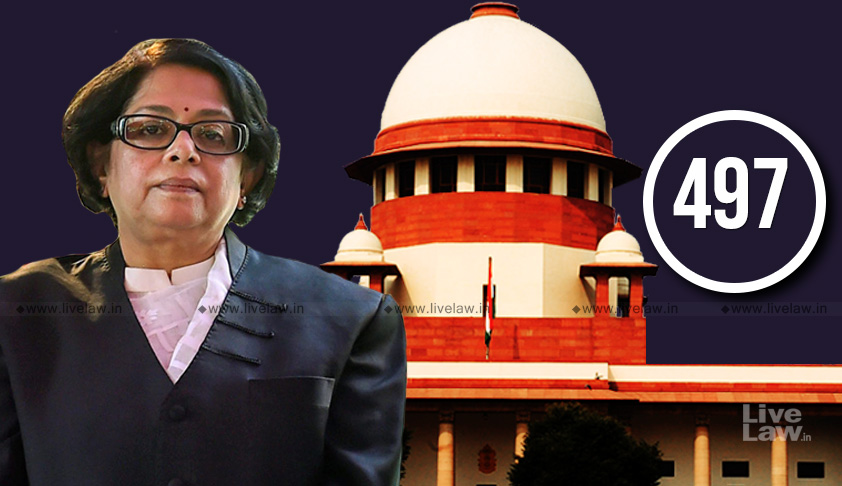 Sec. 497IPC Can’t Be Called Beneficial Legislation, Can’t Take Cover Under Protective Discrimination Of Art. 15(3)It perpetuates stereotype, deprives women her right to prosecute.Striking Section 497IPC for not being gender-neutral, Justice Indu Malhotra has said in her part of the judgement that it would be unrealistic to proceed on the basis that even in a consensual sexual relationship...

It perpetuates stereotype, deprives women her right to prosecute.

Striking Section 497IPC for not being gender-neutral, Justice Indu Malhotra has said in her part of the judgement that it would be unrealistic to proceed on the basis that even in a consensual sexual relationship out of marriage, a married woman is a “victim” and the male offender is the “seducer”.

Taking note of times in which the provision was brought on the statute book and the changes in the Indian society after it, Justice Malhotra said, “It would be unrealistic to proceed on the basis that even in a consensual sexual relationship, a married woman, who knowingly and voluntarily enters into a sexual relationship with another married man, is a “victim”, and the male offender is the “seducer”.

In Revathi’s case, the two-judge bench of Supreme Court had dismissed the challenge to Section 497IPC as discriminatory by holding that the absence of the right of the wife of an adulterous husband to sue him, or his paramour, was well-balanced by the inability of the husband to prosecute his adulterous wife for adultery while in Sowmithri’s case, the apex court repelled the plea against Section 497 IPC on ground that it is commonly accepted that it is the man who is the “seducer” and not the woman.

While putting Section 497IPC to test, Justice Malhotra said, “Any legislation which treats similarly situated persons unequally, or discriminates between persons on the basis of sex alone, is liable to be struck down as being violative of Articles 14 and 15 of the Constitution, which form the pillars against the vice of arbitrariness and discrimination,” said Justice Malhotra, adding that “Section 497 fails to consider both men and women as equally autonomous individuals in society”.

“A law which deprives women of the right to prosecute, is not gender-neutral. Under Section 497, the wife of the adulterous male, cannot prosecute her husband for marital infidelity. This provision is therefore ex facie discriminatory against women, and violative of Article 14. Section 497 as it stands today, cannot hide in the shadows against the discerning light of Article 14 which irradiates anything which is unreasonable, discriminatory, and arbitrary,” she added.

The court also cautioned that,“The right to live with dignity includes the right not to be subjected to public censure and punishment by the State except where absolutely necessary” and “the State must follow the minimalist approach in the criminalization of offences, keeping in view the respect for the autonomy of the individual to make his/her personal choices”.

Anomalies And Incongruities In Sec. 497 IPC

Justice Malhotra said Section 497IPC was replete with anomalies (listed below) which would render the provision liable to be struck down on the ground of it being arbitrary and discriminatory.

Under Section 497, it is only the male-paramour who is punishable for the offence of adultery. The woman who is pari delicto with the adulterous male, is not punishable, even as an “abettor”. The adulterous woman is excluded solely on the basis of gender, and cannot be prosecuted for adultery.

Section 497 IPC read with Section 198(2) of the CrPC only empowers the aggrieved husband of a married wife who has entered into the adulterous relationship to initiate proceedings for the offence of adultery.

The act of a married man engaging in sexual intercourse with an unmarried or divorced woman, does not constitute “adultery” under Section 497 IPC.

If the adulterous relationship between a man and a married woman, takes place with the consent and connivance of her husband, it would not constitute the offence of adultery.

The first classification is based on who has the right to prosecute:

The second classification is based on who can be prosecuted.

“The aforesaid classifications were based on the historical context in 1860 when the IPC was enacted. At that point of time, women had no rights independent of their husbands, and were treated as chattel or “property” of their husbands. Hence, the offence of adultery was treated as an injury to the husband, since it was considered to be a “theft” of his property, for which he could proceed to prosecute the offender. The said classification is no longer relevant or valid, and cannot withstand the test of Article 14, and hence is liable to be struck down on this ground alone,” she said.

155 Yrs Hence, Adulterous Woman Can’t Be Treated As Victim And The Man, Seducer

She noted that law commissioners have debated that women in India should not be punished for adultery considering their plight which was much worse than the women in France and England as here women were being married while they were very young and had to bear with co-wives etc.

“Section 497 of the IPC was framed in the historical context that the infidelity of the wife should not be punished because of the plight of women in this country during the 1860s. Women were married while they were still children, and often neglected while still young, sharing the attention of a husband with several rivals. This situation is not true 155 years after the provision was framed. With the passage of time, education, development in civil-political rights and socio-economic conditions, the situation has undergone a sea change. The historical background in which Section 497 was framed, is no longer relevant in contemporary society. It would be unrealistic to proceed on the basis that even in a consensual sexual relationship, a married woman, who knowingly and voluntarily enters into a sexual relationship with another married man, is a “victim”, and the male offender is the “seducer”.

“The time when wives were invisible to the law, and lived in the shadows of their husbands, has long since gone by. A legislation that perpetuates such stereo-types in relationships, and institutionalises discrimination is a clear violation of the fundamental rights guaranteed by Part III of the Constitution. There is therefore, no justification for continuance of Section 497 of the I.P.C. as framed in 1860, to remain on the statute book,” she said.

On Centre’s argument that Section 497 IPC is valid on the ground of affirmative action and all discrimination in favour of women is saved by Article 15(3), and hence were exempted from punishment, Justice Malhotra said: “Article 15(3) of the Constitution is an enabling provision which permits the State to frame beneficial legislation in favour of women and children, to protect and uplift this class of citizens. Section 497 is a penal provision for the offence of adultery, an act which is committed consensually between two adults who have strayed out of the marital bond. Such a provision cannot be considered to be a beneficial legislation covered by Article 15(3) of the Constitution.”

“The true purpose of affirmative action is to uplift women and empower them in socio-economic spheres. A legislation which takes away the rights of women to prosecute cannot be termed as beneficial legislation.”

“The court in Kalyani (supra) observed that ‘The provision is currently under criticism from certain quarters for showing a string gender bias for it makes the position of a married woman almost as a property of her husband. A Section which perpetuates oppression of women is unsustainable in law, and cannot take cover under the guise of protective discrimination’,” she said.

Justice Malhotra also considered the two views—the State has a legitimate public interest in preserving the institution of marriage and the contra view that adultery is a marital wrong, which should have only civil consequences.

After considering both views, she said, “In my view, criminal sanction may be justified where there is a public element in the wrong, such as offences against State security, and the like. These are public wrongs where the victim is not the individual, but the community as a whole” and went on to add, “Adultery undoubtedly is a moral wrong qua the spouse and the family. The issue is whether there is a sufficient element of wrongfulness to society in general, in order to bring it within the ambit of criminal law?”

“The element of public censure, visiting the delinquent with penal consequences, and overriding individual rights, would be justified only when the society is directly impacted by such conduct. In fact, a much stronger justification is required where an offence is punishable with imprisonment.

The State must follow the minimalist approach in the criminalization of offences, keeping in view the respect for the autonomy of the individual to make his/her personal choices,” she held.

“The right to live with dignity includes the right not to be subjected to public censure and punishment by the State except where absolutely necessary. In order to determine what conduct requires State interference through criminal sanction, the State must consider whether the civil remedy will serve the purpose. Where a civil remedy for a wrongful act is sufficient, it may not warrant criminal sanction by the State,” held Justice Malhotra.

She then ordered that Section 497 be struck down as unconstitutional being violative of Articles 14, 15 and 21 of the Constitution.

(ii) Section 198(2) of the CrPC which contains the procedure for prosecution under Chapter XX of the IPC shall be unconstitutional only to the extent that it is applicable to the offence of adultery under Section 497.