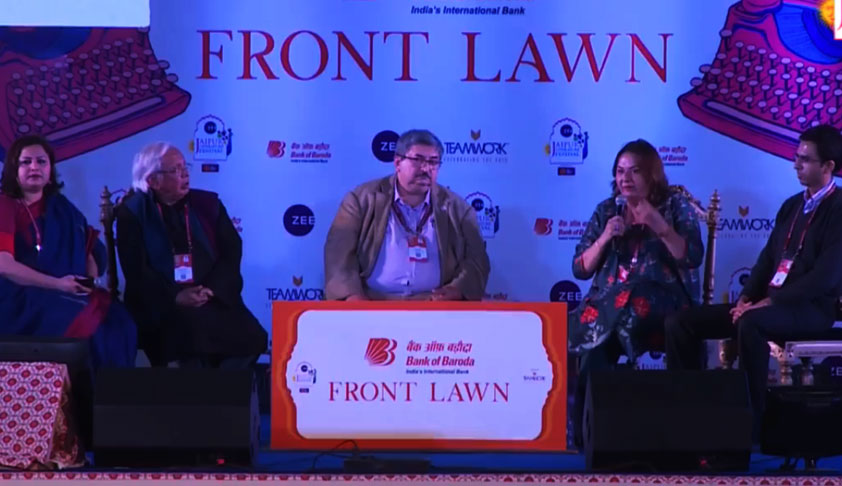 Advocating to make ‘sedition’ a non-cognizable, bailable offence and reducing the term of imprisonment while seeking statutory backing for the definition of ‘sedition’ as envisaged in the 1962 judgment, Bombay High Court Lawyer Abhinav Chandrachud has said advocates should be given absolute protection from criminal defamation.He was speaking at a debate held at the ongoing Zee...

Advocating to make ‘sedition’ a non-cognizable, bailable offence and reducing the term of imprisonment while seeking statutory backing for the definition of ‘sedition’ as envisaged in the 1962 judgment, Bombay High Court Lawyer Abhinav Chandrachud has said advocates should be given absolute protection from criminal defamation.

He was speaking at a debate held at the ongoing Zee Jaipur Literature Festival on the issue of freedom of speech and expression in India, in context of his book, Republic of Rhetoric- Free Speech and the Constitution of India.

On the occasion of the 69th Republic Day, Chandrachud remarked opening the session, “BR Ambedkar regarded the Republic Day as the Independence Day as on this day, India got its Constitution and the dominion status of 1947 came to an end. The Constitution is the fountain head of all rights that the people in this country enjoy. But the Constitution has sought to maintain status quo and not bring in a major change- what I call the ‘Nehruvian balance’ between change and continuity.”

“Some limbs of the Constitution are very radical, such as, Article 17, making untouchability punishable, and Article 18, abolishing titles. There is also the right to vote. On the other hand is Article 19(1)(a), conferring the freedom of speech and expression, which is curtailed by the restrictions of sedition, obscenity, hate speech, contempt of court, etc, by Article 19(2)- the provisions of the IPC, which was drafted in colonial India, have been introduced in the Constitution. ‘Sedition’ was a misdemeanour, a bailable offence punishable with 2 years’ imprisonment in England, but in colonial India, it was a non-bailable offence attracting life imprisonment. The situation has not changed post Independence. With the introduction of the CrPC of 1973, it is also cognizable offence,” he continued.

Later, senior counsel Pinky Anand said, “No right can be absolute either in India or elsewhere. One person’s right is another person’s obligation; a large number of interests have to be reconciled. Can one be allowed to harm the security of the State, its foreign relations or defame another in the exercise of their right?”

“Although ‘sedition’ under Section 124A of the IPC does not require an act of violence as an ingredient of the offence, in the case of Kedar Nath v. State of Bihar (1962), the Supreme Court observed that only seditious acts that incite violence shall be punishable. Even obscenity is being interpreted in accordance with the contemporary standards of the society. A transition is coming,” she continued.

Author Vajpeyi addressed three issues - one, how the language of public discourse has become harsh and abusive, foreclosing discussions; two, how the power of language is being undermined by simplistic interpretations, for instance, in the recent case of agitation against the public exhibition of the film Padmaavat even before it was displayed; and third, how the public life is dominated with lies.

CBFC member Tikoo spoke of the lack of consensus between the judgments of different high courts and the apex court on the freedom of speech and expression. In relation to the judicial trend of certification of films, she advanced that the “content be judged in the context of the narrative of the film”.

In respect of the Padmaavat issue, the ASG submitted, “The ban by the states was not on the film, but in view of the law and order situation. What would happen if people were hurt, assaulted and battered? It is the obligation of the State to protect the citizens.”

“Are we not elevating the right to be offended over and above the freedom of speech,” asked the mediator.

In response, Chandrachud said, “This is what is called the heckler’s veto, where what you can or cannot say is decided by another. Justice Oliver Wendell Holmes Jr has said that freedom of speech does not allow one to falsely shout ‘fire’ in a theatre and cause panic. But I believe that if there is a possibility that you can reason with the speaker and debate with him, there should not be any need to impose a ban, like in the case of the film.”

“Every allegedly wrongful act should be judged individually on its merits. The Supreme Court ordered that the film should be released so it has been released. The rule of law confers the right on the judiciary to check if something is wrong,” added Anand.

Tripathi posed another question: “There are restrictions in the IPC. Some restrictions have also been incorporated in the Constitution. So is it now the time for a change? If yes, how will a change be brought about? Or will a change only be for the worse?”

Chandrachud replied, “‘Sedition’ has been deleted as an offence in the UK in 2009. But though that may not be desirable in India, as when a FIR is registered, a policeman may not be able to distinguish between the concepts of advocacy and incitement, ‘sedition’ should be made a non-cognizable, bailable offence and the term of imprisonment should be reduced. Also, the definition of ‘sedition’, as envisaged in the 1962 judgment, should get statutory backing.

He also suggested that advocates should be extended absolute protection from criminal defamation, and not a qualified privilege where they are made to undergo trial to prove that a comment was made without malice and this was also supported by Pinky Anand.

The ASG, agreeing with Chandrachud on the aspect of the definition of ‘sedition’ in the Kedarnath judgment and the exemption to advocates from criminal defamation, added, “However, the right to dissent should only be permitted to a limit.”

In response to the question as to the one change that they desire in context of the freedom of speech and expression, Chandrachud voiced his desire for the transformation from the regime of censorship to certification: “If I can watch the finest Ukranian pornography on my laptop, does one need to decide how long the onscreen kiss between James Bond and Monica Bellucci should be?”

Opposing external restraint to the largest extent possible, Anand stressed on “constraints of reasonableness” and the need for “education with responsibility and innovation”.