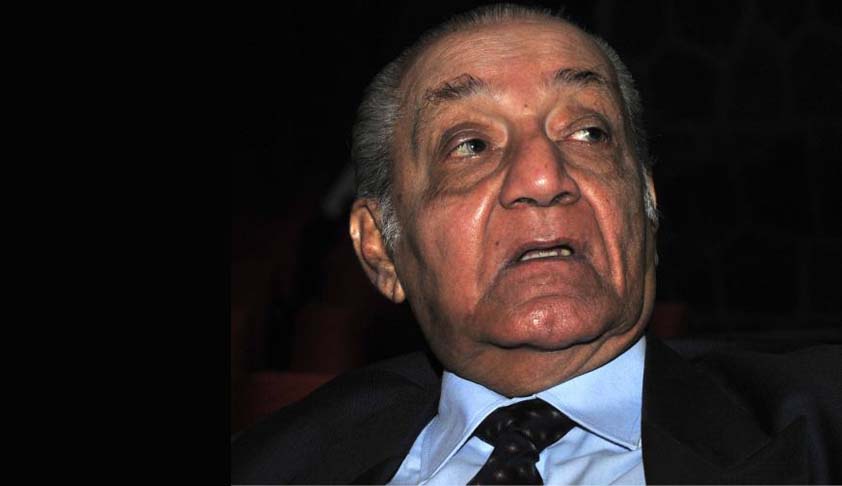 Constitutional law expert, a well-known author, A G Noorani has been conferred with the Sixth IOS Lifetime Achievement Award.The Institute of Objective Studies had organized a function regarding the same and the award was presented by the ‘Scroll of Honour’ by Lt Gen Zameer Uddin Shah, the vice chancellor of Aligarh Muslim University (AMU).In addition, Justice A M Ahmadi, former Chief...

Constitutional law expert, a well-known author, A G Noorani has been conferred with the Sixth IOS Lifetime Achievement Award.The Institute of Objective Studies had organized a function regarding the same and the award was presented by the ‘Scroll of Honour’ by Lt Gen Zameer Uddin Shah, the vice chancellor of Aligarh Muslim University (AMU).

In addition, Justice A M Ahmadi, former Chief Justice of India presented a cheque of Rs. 1 lac while Justice A K Sikri, judge, Supreme Court of India, presented the memento to him.

Justice Sikri presided over the function and remember his college days and said that he read Noorani’s books in college. He said, “Some people were sent by God to accomplish the important jobs assigned to them. They performed the job well by creating a milestone. Noorani is one of them, who by his works, has carved out a niche for himself. Everybody is not that fortunate.” Justice Sikri added, “What matters to them is recognition and honour. It is difficult to say who is honoring whom; whether the society is honouring Mr Noorani (sic) or by honouring him, it is honouring itself. Either way, it was a win-win situation. Both of them must feel honoured.”

Justice A M Ahmadi described Mr. Noorani as a prolific writer on social issues. Speaking about the current social situation in the country, he said, “Attempts are being made to scare away the Muslims who constitute the largest minority. A calculated move is on to marginalise the Muslims by denying the fundamental rights guaranteed under the Indian Constitution.”Justice A M Ahmadi relied on judgments in Kesavananda to buttress his point. He said, “This was next to impossible so long as the Indian judiciary remained independent.”

Reportedly, he also observed that the government at the Centre was autocratic and the perception of threat to minorities has increased. Invoking the speech made by late President of India, Dr Zakir Husain who had said, “how the AMU will look at India, will decide the future of Muslims in the country and the way the country will look at the AMU, will decide the future of democracy in India.”

He also said, “The then Union Education Minister MC Chagla took upon himself the responsibility to reduce the AMU to a department of the Ministry of Education. The erstwhile vice chancellor of AMU Nawab Ali Yavar Jung could not resist him. This was the beginning of a process to undermine the status of the University as a Centre of High Academic Excellence. Luckily, the present incumbent, Lt Gen Shah had done a yeoman’s job in restoring the past glory.”

Justice Ahmadi is also a recipient of this award.

Speaking at the function, Mr. Noorani said that AMU should document all available materials on threat to minorities in an area wise manner. Regarding riots he said, “the Commissions of Inquiry set up to probe the circumstances leading to riots, had conclusively found that they were aided, abetted and organised by the RSS and its organisations such as Bajrang Dal and BJP.”

He also spoke on the need of promoting education amongst Muslims. He said, “That discrimination against Muslims was growing could be gauged from the fact that two Muslim young boys were denied jobs by a diamond business house in Mumbai recently.”

The chairman of IOS Dr Mohammad Manzoor Alam said that by honouring Mr. Noorani, the institute was valuing the finest values of humanity. He said, “These values are held sacred by our religions, faiths and the Constitution which entrusted us with the task of building a humane society.” He added, “For our young nation, we need role models who stood for harmony and represented the diversity of our great country.”

In his welcome address, Professor Z M Khan, the secretary general of IOS said that Mr. Noorani was known in academic and intellectual circles and “his comments on and analyses of issues are of high order. The IOS is modestly contributing to the study of the plight of the have-nots and the marginalised sections of society.”

Vice Chancellor Lt Gen Shah also spoke at the event and said that AMU is the first green university in country. He also talked about the role of AMU in preserving the Urdu culture.

Dr Pervez Miyan, chairman of Delhi Hajj Committee, and the Ambassador of Egypt to India were also present at the function.