Ahlmad Arrested Over Keeping Judge's Car Waiting Behind His Car For Parking: Staff At Rohini Court Goes On Strike 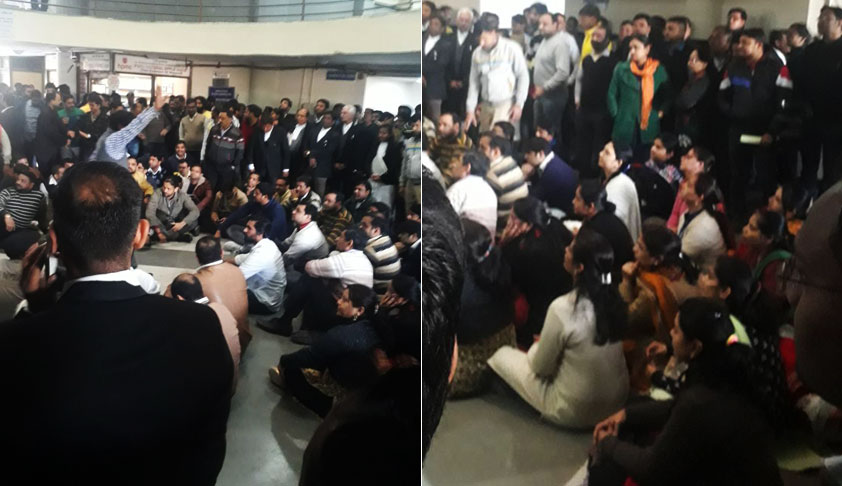 In yet another face-off between a judge and the court staff, majority of court staff at the Rohini District courts went on strike on Thursday soon after an ahlmad was arrested following a small exchange of words with a judge this morning over car parking.

The staff was released at about 1:30 pm after being in arrest for three and half hours.

District and Sessions Judge (headquarters) Talwant Singh reached Rohini Court and referred the complaint of employees' union to the greivance committee after which the strike was called off.

As to what really happened, sources say, on Thursday morning, the ahlmad posted in a mahila court, was parking his car in the parking area of the court.

Sources at Rohini court informed that since the entry for vehicles for administrative judges and the staff is the same, the civil judge concerned had to wait behind the ahlmad's parking vehicle for some seconds before the lane was clear and he could take a turn to enter the judge's car parking area.

The judge, said one of the protesting staff, lost his cool since he had to wait behind the car of a staff, and started abusing the ahlmad.

The ahlmad asked the judge to not use abusive language only to send his temper soaring, another staff said.

The judge, on the spot, asked the chowki incharge to arrest the ahlmad for insulting him and he was taken in custody and is still under arrest.

As the news spread, the staff called off the work. The strike was joined by many stenographers, ahlmads and group D workers.

The protesting staff reached the court chowki but did not block the passage for long.

One of the staff posted in Rohini court spoke on condition of anonymity, "This is petty. If the entry for vehicles is same, the car has to wait behind another vehicle. What is the ego issue in this? How was the ahlmad at fault? Judges should not forget that Ahlmad is a very responsible post and he handles so much work pressure, including coming early and staying at work till 8 pm."

Another ahlmad posted at Tis Hazari court also commented on the "sad state of court staff" as he said, "It is a play or game for judges to take staff in custody on petty issues related to their ego problems. Car parking is not such a big crime that one is to be taken in custody."

While some staff said the Rohini Court Bar Association has extended its support to the staff, the association's honorary secretary Rakesh Chahar denied the claim.

"We have not supported any side till now. We do not even know the true facts which led to this strike by the staff. First, we will assess the situation, the reason, listen to both sides and then take a call," said Chahar.

He also claimed that work at the court has not been affected by the strike.

It is to be noted that Thursday's incident is the latest in the long list of acrimonious situation between judges and staff.

Late last year, the incharge of judges' library at Tis Hazari court had sent a written complaint to the high court when he was insulted and arrested on the orders of a judge after he refused to issue a Bare Act to a court staff since the rules did not allow the same.