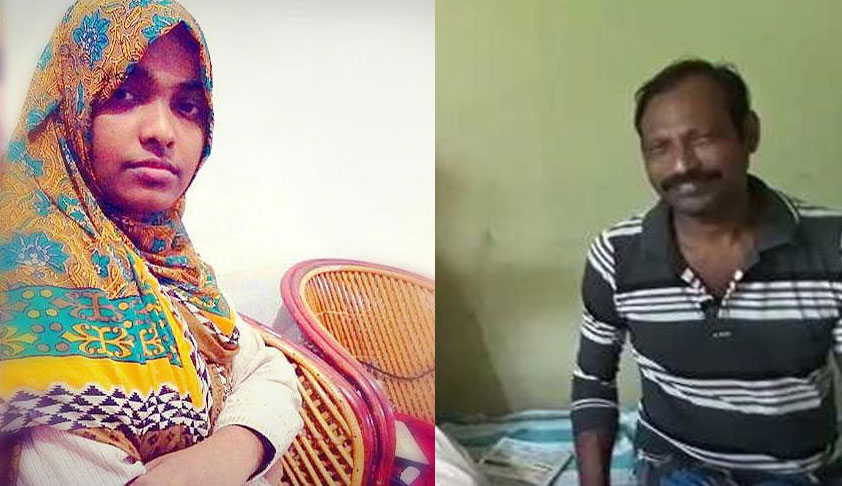 In another development in the Hadiya case, Mr. Asokan K.M., Hadiya(Akhila)’s father, has now approached the Supreme Court demanding “for ensuring security, well being and protection of his family”. He also demands that the investigation by the National Investigation Agency be permitted to be completed expeditiously.In the Application, Mr. Asokan makes references to several similar cases...

In another development in the Hadiya case, Mr. Asokan K.M., Hadiya(Akhila)’s father, has now approached the Supreme Court demanding “for ensuring security, well being and protection of his family”. He also demands that the investigation by the National Investigation Agency be permitted to be completed expeditiously.

In the Application, Mr. Asokan makes references to several similar cases of alleged conversion and demands an NIA probe into all such cases. He contends, “In the circumstances it is absolutely necessary, inter alia, as matter of national security and safety of citizens as also to prevent social unrest that the above cases be thoroughly investigated along with the case of Respondent No.1’s daughter and the perpetrators be brought to book.”

He has levelled allegations against the Popular Front of India/ Social Democratic Party of India (PFI/SDPI) as well, contending that the Women’s Wing of the organisation had “completely taken control of Akhila”. He further contends that the organisation has affiliation with several terrorist organisations and is involved in illegal and criminal activities.

Similar allegations have been made against Sainaba, who is the National President of the Women’s Wing of PFI, contending, “Her conduct in insisting on housing a complete stranger like Akhila, supporting her financially and otherwise taking responsibility for her by inter alia, arranging her so-called marriage with the Petitioner, raises serious disquiet about her intentions. Describes herself as “guardian” of Akhila.”

Mr. Asokan also highlights the criminal antecedents of Hadiya’s husband, Shafin Jahan, who has been charged with several offences such as those under Sections 143 (unlawful assembly), 147 (rioting), 341 (wrongful restraint) and 323 (voluntarily causing hurt) of the Indian Penal Code. He has also quoted Shafin’s Facebook posts to emphasise on him having extremist tendencies.

He, thereafter, alleges that Shafin and his affiliates are harassing his family “by fuelling unruly protests and creating law and order situations outside Respondent No.1’s home”. He has even alleged that several human rights activists have been engaged by Shafin, in order to create a perception in the media that he has placed his daughter under house arrest.

Indicating towards the incident being a bigger conspiracy than it seems on the face of it, Mr. Asokan submits, “The threats to Respondent No.1 continue and every few days, unruly, law and order situations are created outside his home and strangers are sent on the pretext of human rights violations. The said organisations which are backing the Petitioner have created an environment of intimidation and deep fear pyschosis. These intimidatory tactics have been employed in open court.

Desperate attempts are being made to derail the investigation and deflect attention from the real issue at hand which is the illegal, criminal and anti-national activities of PFI/SDPI and their affiliates. Activists are sent to create a “trial by media” and have tried to make a public spectacle of the family’s misery. A bogey is sought to be raised in the name of promoting a “multicultural society” when it is the PFI/SDPI who are the biggest threat to multi-cultural societies/communal harmony. The present case is on no account an ordinary inter religious marriage but rather, part of a well oiled, well funded systematic effort to wean away vulnerable women and make them pawns in a larger game.”

A Bench comprising Chief Justice J.S. Khehar and Justice D.Y. Chandrachud had thereafter directed the NIA and the Kerala Government to submit all documents related to the case. It had also directed Hadiya’s father Ashokan to submit proof of his claim that Hadiya was converted after being radicalized.

Hadiya’s husband, however, recently approached the Apex Court, seeking recall of the order directing NIA probe into the matter. He had filed an application contending that “certain facts have emerged which call for a reconsideration” of the order.

During the last hearing the  Hadiya case took an altogether new twist with the Supreme making it clear that a 24 year old girl, an adult, cannot be held hostage by her father against her wishes and the CJI Dipak Misra led bench categorically stating it will examine if a High Court under Article 226 can quash a marriage.

Kerala Government in its Affidavit filed before the Supreme Court, it is submitted that there is no scope for an investigation by National Investigation Agency(NIA) in the case.

The Supreme Court will consider the case tomorrow.