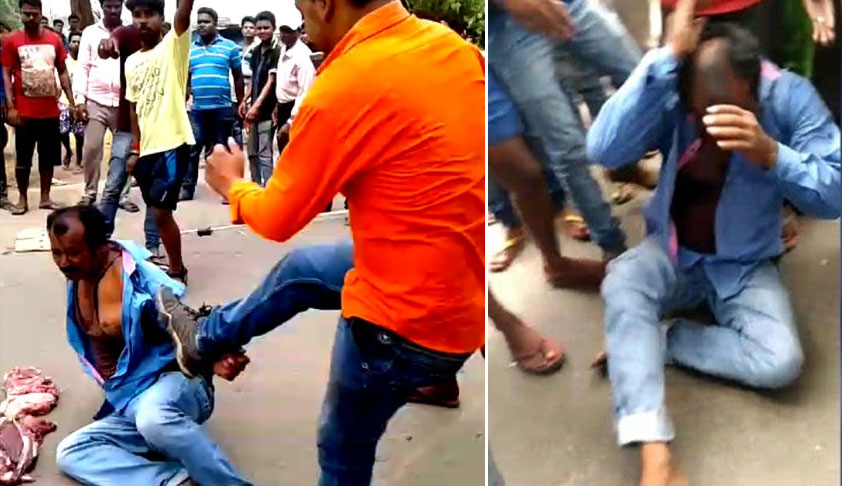 Precisely a year after the unfortunate Ramgarh lynching incident of 2017, the Jharkhand High Court on Friday suspended the life sentence awarded to 8 convicts including BJP leader Nityananda Mahto in the CaseOn March 21, A Fast Track Court had imposed life imprisonment on Mahto and 10 other cow vigilantes for the alleged lynching of the deceased, Alimuddin Akhtar, on June 29 last year...

Precisely a year after the unfortunate Ramgarh lynching incident of 2017, the Jharkhand High Court on Friday suspended the life sentence awarded to 8 convicts including BJP leader Nityananda Mahto in the Case

On March 21, A Fast Track Court had imposed life imprisonment on Mahto and 10 other cow vigilantes for the alleged lynching of the deceased, Alimuddin Akhtar, on June 29 last year for allegedly carrying cow meat in the Ramgarh District of Jharkhand.

The prosecution case was instituted on the basis of the FIR lodged by the wife of the deceased on June 29, 2017 wherein, she had stated that her husband had left for Ramgarh at about 8 AM from his village Manua. Two hours hence, she was informed that, in the Ramgarh bazar, twelve named accused persons, including these appellants, had assaulted her husband, dragging him out from a Maruti van, burning the vehicle. Her husband had died on the spot. In the FIR, she had stated that the accused persons could be identified in the photographs and videos.

On the same day, another FIR was lodged by the Officer-in-Charge of the Ramgarh Police Station, wherein he has claimed that at about 9:45 A.M., he was informed that one Maruti van carrying prohibited meat was put to fire by the mob.

Based on the said information, the Police Officer reached the place of occurrence at about 10 AM and found that the Maruti van had been put to fire. In two plastic bags, there was prohibited meat and some prohibited meat was also scattered here and there on the road. One person was found fallen down in injured condition, who disclosed his name as Md. Alimuddin. The injured person had also allegedly admitted that he was carrying the prohibited meat while the mob of unknown persons had waylaid them, put the Maruti van to fire and had assaulted them. On the basis of the self-statement of the Officer-in-Charge of Ramgarh Police Station, a case was instituted under Section 414 / 34 of the Indian Penal Code, Sections 12(2) and 12(3) of the Jharkhand Bovine Animal Prohibition of Slaughter Act and Sections 11(D) / 20 21 of the Prevention of Cruelty to Animals Act against the unknown.

“It is apparent from the evidence on the record that the informant, who is the wife of the deceased, is not the eye-witness to the occurrence. Some of the eye-witnesses have named some of the accused persons giving omnibus allegation that they had assaulted the deceased. Some photographs and one video that had become viral, is the source of identification of the appellants and this has been proved by P.W.-16, who is the I.O. of the case, during trial. It appears from the record that the video was displayed in the Court and she has identified all the appellants in the said video. From her evidence on record it appears that she has identified these appellants in the Court in the video, in which these appellants were only shown present in the mob. There is no allegation of any assault against them rather, the allegation of assault on the basis of video is specific against three other co-accused persons who are not the appellants before us. To cap all, it has come in the evidence of I.O., that the source of the video and photographs was not known to her...”, noted the Division Bench of the Jharkhand High Court.

“...it is only apparent that the appellants were the members of the mob, and in view of lack of evidence of specific assault against them, we are inclined to release the appellants on bail”, the bench directed Mahto and 7 others to be released on bail, during the pendency of the appeals, subject to the furnishing of bail bonds of Rs.10,000 with two sureties of the like amount each.