All Forms of Plastic, Including Plastic Articles Carried By Devotees in “Irumudikkettu", Banned in Sabarimala : Kerala HC [ Read Order] 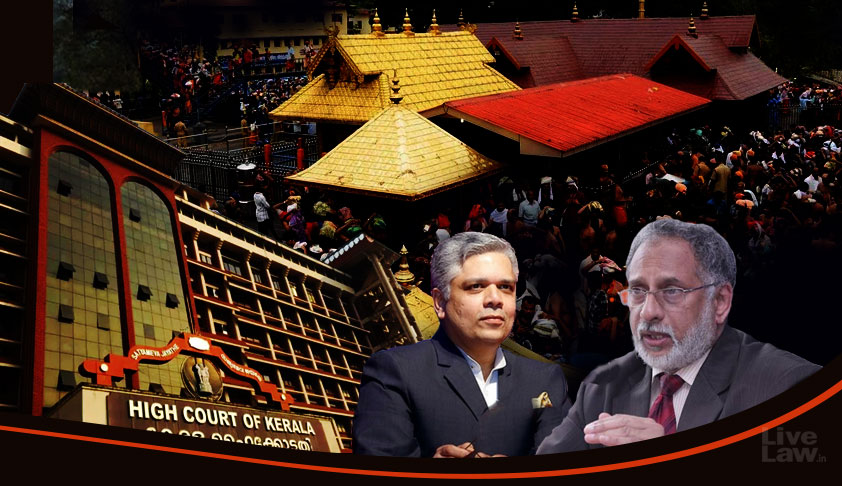 "We therefore, deem it essential and imperative to now order complete ban of plastic, in whatever manner and whatever form, be that bottles, sachets, wraps, covers, drinking straw or any other, including for carrying pooja articles in the “Irumudikkettu” and we direct the concerned authorities to ensure that plastic, in whichever form it be, do not find itself in and around Sabarimala at all", ordered the Court.

With the hallowed intention to prevent the ecological deterioration of Sabarimala, where the iconic temple of Lord Ayyappa is situated, the High Court of Kerala has passed a categorical order, preventing the use of all forms of plastic there, including plastic materials like sachets and covers wrapping the offerings customarily carried by devotees in their travel pouch called “irumudikkettu”. The order was passed by a division bench of Justice P R Ramachandra Menon and Justice Devan Ramachandran. The proceedings were initiated on the basis of a report filed by Special Commissioner appointed by the High Court for Sabarimala, which highlighted that plastic problem continued unabated in Sabarimala despite several orders passed by the Court.

The order penned by Justice Devan Ramachandran reflected the anguish of the court at the worrying level of pollution caused by indiscriminate plastic usage, and also its anxiety to preserve the sanctity and ecological balance of the area. The Court noted that Sabarimala was located in the buffer zone of Periyar Wild Life Sanctuary , which, apart from being an elephant reserve and a tiger reserve, is a “repository of rare, endemic and endangered flora and fauna and forms a major water shed of two most important rivers of Kerala, the Periyar and the Pampa”.

The Court noticed that the accumulation of plastic wastes  was posing an emergency to the delicate ecosystem of the area. The hilltop shrine attracts  50 to 60 million devotees annually. Specific reference was made to an unfortunate incident happened on 27.01.2018, where an elephant was reported to have died due to intestinal obstruction caused by inadvertent plastic ingestion. The post-mortem report of the hapless animal revealed large amounts of plastic in its stomach and intestinal tracts.

“The wild animals and elephants are clueless about what is food and what is not. They get attracted by the salty or sugary taste of food articles left inside these covers and containers and eat them as a whole. These animals are lured by the smell and taste of food and are virtually trapped into eating plastic, under the impression that it is food, leading to excruciatingly painful physical conditions and eventual death”, observed the Court.

Though the High Court had issued directions in the past to ban the use of the plastic, desired results were not be obtained . This had compelled the Court to issue an order in 2015 absolutely prohibiting use of plastic by devotees and traders. However, this was order was construed by the devotees and traders to be merely banning the use of plastic bottles and containers. As a result, plastic pollution continued to escalate.

The Special Commissioner reported before the Court that plastic articles like sachets and covers in which pooja offerings are carried by the devotees in “irumudikettu” also contributed to pollution. On the basis of opinion of the Thantri of the temple, the Special Commissioner categorised the five articles to be brought in by a devotee in the “irumudikkettu”, being :- i) coconut filled with ghee ii)betal leaf and arecanut iii)cash offering iv)turmeric powder to be offered to Nagarjun and v)raw rice, jiggery, avil and malar for “nivedyam”. Apart from that, a coconut meant to be broken at the holy eighteen steps have to be carried in the rear portion of “irumudikettu”.

The Court felt that an affirmative declaration that plastic is completely banned in and around Sabarimala was needed to resolve the issue, and hence ordered :

"We therefore, deem it essential and imperative to now order complete ban of plastic, in whatever manner and whatever form, be that bottles, sachets, wraps, covers,drinking straw or any other, including for carrying pooja articles in the “irumudikkettu” and we direct the concerned authorities to ensure that plastic, in whichever form it be, do not find itself in and around Sabarimala at all”

It was further directed that the Devaswom Board should ensure that  traders in and around Sabarimala, falling within the part of Wild Life Sanctuary and Tiger Reserve, should not “exhibit, sell or bring any food articles or such other articles in plastic covers or sachets”.

The directions were issued taking note of the “Beat Plastic Pollution” campaign of the United Nations Environmental Program against global plastic pollution, signified through this years environmental day tagline “If you cannot re-use it, refuse it”.

Further direction was issued to the authorities concerned to give wide publicity of the ban for the information of devotees coming from several parts of the country. The authorities were advised to implement the ban in “ a sensitive manner without causing any avoidable consternation to the devotee and without it being construed as a nuisance”. The ban will take effect from this year’s pilgrimage season.