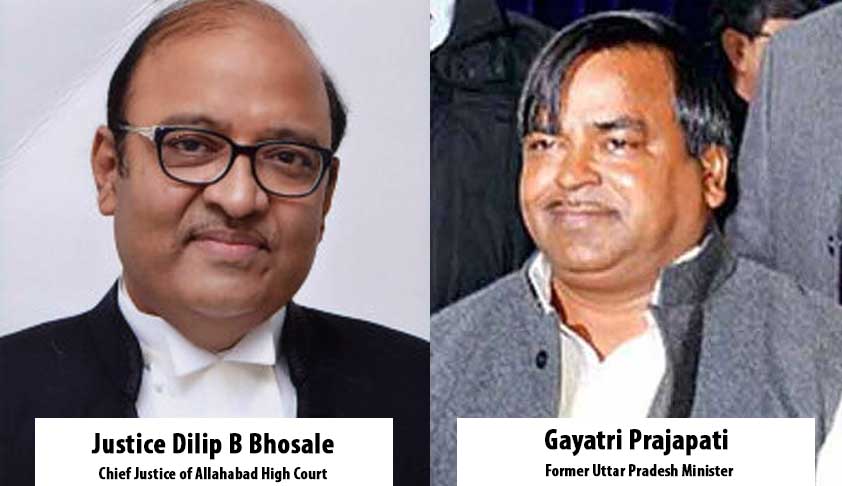 The Special Court Judge has granted bail to Gayatri Prajapati, who  is accused of allegedly raping a woman and attempting to rape her minor daughter. The UP Government has challenged the same before the Allahabad High Court and High Court has stayed the order.

Chief Justice Dilip B Bhosale in his order staying the bail order said,

"It is pertinent to note that on the very same day Additional District Government Counsel (ADGC) also filed an application for seeking atleast three days time for seeking instructions and to place their comments and case diary before the Court. It is pertinent to note that on this application, the learned Judge did not make any endorsement and he proceeded to hear the case on merits and enlarged the accused on bail. I would not like to make any comments at this stage on merits of the order passed by learned Judge. I may however observe that the manner in which the learned Judge has shown the haste in releasing the accused on bail ignoring the nature of offence allegedly committed by the respondent accused and the fact that the crime came to be registered against these accused by virtue of the order of the Supreme Court dated 17.2.2017, I have my reservations about the bonafides/intention of the Learned Judge who is about to retire on30.4.2017. This Court is also informed that insofar as accused No. 1 is concerned, he has not been released on bail in view of the fact that he is wanted in some other cases. So far as accused Nos. 2 and 3 are concerned, they have already been released on bail. It is also pertinent to note that the respondent-accused No.1 in his bail application has stated that no criminal cases are registered or pending against him which fact also prima facie does not appear to be true and correct. The applicants have placed on record the list of cases registered against respondent No.1-accused, at Annexure 12."