Allegations of Corruption against Justice C.R. Kumaraswamy who acquitted Jayalalithaa 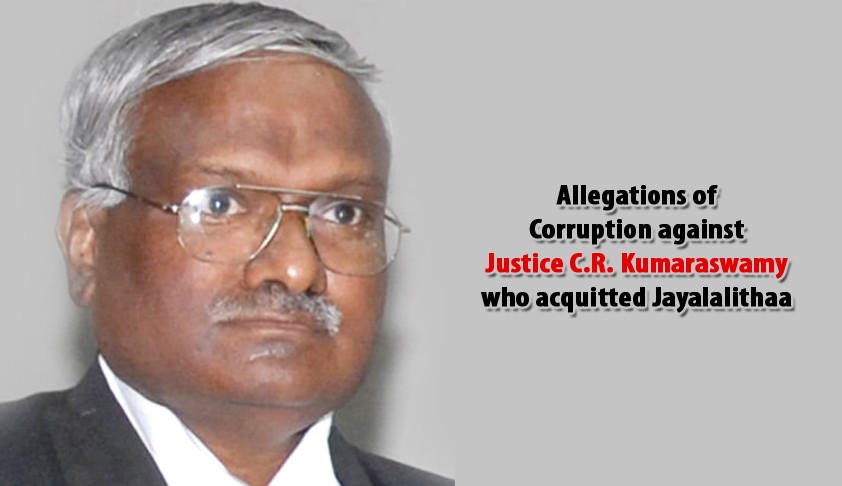 Justice C.R. Kumaraswamy, who acquitted Tamil Nadu Chief Minister J. Jayalalithaa in the disproportionate assets case recently, has reportedly been accused of acquiring property without following certain norms. The allegations have been leveled by Karnataka Brastachara Nirmoolana Vedike, a group of RTI activists and advocates working towards eradication of corruption in the State.They...

Justice C.R. Kumaraswamy, who acquitted Tamil Nadu Chief Minister J. Jayalalithaa in the disproportionate assets case recently, has reportedly been accused of acquiring property without following certain norms. The allegations have been leveled by Karnataka Brastachara Nirmoolana Vedike, a group of RTI activists and advocates working towards eradication of corruption in the State.

They have alleged that Justice Kumaraswamy had acquired properties in Bengaluru and Mysuru through Bangalore Development Authority (BDA), Karnataka Housing Board (KHB) and Karnataka State Judicial Employees Housing Society by violating certain norms in the site allotment rules and house building society bye-laws.

As per a Deccan Chronicle report, documents obtained under the Right to Information Act by Advocate A.R.S. Kumar reveal that Justice Kumaraswamy was allotted a flat No. 180, HIG B-3, First Floor, Block 100 in Kengeri 3rd stage by the Karnataka Housing Board in 1997 while he was serving as a district and sessions judge in Kolar. After this allotment, he submitted one more application to the board seeking allotment for a house under High Income Group (HIG) at Hootagally Colony in KHB Colony, Mysuru in 2001. While working as District and Sessions Judge in Bellary then, he got the Kengeri flat allotment cancelled and acquired the independent house in Hootagally Colony in Mysuru on exchange.

In the year 2005, Kumaraswamy's wife M.N. Nagarathnamma who had applied for a BDA site since 1987, in her 6th attempt got a plot measuring 30x40 allotted to her in Jnanabharathi Layout, Block 1 in Valagerahalli.

The group has alleged that in her application to the BDA, the Judge’s wife had concealed the facts about the allotment/cancellation of their Kengeri flat and acquisition of the independent house in Hootagally Colony in Mysuru by her husband.

In 2005, Justice Kumaraswamy had made a voluntary disclosure on the Karnataka High Court website, which disclosed his flat in Divya Manor Apartments on Venkataswamy Raju Road in Palace Guttahalli in Kumarapark West.

In May this year, Justice C.R. Kumaraswamy had allowed the appeals filed by Jayalalithaa and others and reversed the conviction ordered by the trial court. The Trial Court had convicted and sentenced Jayalalithaa and her 3 associates to four years in prison besides imposing a Rs 100 crore fine, on September 27 last year. You may read the judgment here.

The Karnataka Government had filed a 2700 page petition on 23rd June saying that the Karnataka High Court’s judgment was a “farce”, and that “arithmetical errors made the judgment illegal”. The petition has also added that the judgment had resulted in “the miscarriage of justice” and should be quashed. You may read the LiveLaw story here. You may read more news about Jayalalithaa’s DA Case here.

Justice Kumaraswamy was elevated as a judge of the High Court in 2005 from the cadre of district judges. He was made a permanent judge in March 2007. With his retirement, Karnataka High Court is reduced to 50% of its sanctioned strength. You may also read: 37% Judges posts vacant in 24 High Courts in India