[Alok Verma Case] CVC Has No Power To Seal The Office Of CBI Director And To Divest Him Of Duties : Kapil Sibal 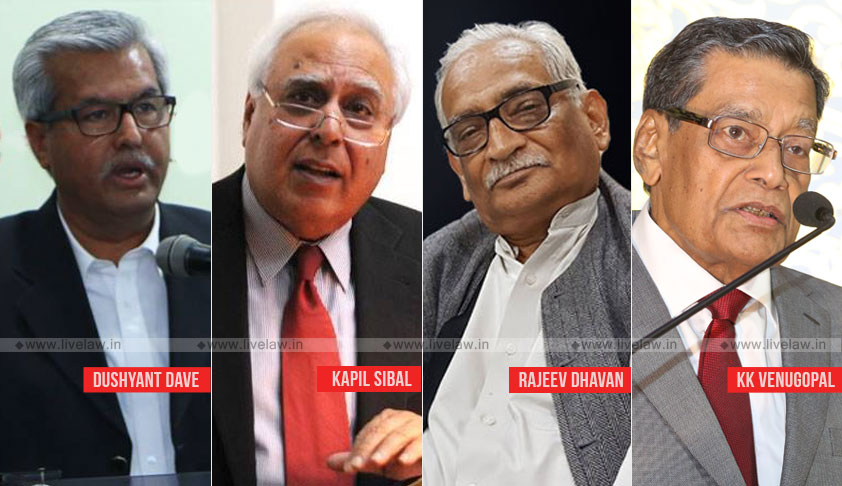 Senior Counsel Dushyant Dave, appearing for NGO Common Cause, sought a two fold relief- that the divestiture of Alok Kumar Verma of the charge of the CBI as well the appointment of Mr. M. Nageshwar Rao as the Interim Director be set aside.The Chief Justice required him to confine his arguments to the propriety of the move of sending Verma on leave without running it by the Selection...

Senior Counsel Dushyant Dave, appearing for NGO Common Cause, sought a two fold relief- that the divestiture of Alok Kumar Verma of the charge of the CBI as well the appointment of Mr. M. Nageshwar Rao as the Interim Director be set aside.

The Chief Justice required him to confine his arguments to the propriety of the move of sending Verma on leave without running it by the Selection Committee first.

“My fundamental submission, which is also accepted in administrative law, is that what cannot be done directly cannot even be done indirectly...In Vineet Narain, the scheme for according tenure guarantee to the CBI director was envisaged in an attempt to ‘deal with the structure, constitution and the permanent measures necessary for having a fair and impartial agency’ and to insulate ‘these agencies from any extraneous influence to ensure the continuance of the good work they have commenced’...”

“The CVC does not have any supervisory powers over the CBI in respect of its officers; its superintendence is confined to the investigations and prosecutions in corruption matters....In Vineet Narain, Lordships have said that the government shall remain answerable for the CBI’s functioning, that the Central government shall take measures to ensure that the CBI functions effectively and efficiently and that it is viewed as a non-partisan agency, and that Director Shall conduct regular appraisals of personnel to weed out the corrupt and the inefficient and maintain strict discipline within the organisation; the CVC is only required to review the cases taken up by the CBI for investigation, their progress and the filing of chargesheets, and the cases moved by the CBI for sanction for the prosecution of public servants...the same has been supplemented by the CVC Act...”

Insisting that in matters of discipline the CVC has no role to play, Mr. Dave relied on Nagaraj Shivarao Karjagi v. Syndicate Bank (1991) where the apex court had quashed the compulsory retirement of a Manager in a branch of the respondent-Bank, imposed by way of punishment on the recommendation of the Commission.

“Section 4B of the DSPE Act uses the phrase ‘Terms and Conditions of Service of the Director’. What the Parliament intended was that the guarantee of the tenure of the Director was to be secured by the power of the Selection Committee. Suppose he is involved in a corruption case and has to be transferred, then also the consent of the Selection committee has to be sought...”

He indicated a 1978 Supreme Court ruling in so far as it notes that “to carry out effectually the object of a Statute, it must be construed as to defeat all attempts to do, or avoid doing, in an indirect or circuitous manner that which it has prohibited or enjoined".

"In another verdict rendered in 2001, the apex court has observed that “when a statute vests certain power in an authority to be exercised in a particular manner then the said authority has to exercise it only in the manner provided in the statute itself”.

“The Selection Committee has alone been entrusted with the power of transfer both by SC Judgments and the statute...this is like the Vishaka case where the Parliament recognized that this court had acted in the interest of the rule of law and introduced a legislation to give effect to its directions....”

“If the rule of law is to be upheld, the impugned orders must be declared void ab initio and be set aside”, he signed off.

Next, Senior Advocate Kapil Sibal, representing Congress leader Mallikarjun Kharje, argued that the CVC could not have passed the impugned order under clauses (a) and (b) of section 8(1) of the CVC Act of 2003 as these provisions only grant the Commission a limited power of superintendence over the CBI in investigations under the Prevention of Corruption Act. Further, section 4(1) of the DSPE Act also restricts the scope of CVC’s superintendence to specific investigations.

“To seal his office and to not allow him to function is outside the ambit of the power of the CVC. The order relates to his conduct as the Director of the CBI”, he submitted.

“The DoPT also could not have passed its order under section 4(2) of the DSPE Act on a consideration of the CVC recommendation and the allegations of corruption. Neither the CVC nor the government can override sections 4A and 4B (of the DSPE)”, pressed Mr. Sibal.

“Your Lordships have held that the power to appoint, for the purpose of the General Clauses Act, also includes the power to suspend...like Your Lordships asked, if one is caught red-handed accepting a bribe, it can’t be that there is no remedy, but that remedy must also follow a procedure. The power of appointment is in the Selection committee, so the power to do away with that appointment must also be in that Committee. Otherwise what happens to the independence of the CBI, or even the CVC, the CAG or the Election Commissioner? Today, this has transpired with the CBI, tomorrow, the Central Vigilance Commissioner may have to face a similar situation. The process for the removal of the Central Vigilance Commissioner under Section 6 of the CVC Act is more or less the same...”

He, however, differed from Mr. Fali S. Nariman on that where there are clear statutory provisions, the government could not have moved the court to seek permission for Verma’s divestiture.

“Don’t bring in the CVC. We are not going into all this. We are only on the question of law”, repeated the Chief Justice.

“For all tenured posts, be it the Union Public Service Commissioner or the CAG, there is a procedure in place. But here the decision was taken at the level of the executive, without following the prescribed procedure, and by a entity not empowered to take that decision. The Independence of the institution has been compromised. If they wanted to appoint a pro-tem Director, even that should have gone through the Selection committee...”, Mr. Sibal continued.

“Are you advancing a proposition that a reference to the Selection Committee is an absolute necessity with no exceptions? that the director cannot be touched, suspended or replaced by any governmental order, regardless of how compelling the circumstances may be?”, inquired Chief Justice Gogoi.

The Senior Counsel and Congress MP replied in the affirmative.

“Yes, all circumstances! The provision (section 4B of the DSPE Act) speaks of ‘Previous consent’, Not even just consent! You cannot go to the committee later! There cannot be a post-decisional hearing!”, added Mr. Nariman.

“The usage of term ‘Superintendence’ in criminal law goes back to the (Police Act of) 1861 and is different from its connotation in service law. In the 1980 Saldanha case, it was interpreted as the power of the state government to direct further investigation under the Cr. P. C...this has become a term of art...”

“The word is now repeated in the DSPE and the CVC Acts...Section 4(2) (of the DSPE Act) vests in the Central government the power of superintendence over the CBI in respect of administrative matters. When you connect it with the other contents of the act, this general power under 4(2) would yield to the specific provision in 4B. Any power anywhere relating to the conditions of service is obviated by the non-obstante clause in 4B. Even the All-India Service rules are taken care of and cannot override the mandate of the two-year term...the purpose of this entire exercise, including two-year tenure and the restriction on transfer, is the autonomy of the CBI director. If it is can be whittled away, then there is something unsound about the purposive interpretation accorded to the Act!”

Dr. Dhawan suggested that the meaning of ‘superintendence’ in sections 8(1)(a) and 8(1)(h) of the CVC Act is pari materia to section 4A of the DSPE Act and the Police Act of 1861.

“Suppose there is no such power, then who fills the lacuna in the Act? Neither the Central government nor the CVC. Casus Omissus is not permitted to the administration. Only Your Lordships can plug that gap. But not now, because when the power was exercised, it did not even exist under any of the provisions facilitating ‘superintendence’”, he claimed.

“One of the facts of the long night (on which the CVC and Central government orders divesting Verma of the charge of the CBI and appointing Rao as the interim Director were passed) is that people carrying out investigations were transferred...If Your Lordships ask whether questions of investigation are involved, the answer would be ‘yes’.

“Your plea challenges your transfer and seeks a SIT into the FIR (against Asthana). how does this substantiate your locus to be heard on the issue here?”, posed Chief Justice Gogoi.

“My transfer is imbricated in the fact that the Director was removed”, replied Dr. Dhawan.

“So you are saying that if the Director had not been removed, you would not have been transferred?”, pressed the Chief Justice.

“No, no, no...if the Director had not been removed, I would have continued my investigation...but if Your Lordships are only on the issue of the empowerment (to issue the impugned orders) and not on merits, then I am only here to assist you...”, articulated the Senior Counsel.

Finally, Senior Advocate Indira Jaising, appearing for CBI DIG Manish Sinha, who was supervising the work of investigation into the FIR against Asthana before his allegedly-unceremonious transfer, prayed that her application be kept pending until the outcome of the present proceedings

“There have been as many as 10 transfers in connection with the said FIR. I have been transferred from Delhi to Nagpur and de facto, removed from the investigation...There was a genuine apprehension that everyone on it could be victimised. We are here to seek your protection against being transposed from an investigating officer to an accused...”, she pleaded.

“We are not debating these questions at the moment”, reflected the CJI.