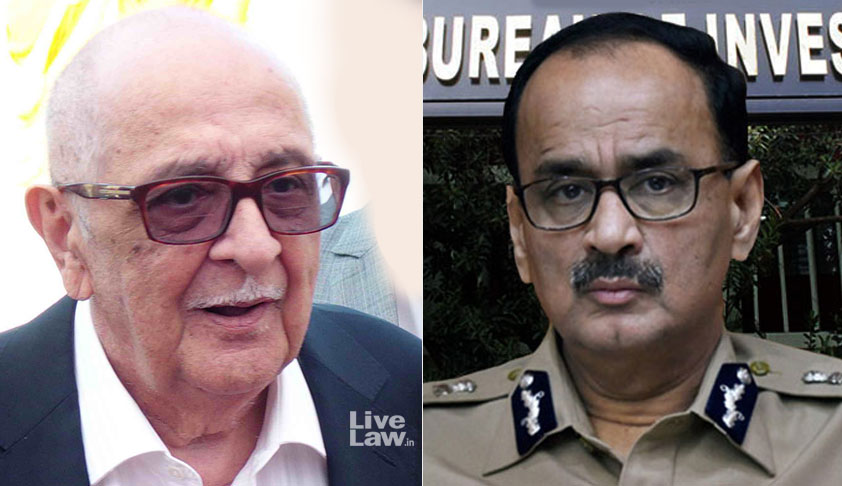 As the hearing on CBI Director Alok Kumar Verma’s challenge to the October 23 orders of the CVC and the Central government divesting him of his powers and responsibilities commenced in the Supreme Court on Thursday, Senior Advocate Fali S. Nariman drew the bench’s attention to the apex court’s judgment in the Jain Hawala case (1997), the scheme of the CVC Act of 2003 and the...

As the hearing on CBI Director Alok Kumar Verma’s challenge to the October 23 orders of the CVC and the Central government divesting him of his powers and responsibilities commenced in the Supreme Court on Thursday, Senior Advocate Fali S. Nariman drew the bench’s attention to the apex court’s judgment in the Jain Hawala case (1997), the scheme of the CVC Act of 2003 and the consequential amendments in the Delhi Special Police Establishments Act of 1946.

In the Vineet Narain case, it was envisaged that the CVC shall be entrusted with the responsibility of superintendence over the CBI's functioning; that the Director, CBI shall have a minimum tenure of two years, regardless of the date of his superannuation, and that the transfer of an incumbent Director, in an extraordinary situation, including the need for him to take up a more important assignment, should have the approval of the Selection Committee, which was supposed to be headed by the Central Vigilance Commissioner, with the Home Secretary and Secretary (Personnel) as members.

“This was subsequently incorporated into the law with the introduction of the CVC Act of 2003, which amended the DSPE Act by inserting sections 4A and 4B. While the former required the Central government to appoint the CBI Director on the recommendation of a Committee of which the Central Vigilance Commissioner was to be the Chairman, the latter secured a minimum tenure of 2 years to the Director, even his transfer requiring the previous consent of the Committee....section 4A was further amended in 2013 by the Lokpal and Lokayukta Act, which changed the composition of the Selection Committee to comprise of the Prime Minister as the chairman and members the leader of the opposition in the Lok Sabha and the Chief Justice of India....”

“Further, where there is no leader of the opposition, then the leader of the single largest party in opposition in the Lok Sabha is deemed to be a part of the Committee”, he continued.

“My client was appointed as the CBI Director on February 1, 2017 after consultation with this committee. The position in law is that it is a post of fixed tenure, the appointment to which is made in consultation with the highest authorities in the land. The incumbent cannot be transferred, even if it is a transfer with benefits, without the consent of this committee!”

“This committee was not consulted by the CVC or the central government. He is not transferred, but divested of his powers, though in spirit it is the same thing. In limine, there is no basis for such an order because the legislature has taken the care his tenure. If something goes wrong, you can go to the committee. But this cannot be done on an ex post facto basis where you first have to renounce your post and then you challenge....there is a need for the CVC Act to be construed strictly as, by way of the two-year tenure and the restriction on transfer, the objective was to insulate the Director against extraneous influences, as contemplated by Your Lordships in Vineet Narain!”, advanced Mr. Nariman.

“It is not that he cannot be transferred....only the consent of the Selection Committee is required if there is a proposal to clip his wings, which, in this case, it was....the CVC in its impugned order has divested My client of his powers during the pendency of the inquiry into the allegations against him and the counter allegations. But this inquiry was not an open-ended one, with Your Lordships having stipulated a two week deadline in your order of October 26....”

“Suppose an incumbent is caught red handed accepting a bribe, should the Committee be first moved before proceeding against him? Should such an officer be allowed to continue even for another minute?”, inquired Justice K. M. Joseph.

“The order cannot stand in the absence of their seeking the requisite permission. A transfer is only the making over of one’s rights and responsibilities to another. Even if they go by technicality to say that the committee is to be involved only for the transfer, then they should have come to the court! They cannot go to the Legislature....”, asserted Mr. Nariman.

Next, Justice Joseph quizzed the veteran lawyer on Article 317(2) empowering the President of India to suspend the Chairman of the UPSC if a reference in this behalf is made to the Supreme Court.

Insisting that though this was not contemplated in Vineet Narain, the condition precedent for the removal of the official is a reference against him.

Thereupon, Chief Justice Ranjan Gogoi directed Senior Counsel Dushyant Dave to commence his submissions, curtailing them on the point of deference to the Selection Committee in sending Verma on leave.

At the beginning of the hearing on Thursday, Mr. Nariman also urged the bench to consider at leisure the 2012 Constitution bench judgment of the apex court, under the Chief Justice-ship of Justice S. H. Kapadia, in Sahara India Real Estate v. SEBI for the postponement of publication of any matter if the interest of justice so demands.

“The view taken in the 2012 judgment was that publication cannot be restricted altogether, but can be postponed under Article 19(2). There has to be a circular or a rule whether a matter which only been filed before the Registrar but has not come before any bench can be published....”, Mr. Nariman had submitted.