In Another First, Justice Karnan Directs CBI To Investigate SC Judges Who Issued Warrant Against Him 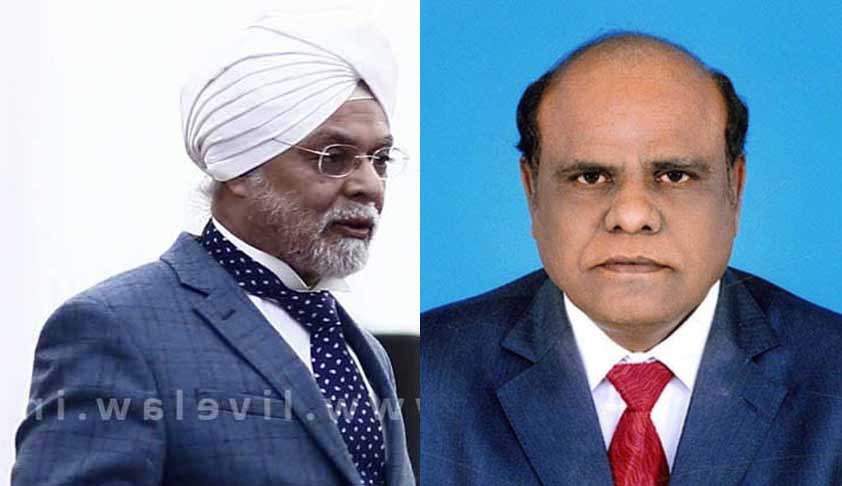 After a seven Judge Bench of the Supreme Court headed by the CJI issued a bailable warrant against Calcutta High Court Judge Justice Karnan, the latter has now reportedly passed an order directing the Central Bureau of Investigation to investigate and file a report against all the seven Judges and Attorney General Mukul Rohatgi.“Yes, this has never happened before just like the SC order...

After a seven Judge Bench of the Supreme Court headed by the CJI issued a bailable warrant against Calcutta High Court Judge Justice Karnan, the latter has now reportedly passed an order directing the Central Bureau of Investigation to investigate and file a report against all the seven Judges and Attorney General Mukul Rohatgi.

“Yes, this has never happened before just like the SC order which issued bailable warrant against me. It is all happening after the current government has come to power and the lower class is being further oppressed and suppressed,” Justice Karnan was quoted as saying.

“This order has been passed by me to prevent abuse of any court. I have invoked my inherent power under Section 482 of the Criminal Procedure Code and Article 226 of the Indian Constitution. There will be inquiry to see that if they have violated the provisions of not only SC & ST (Prevention of Atrocities) Act, 1989 but also the Indian Penal Code,” he added.

He has further directed the Secretary General of Lok Sabha to place the entire facts of the case before the Speaker of the Lok Sabha, so that inquiry under the Judges Inquiry Act can be initiated, and proceedings of impeachment against the SC judges can be carried out. He has also “requested” the President to stay the warrant, and has maintained the claim that he was being singularly targeted by the higher judiciary for being a Dalit.

“Learned Senior Advocate Shanthi Bhushan had filed an affidavit before the SC stating that nine former Chief Justices of the SC were guilty of corruption, but the affidavit is still pending and no contempt action against her. Why? Because he belongs to the upper caste. They are doing this to ruin my life and career,” he was further quoted as saying.

He went on to give another instance, when a month ago, an Advocates Association gave a press statement that a Judge of the Karnataka High Court, Justice Xxxxxxx was paid Rs 200 crores for passing a favourable verdict in the Jayalalithaa case. He questioned the lack of a contempt order against the Association.

The warrant was issued against the Judge for his failure to appear before the Bench hearing suo-motu contempt proceedings against him, for openly accusing Judges of corruption. The Court had taken into account the letters circulated by the Judge earlier this year, making serious allegations against Supreme Court and High Court Judges. In one of the letters addressed to the PM Modi, he had alleged that some illegal money had been recovered from some High Court Judges after demonetization. He had also alleged corruption against twenty High Court Judges.

The Court had, in February, deferred the hearing of the case after he had failed to appear before the Bench.  Referring to the letter written by Justice Karnan to the Apex Court, Attorney General Mukul Rohatgi had said that “it only aggravated the issue as there are many more grave allegations.” The Court was, however, of the view that another opportunity should be given to the Judge. The matter has now been posted on 31st March.

Not unknown to controversies

In November 2011, Justice Karnan had alleged that a few High Court Judges had humiliated him on the basis of his caste. He had alleged that Dalit Judges were targeted, and that their reputation was tainted whenever they proclaimed their self respect.

Fast forward to January, 2014, he entered the Courtroom where a Special Bench was hearing a PIL against the proposed appointment of new Judges, and alleged that the selection was unfair. He had also expressed his desire to file an affidavit in his name, saying that he was also a part of the Judiciary. Later, he abruptly exited the courtroom.

Later, in May, 2015, Justice Karnan had passed another order requesting the then Chief Justice to extend co-operation “without any interference with Court’s proceedings and its Judicial Power in order to maintain the decorum of the Court and avoid an unhealthy practice of Judiciary in the interest of the general public”. He had also requested the Chief Justice to avoid ego clashes and abstain from acting in an autocratic manner to protect the democracy. He had order further requested the Chief Justice to not “interfere” in the case, “failing which, this Court will initiate contempt of Court Proceedings” against the Chief Justice. This order was later stayed by the Supreme Court, in a suo motu writ proceeding.

In another letter written to the Chief Justice of India, he had criticized the collegium system. The Collegium system, according to Justice Karnan, “acted on its own views or whims and fancies to say the least” which “disturbs” both his mind and “Judicial work”. In the letter, he had praised the government’s move to constitute the National Judicial Appointment Commission (NJAC), and had said that it was “most appropriate for the functioning of the judiciary in an unfettered manner and to render justice.” You may read the LiveLaw article here.