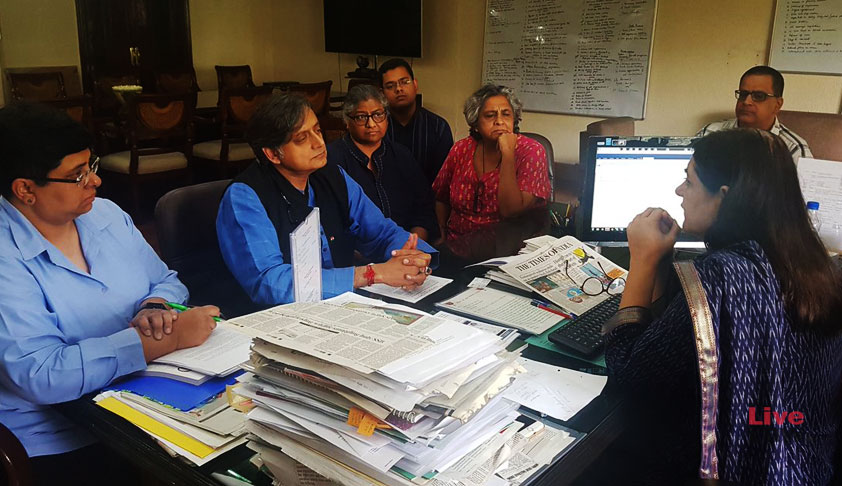 He was accompanied by Ms. Anjali Gopalan, the Director of the Naz Foundation, Ms. Meena Seshu, the General Secretary of SANGRAM and Ms. Aarti Pai, member of the National Network of Sex Workers. During the meet, he presented Ms. Gandhi with a petition consisting of comments from 30 civil society organizations, 247 activists & lawyers, with the endorsement of over 4,000 sex workers across the country.

The Petition primarily asserts that while trafficking must be dealt with strongly, the law must not victimise or target adult consenting workers, especially sex workers, stating, “One of the most vulnerable sections that will be adversely impacted by the Bill are adult sex workers. The fundamental flaw with the Bill is that it treats victims of human trafficking on par with adult persons in sex work. Trafficking of persons into forced or coerced labour (including sexual exploitation) should not be equated with sex work undertaken by consenting adults. This conflation could lead to misuse and over-broad application of the provisions in this bill.”

Essentially, Dr. Tharoor claims that the current approach would lead to incarceration and targeting of people voluntarily earning their livelihoods through means deemed immoral by the State. The petition explains, “The harmful impact of assuming all forced workers as trafficked victims will result in the ‘forced rescue’ of adults earning a livelihood and incarcerated in ‘Sudhar gruhas’ be they domestic workers, bonded labourers, beggars, sex workers or surrogate mothers.”

Petition says that much like the Bill in its current form, all measures to deal with trafficking focus on the victims rather than the perpetrators of the crime. This involves focus of surveillance on victims who are later picked in the hope of catching the traffickers. He further states that while the Bill proposes to send victims of trafficking to rehabilitation homes, sufficient safeguards must be incorporated therein to ensure that only consenting adults are sent to such homes. He further demands provisions for regular periodic reviews and checks, claiming that many of these homes often turn into places of torture and abuse.

Furthermore, the petition highlights several provisions of the Bill that discourage victims from approaching law enforcement agencies or cooperating with them, stating, “Police fear makes it difficult for workers to report violations and other crimes by perpetrators who carry out violence with impunity. Besides, legal constructions of sexual services as exploitation contribute to a climate of stigma and scorn towards persons in sex work and the work itself, thus endorsing State violence and discrimination.”

The petition laments the fact that victims are burdened with leading the police to the trafficker and when this method does not pay dividends, they face the wrath of the police and law enforcement. Besides, he also condemns the ‘raids to rescue’ model, whereby law enforcement swoops in and uses the police to ‘pick up’ victims, stating, “The mode of raids by police and anti-human-trafficking units to rescue trafficked victims further traumatises victims who have no clue why they are being rescued.”

Thereafter, the petition acknowledges that as per Section 370 of the Indian Penal Code, “consent of the victim if immaterial in the determination of the offence of trafficking”, but asserts that this is often interpreted as a loss of consent over a livelihood choice, especially in the case of sex work and surrogate mothers.

Besides, Dr. Tharoor also opines that the Ministry must rethink the present institutional method of rehabilitation, citing a study which shows that 77% of women who were released from rehabilitation homes, returned to sex work.

He therefore calls on Ms. Gandhi to undertake a wider consultation with all stakeholders on the Trafficking Bill before it is introduced in the Parliament.

Read the Letter and Comments Here