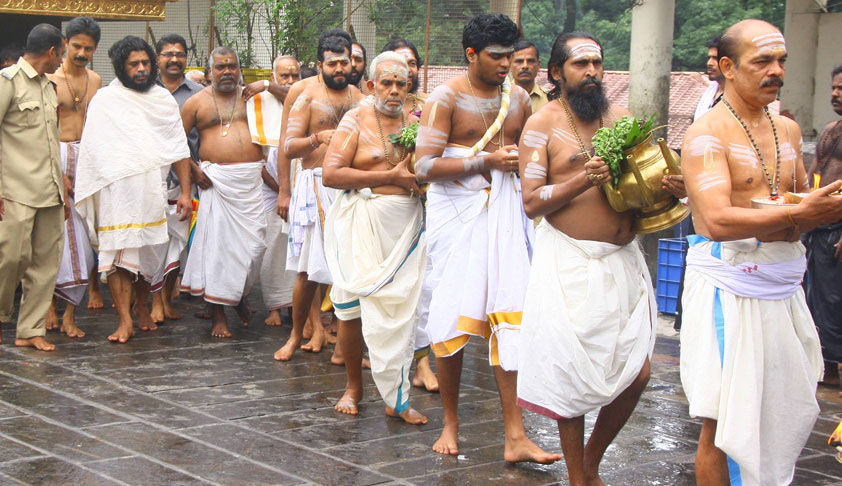 In the year 1930, Dr. Ambedkar launched his temple entry movement in Nasik (Maharashtra). The Depressed Classes in Nasik informed the trustees of the famous Kalaram Temple that they would launch satyagraha if the trustees did not throw the temple open to the Untouchables before a particular date. The temple entry satyagraha was an initial symbolic move towards social equality and saw...

In the year 1930, Dr. Ambedkar launched his temple entry movement in Nasik (Maharashtra). The Depressed Classes in Nasik informed the trustees of the famous Kalaram Temple that they would launch satyagraha if the trustees did not throw the temple open to the Untouchables before a particular date. The temple entry satyagraha was an initial symbolic move towards social equality and saw resistance from high caste Hindus.

After Independence, the Dalits, who account for around 16% of total population, struggled to get appointed as priests in temples. In 2002, the Supreme Court ruled that eligibility for priesthood should be the knowledge of rites and traditions, and not caste, thereby opening the door for the backward and oppressed castes to stake their claims. On the basis of this, the Kerala government had issued directions to all state-run Devaswom boards (temple boards) to carry out their recruitment process without discrimination on the basis of caste and had subsequently left the appointment of priests to the State Public Service Commission. However, even after the Supreme Court judgment, the temples — including many under the control of the state-run Devaswom boards — were unwilling to appoint non-Brahmins as priests, even though there was shortage of Brahmin priests.

In a rare instance, the Kerala Devaswom Recruitment Board has now recommended the appointment of 36 non-Brahmins, including six Dalits/Scheduled Castes (SCs), as priests in temples coming under the board. The appointment list has been prepared after conducting the written test and interview. This is the first time in history that the appointment of temple priests in Kerala is being done on the basis of reservation norms that exist in the recruitment of government staff. Currently in Kerala, the total reservation for SC/ST (Scheduled Tribe) and OBC (Other Backward Classes) categories is 32%.

The move is also unique because of the fact that there have previously been some priests from backward communities who made it to the list through merit. It is the first time that an affirmative action has been implemented.

The Indian experiment with an affirmative action is the world’s oldest. Madhav Khosla, author of a leading book on the Indian Constitution, states that India’s founding fathers had a good reason for putting asymmetry into the Constitution, for the reason that the inequality was so pervasive that it would have been absurd to say the law must treat everyone equally. Facial neutrality was thought to have continued the structure of inequality. An affirmative action in India in the form of reservation has attempted to provide them with representation in the government sector. For example, Dalits had just 1.6% of the most senior (Group A) civil servant positions in 1965, which rose to 11.5% by 2011.

However, the reservations have never been implemented completely in spirit, which was equality. In his work “Social Justice Through Affirmative Action in India: An Assessment” (2012), Ashwini Deshpande highlights:

“At the higher levels or promotion stages, formal and informal procedures had operated to keep out the SCs, such as ad hoc and temporary positions, elimination through personal evaluation procedures like interviews, personality tests and unfair adverse entries in confidential records. As one goes down the hierarchy, the representation of SC-ST increases, with as many as 80 percent of the cleaners being SC in 2007. Overall, the Group D category has always had more SCs than their share in the population, even excluding sweepers. This suggests that within government, all the low-paid and low-skill jobs are dominated by SCs. In all the opposition to affirmative action, there is never any protest against over- representation of low castes in low paying jobs. In other words, as long as Dalits don’t compete in traditional upper caste bastions or “stay where they belong”, it is obviously considered acceptable.”

Another aspect of affirmative action in the government sector is that very few Indians have formal jobs, let alone government jobs. As pointed out by Harsh Shrivastava of the World Development Forum, a think-tank based in Delhi, “the [jobs] policy only matters for perhaps 2% of the Indian work force”. In fact, in the government sector, jobs have been shrinking since 1991, after the liberalisation policy. From 2006 to 2012, there has been a 3.3 per cent decline in the number of jobs available in the government sector. Whereas in the same period, there has been a 35.7 per cent increase in the private sector. The demands for reservation in private sector have not been new. In 2004, then Prime Minister Dr. Manmohan Singh had favoured ‘voluntary action’ by the corporate sector in providing reservations in jobs for weaker sections even as he asserted that quota in private sector was unavoidable. He had also stated that it was time companies acknowledged the value of diversity and broadbased their workforce. The action is yet to be initiated.

Coming back to the issue of affirmative action in appointment of priests in temples, it might be considered a progressive step. While this is being welcomed from several quarters, I am reminded of what Dr. Ambedkar had categorically said in a letter dated 3-3-1934 to a colleague, Bhaurao:

Dr. Ambedkar was convinced that the depressed classes need to make progress in the economic, educational and political fields. To quote from his press statement on February 14, 1933:

“.. the Depressed Classes think that the surest way for their elevation lies in higher education, higher employment and better ways of earning a living.”

Appointing Dalits as temple priests is a small step towards giving them equal recognition and a respect for human dignity. But their problem is comprehensive.

In 2012, a report in The Hindu stated that half of SC/ST teaching posts are unfilled in Central universities. In the same year, it was found that leading Indian universities such Jawaharlal Nehru University (JNU), Delhi University (DU), Banaras Hindu University (BHU) and Allahabad University, all of them directly under the HRD ministry, do not have a single SC/ST professor despite the policy of reservation in promotions. Moreover, DU and JNU did not have a single SC/ST associate professor (reader). BHU has three SC associate professors, not one from the ST category, and 112 SC and 30 ST assistant professors (lecturers), the entry-level post.

Promotions have intentionally been denied to candidates from SC or ST communities in academia. There have been very few IAS officers from SC/ST in the highest echelons of policy-making. The National Commission to Review the working of the Constitution (NCRWC) in 2002, headed by former CJI Justice MN Venkatachalaih, stated: “Over 50 years of the progress of education, however tardy, has certainly adequate number of persons of the SC, ST and OBC in every state who possess the required qualification having necessary, integrity, character and acumen required for judges of Supreme Court and High Court for appointment as Judge of the superior judiciary.” Only four Scheduled Caste judges have been elevated to the Supreme Court till date. Since the retirement of Justice KG Balakrishnan in 2010, there has been no Scheduled Caste judge in the Supreme Court. None of the current high court chief justices belong to the Scheduled Caste.

Therefore, the issues of Dalits, Tribals and Backward Classes, are still mainly political, social, economic, and educational. The state, the private sector and the society must fulfil its duty in providing representation to the underprivileged sections in the areas in which it is needed the most, i.e., education, jobs, judiciary, politics, etc. Appointment as temple priests is not enough and not the ultimate need. Reservations once accepted in the constitutional framework are not charity. These are the constitutional guarantees, which must be fulfilled.

Anurag Bhaskar is an alumnus of Dr. Ram Manohar Lohiya National Law University, Lucknow. He can be contacted at [email protected] and tweets at @anuragbhaskar_

[The opinions expressed in this article are the personal opinions of the author. The facts and opinions appearing in the article do not reflect the views of LiveLaw and LiveLaw does not assume any responsibility or liability for the same].
TagsDalits Devaswom boards Kalaram Temple Kerala Devaswom Recruitment Board Temple Priests
Next Story
Similar Posts
+ View more
Law Firms
+ More