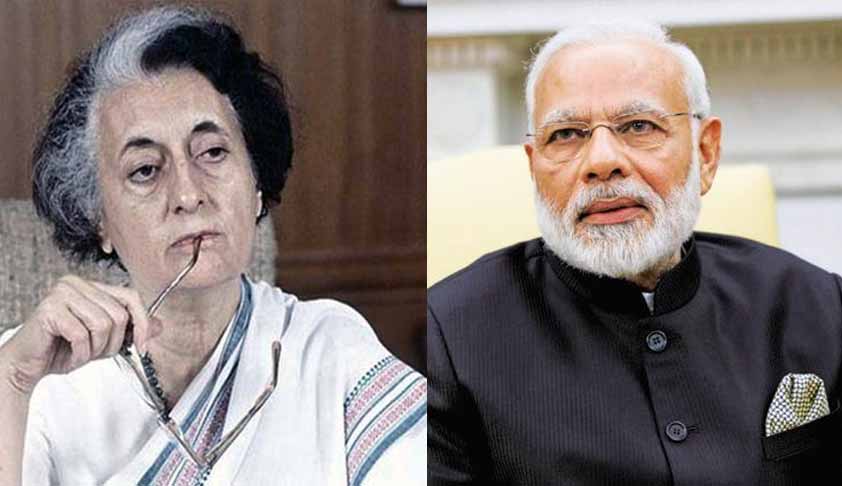 April 26th is proving to be a black day of Indian Judiciary once again. The Central Government has today, unabashedly returned the collegium recommendation for the elevation of Chief Justice of Uttarakhand High Court, Justice K.M.Joseph to the Supreme Court. The collegium had recommended the names of Justice K.M.Joseph and Adv.Indu Malhotra for appointment as Supreme Court judges; the...

Forty five years back, it was on the same day April 26th, that Supreme Court (SC) of India, for the first time, saw a shift from a tradition that existed since its inception, the tradition of senior most Judge of the Supreme Court becoming the next Chief Justice of India (CJI). Nobody in the legal profession can ever forget the historic events of April 26th, 1973. The then Congress government led by Mrs. Indira Gandhi had superseded the senior most Judge of the SC i.e. Justice Hegde and chosen a junior judge Justice A.N. Ray as the CJI. Since the Indian Constitution is silent regarding the criteria for appointing the CJI, the convention has been of the senior most judge being given that position.  Many termed this supersession as the ‘Black Day’ of the Indian Judiciary. The government however, justified Justice Ray’s appointment by saying that he could bring an end to the confrontation between the Judiciary and the Government. The reply by Justice Ray on accepting the appointment was ‘if I did not accept the appointment any other junior judge would have, I did not hanker for it’. Many scholars say, that the acceptance by Justice Ray costed him respect of many in the profession, namely Former CJI Hidayatullah who refused to attend Ray’s swearing-in ceremony.

The Second supersession came in 1977 when Justice H.R. Khanna was superseded by Justice Beg. Justice H.R.Khanna even today is considered to be one of the finest judges to ever serve the Court. Famous author Khushwant Singh described him once as, ‘so clean a man that he makes angels look disheveled and dirty’. In his autobiography, Justice Khanna recalls the reason he believed he was superseded. He states that the moment he rendered his dissent in the infamous ADM Jabalpur case (the case that held a citizen does not have fundamental rights during the proclamation of an emergency), he knew he would be superseded. He further recalled that since his dissent, the attitude of the government changed towards him. He was denied invites to official dinners and other similar events by Mrs. Gandhi and was then later superseded by Justice Beg on the ground that Khanna’s tenure would have been too short. Prof. Baxi recalling the incident writes, ‘that after the supersession, there were clear indications that the brother justices did not accept the leadership of CJ Beg. The Court almost ceased to be an institution and became an assembly of individual judges’.

It is believed that the architect behind all these supersessions was not the Law Minister but the Minister of Steel, Kumarmangalam, who was the key advisor to Mrs. Gandhi. Scholars have coined the term ‘Kumarmangalam doctrine’ to explain this ideology of the government to populate the court with judges who were believed to be supportive of government policies.

However, interestingly as against the popular opinion, the above was not the first attempts of supersession by the Central government. Prof. Godbois, a leading scholar on the legal history of the Indian Supreme Court in his book ‘the Judges of the Supreme Court’ discusses that after independence there was a tussle going on between Pt. Nehru and the Apex Court. While Nehru tried to bring in socially welfare legislation, the Court used to strike them down for violation of fundamental rights. It was in this background that Nehru uttered the famous words that ‘the judges sitting in the ivory palaces are not aware about the real needs and problems of the country’.

India would, in fact, have seen its first supersession in the form of Justice Patanjali Shastri, who Nehru wanted to supersede. Prof. Godbois recalls that Nehru preferred M.C. Chagla or Justice BN Mukherjee. However, this attempt failed as all the other six associate judges of the Court threatened to resign, if such a plan was executed. Another attempt came against Justice JC Shah, who was to succeed CJI Hidayatullah. It was believed by many, that Mrs. Gandhi wanted to bring an outsider into the Court to supersede Justice Shah. However, it was a determined Hidayatullah who threatened to resign with all the other judges (except Ray) if this was carried out. Interestingly, Justice Hidayatullah, also threatened Mrs. Gandhi that India was soon hosting an international convention of lawyers and if Justice Shah was superseded the whole world would know what happened.

The Indian Judiciary is no stranger to controversy. Be it, the recent motion to impeach CJI Mishra or the talks of superseding Justice Ranjan Gogoi, who was amongst the judges to hold the famous press conference. While writing this article, the author had hoped that the separation of power amongst the three organs of the government is allowed to exist and history, in this case, does not repeat itself.  However, interestingly on the same day as supersession i.e. 26th April i.e. today, the government has refused to clear the name of Justice K.M. Joseph, (CJ of Uttarakhand) to be elevated to the Supreme Court despite it being recommended by the Collegium led by the CJI. On this recent development happening on the same day, the author is reminded of the words of Justice Kurian Joseph, who recently opined “that Centre’s inaction would send a ‘wrong message’ to Judges that they would ‘suffer’ if they don’t tow the Centre’s line.”