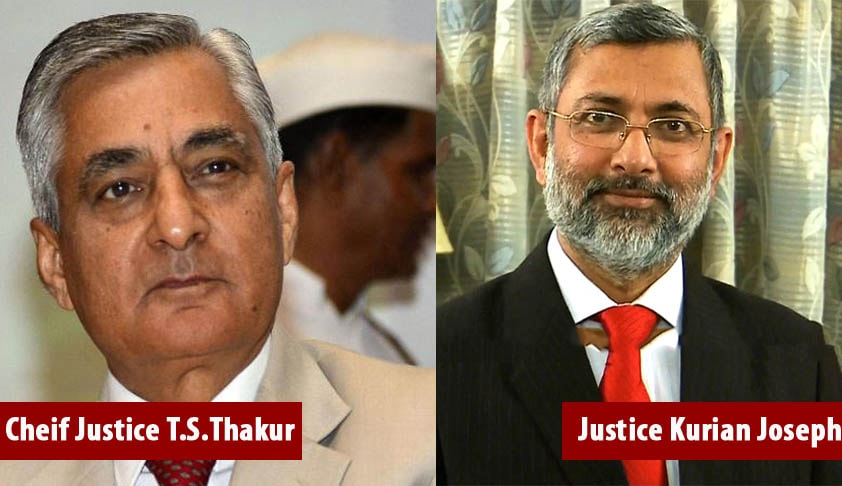 A two Judge Bench of the Supreme Court Today has issued Guidelines relating to the Appointment of Government Law Officers. The Bench comprising of Chief Justice T.S.Thakur and Justice Kurian Joseph was primarily examining the question ‘Whether appointment of law officers by the State Governments can be questioned or the process by which such appointments are made, can be assailed on the...

A two Judge Bench of the Supreme Court Today has issued Guidelines relating to the Appointment of Government Law Officers. The Bench comprising of Chief Justice T.S.Thakur and Justice Kurian Joseph was primarily examining the question ‘Whether appointment of law officers by the State Governments can be questioned or the process by which such appointments are made, can be assailed on the ground that the same are arbitrary, hence, violative of the provisions of Article 14 of the Constitution of India?’ Answering the question in the affirmative the Court has issued following Guidelines

(i) The Government and so also all public bodies are trustees of the power vested in them.

(ii) Discharge of the trust reposed in them in the best possible manner is their primary duty.

(iii) The power to engage, employ or recruit servants, agents, advisors and representatives must like any other power be exercised in a fair, reasonable, non-discriminatory and objective manner.

(iv) The duty to act in a fair, reasonable, non-discriminatory and objective manner is a facet of the Rule of Law in a constitutional democracy like ours.

(v) An action that is arbitrary has no place in a polity governed by Rule of Law apart from being offensive to the equality clause guaranteed by Article 14 of the Constitution of India.

(vi) Appointment of Government counsel at the district level and equally so at the High Court level, is not just a professional engagement, but such appointments have a “public element” attached to them.

(vii) Appointment of Government Counsel must like the discharge of any other function by the Government and public bodies, be only in public interest unaffected by any political or other extraneous considerations.

(viii) The government and public bodies are under an obligation to engage the most competent of the lawyers to represent them in the Courts for it is only when those appointed are professionally competent that public interest can be protected in the Courts.

(ix) The Government and public bodies are free to choose the method for selecting the best lawyers but any such selection and appointment process must demonstrate that a search for the meritorious was undertaken and that the process was unaffected by any extraneous considerations.

(x) No lawyer has a right to be appointed as a State/Government counsel or as Public Prosecutor at any level, nor is there any vested right to claim an extension in the term for which he/she is initially appointed. But all such candidates can offer themselves for appointment, re-appointment or extension in which event their claims can and ought to be considered on their merit, uninfluenced by any political or other extraneous considerations.

(xi) Appointments made in an arbitrary fashion, without any transparent method of selection or for political considerations will be amenable to judicial review and liable to be quashed.

(xii) Judicial review of any such appointments will, however, be limited to examining whether the process is affected by any illegality, irregularity or perversity/irrationality. The Court exercising the power of judicial review will not sit in appeal to reassess the merit of the candidates, so long as the method of appointment adopted by the competent authority does not suffer from any infirmity.

The Court was hearing Appeals relating to the appointment of Government Law Officers in Punjab and Haryana. Disposing the Petitions the Court has issued following directions to the States of Punjab and Haryana

(1) The States of Punjab and Haryana shall undertake a realistic assessment of their need in each category in which State counsel are proposed to be appointed.

(2) Based on the assessment so made, the States shall constitute a Selection Committee with such number of officers as the State Government may determine to select suitable candidates for appointment as State counsel. The Secretary, Department of Law in each State shall be the Member-Secretary of the Selection Committee.

(3) The Committee shall on the basis of norms and criteria which the Government concerned may formulate and in the absence of any such norms, on the basis of norms and criteria which the Committee may themselves formulate conduct selection of law officers for the State and submit a panel of names to the Chief Justice of Punjab and Haryana who may set up a Committee of Judges to review the panel and make recommendations to the Chief Justice. The Chief Justice may based on any such recommendations record his views regarding suitability of the candidates included in the panel. The Government shall then be free to appoint the candidates having regard to the views expressed by the Chief Justice regarding their merit and suitability. The procedure for assessment of merit of the candidates and consideration by the High Court will apply in all cases where the candidates are already working as State counsel but are being given an extension in the term of their appointment. Having said that we must hasten to add that we are not interfering with the appointments already made in the States of Punjab and Haryana which can continue to remain valid for the period the same has been made but any extension or re-appointment shall go through the process indicated by us in the foregoing paragraphs.

(4) The writ-petitioners shall also be free to offer themselves for consideration before the Committee appointed by the State Government in which event their claims may also be considered having regard to their merits, suitability and performance as State counsel for the period they have worked as State counsel.

(5) We make it clear that nothing said by us in the foregoing paragraphs of this judgment shall affect the right of the State Governments to appoint any person eligible for such appointment as the Advocate General of the State in terms of Article 165 of the Constitution of India.

(6) We further clarify that although we are primarily concerned with the procedure regarding selection and appointment of law officers in the States of Punjab and Haryana and although we have confined our directions to the said two States only yet other States would do well to reform their system of selection and appointment to make the same more transparent, fair and objective if necessary by amending the relevant LR Manuals/Rules and Regulations on the subject.