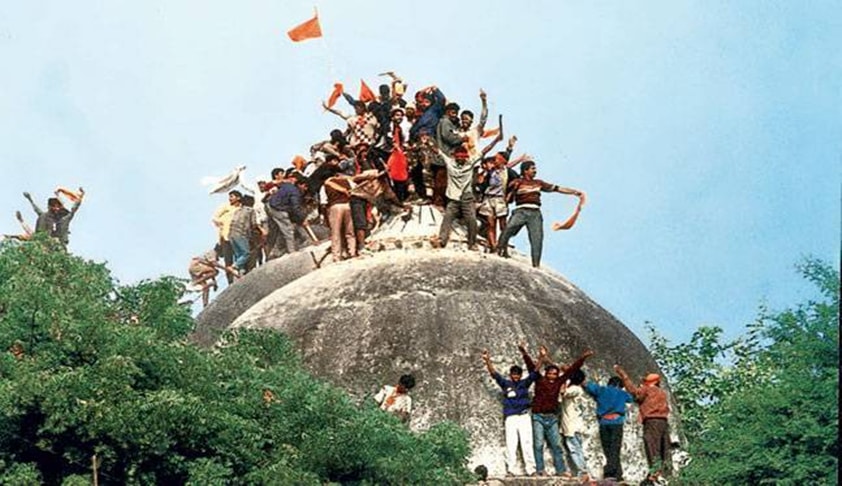 As the hearing in the Ram Janmabhoomi-Babri Masjid dispute resumed before the Supreme Court bench of Chief Justice Dipak Misra, Justice Ashok Bhushan and Justice Abdul Nazeer on Friday, senior counsel Rajiv Dhawan continued his submissions on the need to revisit the law laid down in Ismail Farooqui (1994) by a five-judge bench.He contended that the judgment in so far as it observes...

As the hearing in the Ram Janmabhoomi-Babri Masjid dispute resumed before the Supreme Court bench of Chief Justice Dipak Misra, Justice Ashok Bhushan and Justice Abdul Nazeer on Friday, senior counsel Rajiv Dhawan continued his submissions on the need to revisit the law laid down in Ismail Farooqui (1994) by a five-judge bench.

He contended that the judgment in so far as it observes that “...this right (under Article 25) does not extend to the right of worship at any and every place of worship so that any hindrance to worship at a particular place per se may infringe the religious freedom guaranteed under Articles 25 and 26 of the Constitution...”, is wrong and has the effect of reducing the scope of Article 25. “Every Jain temple or Hindu temple or church or mosque of every religious denomination is entitled to be protected...and this particular mosque (Babri Masjid) was built in 1528 by a Mughal emperor and it was rebuilt by the British in 1935...it is not possible that this mosque cannot be protected,” he submitted.

In so far as the judgment mentions that the ‘comparative significance’ of the disputed site in Ayodhya is equal to both the Hindu and the Muslim community in view of the site being the birthplace of Lord Ram and also the location of the ancient mosque, Dhawan inquired rhetorically, “Is the way to resolve an inter-community dispute to check the ‘comparative significance’? This would be a disentitlement of the Constitution.”

In this context, the senior counsel quoted former Chief Justice BN Kirpal’s observation on secularism in the 2002 judgment of TM Pai Foundation: “The one billion population of India consists of six main ethnic groups and fifty-two major tribes; six major religions and 6,400 castes and sub-castes; eighteen major languages and 1,600 minor languages and dialects. The essence of secularism in India can best be depicted if a relief map of India is made in mosaic, where the aforesaid one billion people are the small pieces of marble that go into the making of a map. Each person, whatever his/her language, caste, religion has his/her individual identity, which has to be preserved so that when pieced together it goes to form a depiction with the different geographical features of India. These small pieces of marble, in the form of human beings, which may individually be dissimilar to each other, when placed together in a systematic manner, produce the beautiful map of India. Each piece, like a citizen of India, plays an important part in making of the whole. The variations of the colours as well as different shades of the same colour in a map is the result of these small pieces of different shades and colours of marble, but even when one small piece of marble is removed, the whole map of India would be scarred, and the beauty would be lost.”

Further, in respect of the observation in the judgment that offering of prayers at every location where they could possibly be offered is not an essential or integral part of the religious practice unless that place assumes a particular significance for such a religion, he contended, “This empties out the huge protection conferred to every religious place under Article 25.”

In respect of the aforesaid observation, he had also remarked at a later stage of the hearing, “Is it practical to ask one to practice their religion elsewhere?”

Reading out the paragraph of the judgment wherein the contention that once any place has been dedicated to a mosque it remains the property of ‘Allah’ even after the mosque is demolished was refuted, Dhawan advanced, “A mosque may be destroyed but the religious sentiment associated with the place cannot be robbed...it would be different matter only in the case of State acquisition of the site or if the Muslim community confirms they do not enjoy the place for the purpose of worship anymore.”

“We have perused the Quran and the Hadith. A mosque is to be a mosque forever. The observation regarding ‘comparative significance’ may apply only in cases of acquisition when it may be possible to say that the site of any specific mosque may not be acquired...,” he continued. Justice Bhushan observed that the Ismail Farooqui judgment does not make such a distinction.

“The mosque in Mecca-Medina was built by the Prophet himself carrying each stone...such is the significance of every mosque or temple...I argue for every Muslim and every Hindu...the whole case rests on whether Your Lordships proceed on the position before (the demolition of the Babri Masjid) in 1992 or after...,” submitted Dhawan.

In so far as the Ismail Farooqui judgment affirms that a mosque shall also be subject to the Limitation Act and adverse possession, he remarked, “Limitation has nothing to do with it...”

In respect of the observation in the judgment that “...A mosque is not an essential part of the practice of the religion of Islam and Namaz. (prayer) by Muslims can be offered anywhere, even in open...”, Dhawan reiterated his statement at the previous hearing regarding Indians attending to nature’s call in the open and remarked, “We all know what India does in the open...I would hesitate to say that Muslims may also offer their prayers in the open...every temple, church, mosque or gurdwara occupies a unique position for the community...”

Thereupon, he quoted from the 1994 judgment: “...Obviously, the acquisition of any religious place is to be made only in unusual and extraordinary situations for a larger national purpose keeping in view that such acquisition should not result in the extinction of the right to practice the religion if the significance of that place be such...”

“What is the ‘larger national purpose’? Is it a political agenda? It is what was stated in the BJP White Paper, in the introduction to which Shri LK Advani has favoured the building of a temple?...Lord Rama was born seven lakh years ago...where was the precise location of the birth?...,” advanced Dhawan.

“The persons who demolished the Babri Masjid in December 1992 were no ‘miscreants’ (as referred to in the 1994 judgment), but they were two powerful ‘Rathayatras’...there was a joke before the Liberhan Commission (established to investigate the destruction of the Babri Masjid) that the calls of ‘todo, todo’ (to destroy) were actually calls of ‘chhodo, chhodo’ (to let be)...it was a strident, calculated and deliberate attempt to destroy the mosque and this must be accepted...,” he submitted.

Thereupon, the senior counsel drew the attention of the bench to the judgment of Justice BK Mukherjee in The Commissioner, Hindu Religious Endowments, Madras v. Lakshmindra (1954). The Chief Justice remarked that it is a binding precedent. Dhawan responded that the said judgment has not been followed in Ismail Farooqui.

He indicated the portion of the 1954 judgment wherein it has been observed that the right of a religious denomination to manage its own affairs under Article 26 is a Fundamental Right which cannot be infringed, while its right to acquire, own and administer property is subject to regulation by laws in the interests of public order, health and morality.

In context of the right in Article 26(d) to administer property in accordance with the law, Dhawan commented, “Some limitations may be imposed, but it cannot be questioned if the mosque is really important to the community...only Eminent Domain may stand in the way of the Muslims...only the concerns of acquisition, limitation and title have to be considered...I agree with Mr. (Harish) Salve that this is a title dispute...”.

“Ismail Farooqui does not say the mosque in unimportant...the phrase ‘comparative significance’ has been used to imply equal importance of the site for both Hindus and Muslims...,” observed Justice Bhushan.

Relying on the observation in the 1954 judgment that what constitutes the essential part of a religion is primarily to be ascertained with reference to the doctrines of that religion itself, Dhawan advanced, “How will one decide the significance of a mosque? This is why Ismail Farooqui is untenable...it is a question of injunctive relief by bringing down the mosque and resurrecting the temple (or vice versa)...one cannot lecture a community on their faith, but allow them to adduce evidence of the actual claim and throw out the claim if it is fraudulent...”

In so far as the 1954 judgment mentions “freedom or religious convictions genuinely entertained by men”, he remarked, “This goes to the heart of the ‘Essential Practices’ Doctrine’”.

Further, Dhawan recited where the 1954 judgment observes that under Article 26(b), a religious denomination enjoys complete autonomy in the matter of deciding as to what rites and ceremonies are essential according to the tenets of the religion they hold and no outside authority has any jurisdiction to interfere with its decision. “Even the courts do not have the jurisdiction to state that in practising their faith, Muslims may pray anywhere,” he contended.

Finally, he quoted from the 1954 judgment that a law which takes away the right of administration from the hands of a religious denomination altogether and vests it in any other authority would amount to a violation of the right guaranteed under clause (d) of Article 26.

“... The free exercise of religion by which is meant the performance of outward acts in pursuance of religious belief...,” he quoted, remarking, “the outward expression of the Islamic faith is the mosque”.

The Supreme Court judgment in Sri Venkataramana Devaruand v. State of Mysore (1957) was also referred: “It being thus settled that matters of religion in Article. 26(b) include even practices which are regarded by the community as part of its religion...”

“Then the Parliament, in Section 5 of the Act, excluded the statute’s applicability to the Ayodhya dispute...,” he continued, clarifying that the said provision has not been challenged.

“The placing of Hindu idols in the disputed structure on December 22/23, 1949 was a gross violation of the principle of secularism...the constitution was in force then...I do not mean ‘secularism’ in a scientific way but by way of equal treatment to all...then what happened in 1992 was a barbaric act...,” concluded Dhawan.

The hearing shall resume on April 6.