Ayodhya [Day-4] Constitution Bench Must Hear This Case Since The Judgment Will Have A Vital Bearing On The Social Fabric Of The Country-Raju Ramachandran, No Need, This Is Just A Property Dispute-Salve [Read Order] 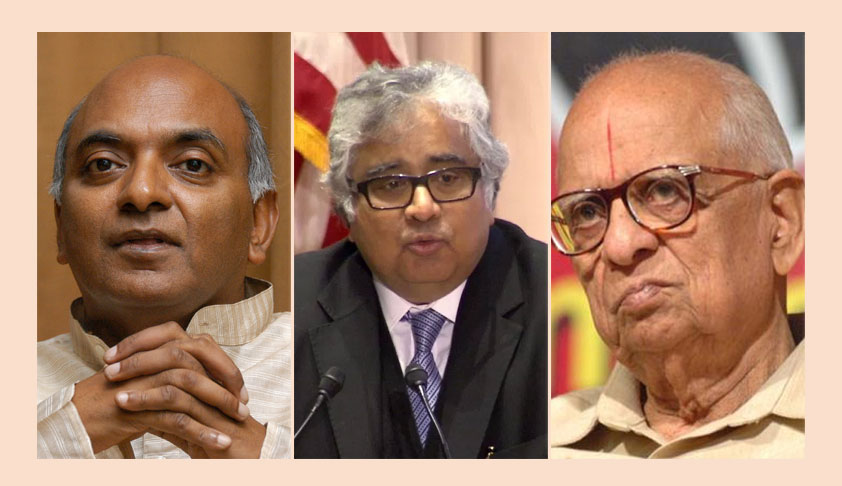 As the hearing in the string of appeals preferred against the 2010 judgment of the Allahabad High Court in the  Ayodhya [Ram Janmabhoomi-Babri Masjid] resumed on Friday before the Supreme Court bench of Chief Justice Dipak Misra, Justice Ashok Bhushan and Justice Abdul Nazeer, Senior Counsel Raju Ramachandran informed the bench of the absence of Senior Advocate Rajiv Dhawan on account of...

As the hearing in the string of appeals preferred against the 2010 judgment of the Allahabad High Court in the  Ayodhya [Ram Janmabhoomi-Babri Masjid] resumed on Friday before the Supreme Court bench of Chief Justice Dipak Misra, Justice Ashok Bhushan and Justice Abdul Nazeer, Senior Counsel Raju Ramachandran informed the bench of the absence of Senior Advocate Rajiv Dhawan on account of his health.

At the previous hearings, Dr. Dhawan had argued on the legality of the 1994 apex court judgment in Ismail Farooqui and how it permeated into the impugned judgment of the Allahabad High Court in order to convince the bench to make a reference to a larger bench for the reconsideration thereof.

Mr. Ramachandran sought the permission of the bench to advance submissions on the “utmost importance of the Ayodhya case from the institution of the suits till the proceedings before the Supreme Court”.

“The matter needs to go to a five judge bench for its sheer importance”, he contended.

He drew the attention of the bench to the 1989 order of a division bench of the Allahabad High withdrawing the aforesaid suits from the Courts of the Addl. District Judge and Civil Judge of Faizabad for trial and disposal by the High Court, and requesting the Chief Justice to nominate a third Judge so that a Full Bench may hear these matters.

The UP state government had in 1987 moved an application under Section 24 read with section 151 of the C.P.C., requesting the High Court to withdraw all the suits pending in the Court below. Another Application, for similar relief, was filed in 1989, on the administrative side, requesting for an early disposal of the earlier application. The High Court had noted the government’s submission that “though the dispute is purely of a civil nature, it has assumed importance in the context as it sometimes excites religious sentiments and generates tension between two communities”. The division bench also agreed that “Since the state was concerned in preserving amity and brotherly relations between the two communities”, an early disposal was necessary.

Ramjanmabhoomi-Babri Masjid [Day-3]: 'If Polygamy Matter Can Be Referred To Constitution Bench, Why Can't This Serious Issues Be Referred?' Asks Rajeev Dhavan

Requesting the bench to treat this order as his submission, he elaborated, “these suits were heard and disposed off by a full bench of the Allahabad High Court...Normally, in High Courts, full benches are constituted in the event of conflicting opinions, but here, it was set up on account of the sheer importance of the case and the background, as it existed then...it was in consideration of the significance of the matter that a High Court which does not have an original jurisdiction had withdrawn the suits to itself and set up a three judge bench to hear them...”

Indicating the Presidential Reference dated January 7, 1993 under Article 143(1) for opinion on “Whether a Hindu temple or any Hindu religious structure existed prior to the construction of the Ram Janma Bhumi-Babri Masjid (including the premises of the inner and outer courtyards of such structure) in the area on which the structure stood?”, Mr. Ramachandran advanced, “if the Supreme Court had not refused to answer the Reference, the consideration of the question referred and the rendering of opinion thereon would have been undertaken by a five judge bench...and that would have been an original proceeding as the suits stood abated then...”

The Senior Counsel on Friday also referred to the 1994 Criminal Contempt Petition (Rajiv Dhawan v. Gulshan Kumar Mahajan) against Vishwa Hindu Parishad leader Giriraj Kishore for having made malicious remarks in connection with the Ayodhya dispute, which tantamount to scandalizing the apex court and lowering its authority. The petition was disposed off by a five judge constitution bench of the Supreme Court in 2014.

Mr. Ramachandran on Friday also quoted the order dated June 19, 1984 delivered by former Supreme Court Justice E. S. Venkataramiah in Ram Jethmalani v. UOI in the light of the situation prevailing in the state of Punjab at that time- “I, however, feel that the questions involved are too large and complex for the shoulders of a Single Judge to bear. It is my humble view that these and other cases of like nature should be heard by at least seven learned Judges of this Court whose unquestioned judicial authority, erudition and acumen would be of great assistance in the restoration of peace in one of our great States known for the valour, the devotion, the spirit of sacrifice and the sense of duty towards the country of the people residing in it”.

“Justice Venkataramaiah was sitting in a Vacation bench on that day”, advanced the Senior Counsel.

Next, He indicated the order of a Supreme Court division bench for reference to a larger bench the interpretation of Article 535 of the Portuguese Civil Code and the applicability of the Limitation Act to the state of Goa [order dated November 2, 2000 in Syndicate Bank v. Prabha D. Naik]

He also relied on inter alia the reference of the question of equality of railway pensioners “to be decided by a bench of five judges or atleast three judges” in view of the “financial implications to the Railways”; reference to a larger bench in the Sahara case; and most recently, the March 26 order for determination by a constitution bench the constitutionality of the practices of polygamy and Nikah-halala.

“Sometime back, one single judge’s (Justice C. S. Karnan) actions were considered so important that he was dealt with by 7 judges...”, he continued in the same thread.

“The decision in this case will have a vital bearing on the social fabric of the country as two major communities are involved...in this background of a long litigation dating back to the mid-19th century, it is undeniable that this dispute is sui generis and important in the the life of the nation...these appeals have been preferred by both sides as neither side is happy with the decision of the Allahabad High Court...this Court is hearing the first appeal therefrom and since this would be the final determination of the legal dispute, it warrants a reference to a five judge bench...the nature of this case justifies the time of five judges in deliberating over the questions of fact...”, submitted Mr. Ramachandran.

He also relied on Order 6 Rule 2 of the Supreme Court Rules of 2013 as the “enabling provision”, and the Handbook for Practice and Procedure.

Further, he read excerpts from the ‘White Paper on Ayodhya’ issued by the Government of India in February, 1993- “ The demolition of the Ram Janma Bhoomi-Babri Masjid structure at Ayodhya on 6th December, 1992 was a most reprehensible act. The perpetrators of this deed struck not only against a place of worship, but also at the principles of secularism, democracy and the rule of law enshrined in our Constitution...What happened on December 6, 1992 was not a failure of the system as a whole, nor of the wisdom inherent in India's Constitution, nor yet of the power of tolerance, brotherhood and compassion that has so vividly informed the life of independent India. It was, the Supreme Court observed on that day, ‘a great pity that a Constitutionally elected Government could not discharge its duties in a matter of this sensitiveness and magnitude’...”

“This matter has occupied national discourse in so far as the Supreme Court had expressed its anguish, the government of India had issued a White Paper and a major political party (BJP) had also published a White Paper explaining its view point...these suits have become so embroiled in the history of India that five judges are needed to deliberate on the issue...”, argued Mr. Ramachandran.

Responding to Mr. Ramachandran’s argument, Senior Counsel Harish Salve advanced, “this country has moved away from the events of 1992...let us leave it there...the present appeals have to be decided on evidence and in accordance with the law, which Your Lordships are doing...the issue came in the public domain in a completely different manner when the suits were filed...now it is a property dispute, so please decide it like a title suit...since it is an important case, it is being heard by three judges to avoid any conflict in opinion...if at a later stage, Your Lordships deem it necessary, the matter may be referred to a larger bench...such factors as political sensibilities, sensitivities of my friends on my left, religious sentiments and what the TV would report in the evening should remain outside of this courtroom...constitutional sensitivity is what matters...please start the hearing on the title suit...Justice Venkataramiah’s order was on a larger constitutional question in context of the Cr. P. C...similarly, questions like the validity of the practice of divorce in a particular religion are different...this case has been raised beyond its stature...there is not a single property dispute that may have been referred to a constitution bench...please do not take congnizance on such contentions that the case would stir religious sentiments unless Dr. Dhawan convinces Your Lordships of the constitutional sensitivity...”

Controverting Mr. Salve’s contention, Mr. Ramachandran argued, “the country is far away from the events of 1992 and that this matter is a mere property dispute is a denial...this is a matter of everyday discourse...As Mr. Salve said that for a matter to be heard by a five judge bench, it must touch upon the constitution, this case is on the constitutional ethos...”

Thereafter, Senior Counsel K. Parasaran also advanced submissions on behalf of the respondents- “this is a constitutional court dealing with deprivation of life and liberty and hence, criminal appeals are heard...but so far as civil matter are concerned, the same may be heard only of they involve a substantial question of law or of public importance...and for such disputes, a three judge bench suffices...it is the cases of statutory vires that may require a five judge bench...this is not such a sensitive case or a matter of such national importance which would warrant the time of five or seven judges...we already have the judgment of a five judge bench here...under the Government of India Act of 1935, the civil appellate jurisdiction of the Federal Court was exercised in respect of appeals in Income Tax matters. The Constitution has for the first time conferred this power on the Supreme Court...”.

Finally, Senior Counsel S. K. Jain submitted, “Your Lordships may make the reference to a larger bench either at the threshold or at a later stage...Article 145 makes this distinction...in other than writ matters, Your Lordships may apply your mind on the principle of law before deciding to make a reference...”. He mentioned the May, 2007 judgment of the apex court in Ashoka Kumar Thakur v. UOI, formulating certain questions for consideration by a larger bench in respect of the validity of the Constitution (93rd Amendment) Act of 2005.

The matter is scheduled for further hearing on May 15.