[Ayodhya] “Here Is A Small Piece Of Land Where Angels Fear To Tread”: SC Reminds About Messages Given By Justices JS Verma & Justice SU Khan 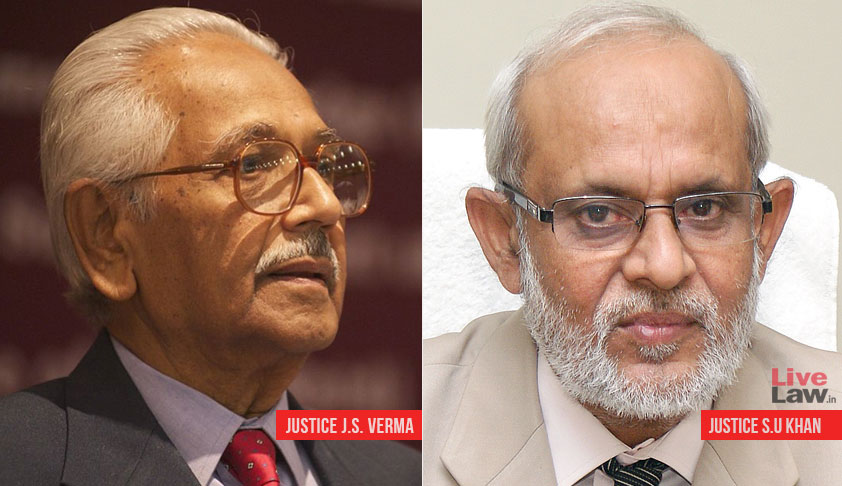 “We are confident that observations made by Justice S.U. Khan of Allahabad High Court as quoted above as well as observations of Justice J.S. Verma made in paragraph 156 of the judgment are observations which shall guide both the communities in their thought, deed and action.”The majority judgment penned by Justice Ashok Bhushan which turned down the plea to refer Ismail Faruqui judgment...

“We are confident that observations made by Justice S.U. Khan of Allahabad High Court as quoted above as well as observations of Justice J.S. Verma made in paragraph 156 of the judgment are observations which shall guide both the communities in their thought, deed and action.”

The majority judgment penned by Justice Ashok Bhushan which turned down the plea to refer Ismail Faruqui judgment to the Constitution Bench makes an interesting conclusion by quoting from judgments of two judges and also invoking Emperor Asoka and former President Dr. S. Radhakrishnan.

Before we close we remind us as well as members of both the major communities of this country, Hindus and Muslims, the thoughtful message given by Justice S.U. Khan in his judgment as well as the words of Justice J.S. Verma, speaking for majority in   Ismail Faruqui’s case, reads the judgment.

Justice Sibghat Ullah Khan was one of the judges of the full bench of the Allahabad High court that decided the Ayodhya case. The following passage from his judgment is quoted by Justice Ashok Bhushan: “Muslims must also ponder that at present the entire world wants to know the exact teaching of Islam in respect of relationship of Muslims with others. Hostility­ peace friendship­ tolerance­ opportunity to impress others with the Message­ opportunity to strike wherever and whenever possible­ or what? In this regard Muslims in India enjoy a unique position. They have been rulers here, they have been ruled and now they are sharers in power (of course junior partners). They are not in majority but they are also not negligible minority (Maximum member of Muslims are in huge majority which makes them indifferent to the problem in question or in negligible minority which makes them redundant. Indian Muslims have also inherited huge legacy of religious learning and knowledge. They are therefore in the best position to tell the world the correct position. Let them start with their role in the resolution of the conflict at hand.”

Justice Verma’s observation in Ismail Faruqui case has also been reproduced in this judgment. It reads: “Hinduism is a tolerant faith. It is that tolerance that has enabled Islam, Christianity, Zoroastrianism, Judaism, Buddhism, Jainism and Sikhism to find shelter and support upon this land. We have no doubt that the moderate Hindu has little taste for the tearing down of the place of worship of another to replace it with a temple. It is our fervent hope that that moderate opinion shall find general expression and that communal brotherhood shall bring to the dispute at Ayodhya an amicable solution long before the courts resolve it.”

With this, the bench ‘reminds’ of rich culture and heritage of this ancient country which has always been a matter of great learning and inspiration for the whole world. It also quotes from former President Dr. S. Radhakrishnan, celebrated book “The Hindu View of Life” while dealing with the subject of “conflict of religion”.

The bench also quotes from the Twelfth Rock Edict of the great King Asoka: "'The King, beloved of the Gods, honours every form of religious faith, but considers no gift or honour so much as the increase of the substance of religion; whereof this is 109 the root, to reverence one's own faith and never to revile that of others. Whoever acts differently injures his own religion while he wrong's another's.' 'The texts of all forms of religion shall be followed under my protection.'”

With all these quotes, the bench remarks: “We are confident that observations made by Justice S.U. Khan of Allahabad High Court as quoted above as well as observations of Justice J.S. Verma made in paragraph 156 of the judgment are observations which shall guide both the communities in their thought, deed and action.”

In his dissenting opinion, Justice Abdul Nazeer also quotes Justice SU Khan’s observation made in the high court judgment to show ‘importance and seriousness of the matter’. It reads: “Here is a small piece of land (1500 square yards) where angels fear to tread. It is full of innumerable land mines. We are required to clear it. Some very sane elements advised us not to attempt that. We do not propose to rush in like fools lest we are blown. However, we have to take risk. It is said that the greatest risk in life is not daring to take risk when occasion for the same arises. Once angels were made to bow before Man. Sometimes he has to justify the said honour. This is one of those occasions. We have succeeded or failed? No one can be a judge in his own cause. Accordingly, herein follows the judgment for which the entire country is waiting with bated breath."

Given the fact that the Supreme Court bench has quoted in approval of some observations by Justice SU Khan, it is important to read what he ordered in the Ayodhya case.